They were known as the queens of the sky, and were the largest machines ever to fly. The rigid airships, called zeppelins, flying in the 1920s and 1930s, became the most sought after aircraft during the aviation craze of the time. Politicians and civic leaders requested their appearance at events or to fly over their cities.

The Navy’s first rigid airship, the 695-foot USS Shenandoah (ZR-1), had ties to the Evansville area. Commander Ralph Weyerbacher of Boonville, Indiana, supervised her construction and the wife of Evansville-born Secretary of the Navy Edwin Denby christened her. At the end of September 1923, it was decided to take the still unnamed ZR-1 on a final nonstop roundtrip flight between Lakehurst, New Jersey, and St. Louis. Local connections and lobbying altered the ship’s flight path south 200 miles so it would pass over both Boonville and Evansville. Arriving Oct. 1, 1923, at Boonville near midnight, the airship circled the town as Commander Weyerbacher dropped notes and flowers to his family. The ship passed over Evansville silhouetted in the moonlight; a spotlight from the USS Kankakee was directed upon it. More than 5,000 people gathered in Sunset Park, with many more in yards and on rooftops, to await the arrival of the Navy dirigible. After passing over the Soldiers and Sailors Memorial Coliseum, the airship continued on toward St. Louis.

On Oct. 25, 1924, zeppelins were again in the news. The USS Shenandoah had flown to the Pacific coast and the Navy’s newest airship, the Los Angeles, had just completed her trans-Atlantic flight from Germany. On Oct. 24, an announcement was made that the course for the Shenandoah’s return flight from Texas had been altered so the airship would again pass over Evansville. As dawn began to break on Saturday morning, early risers and people who had spent the night watching for the dirigible could hear the steady drone of the Shenandoah’s engines. Approaching from Kentucky, the ship passed over the McCurdy Hotel at about 1,200 feet and then continued east toward the rising sun.

On Oct. 16, 1931, Evansville residents received one more chance to see a zeppelin. The newest airship, the 785-foot USS Akron, made a final test flight required for Navy acceptance. After passing over the still incomplete Dade Park Bridge (today the northbound Bi-State Vietnam Gold Star Bridge in Henderson, Kentucky), the Akron crossed over Fourth Street at about 1,500 feet. The scream of the water works whistle brought thousands of people into the streets to see the dirigible pass over in the darkening sky. The lights of the Akron were visible to residents for almost a half hour. After the Akron’s visit, the age of the zeppelin soon ended. To this day, all other aircrafts flown over the city have been dwarfed by comparison. 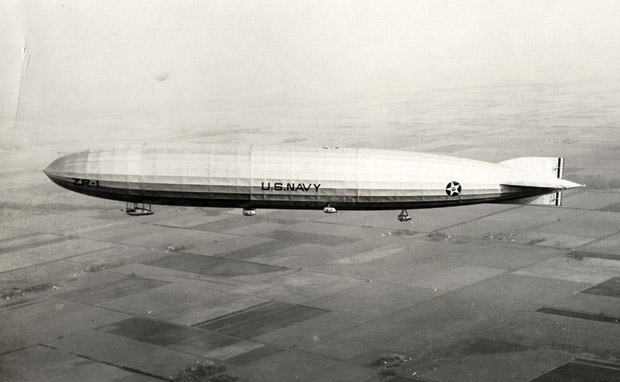