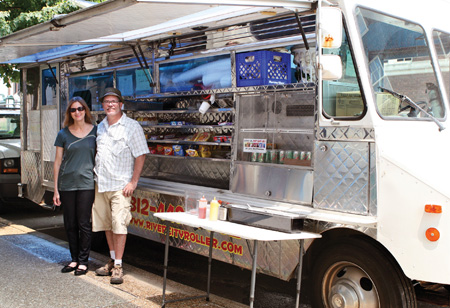 Mike McAtee hails from Austin, Texas, where burrito trucks are as common as cowboy boots. The transplant and his wife Kay had toyed with bringing a food truck to Evansville for years. They bought Zesto, a drive-in restaurant, in February 2009. “Fifteen minutes into ownership,” McAtee says, “all thoughts of a truck went completely off the table.” Owning a restaurant, they learned, is harder than it looks.

Still, thoughts of a “café on wheels” persisted, and in November 2010, the McAtees flew to Phoenix to buy a truck that would become the “River City Roller” — the mobile counterpart to Zesto on Franklin Street. It took four long days, one flat tire, and a visit from a New Mexico State Trooper, but they eventually parked the Roller near Sixth and Main streets Downtown.

There, they serve a menu of breakfast and lunch items — such as tenderloins, chicken strips, and some Tex-Mex selections — from a grill larger than the one at Zesto. But overall, the space is pretty cozy, and the three employees on the truck with no air conditioning better like each other.

Construction workers for the new arena make a “great client base,” McAtee says, and one of the most popular combos is the double jumbo cheeseburger and fries. I ordered the un-supersized version of the meal (a single jumbo cheeseburger and fries). The portion was still generous. All meals are made to order, so the burger was hot, and the cheese was melted (not heat-lamp congealed). My crinkle-cut fries were fresh-out-of-the-grease hot.

The Roller is open from 9 a.m.–1 p.m. Monday through Friday until the end of summer at the corner of Sixth and Main streets. The Roller accepts orders via phone calls or text messages for pickup. To place an order or schedule event catering, call or text 812-449-5362. Credit cards accepted.
Share
Facebook
Twitter
Previous articleNostalgic and New
Next articleSummer Salad