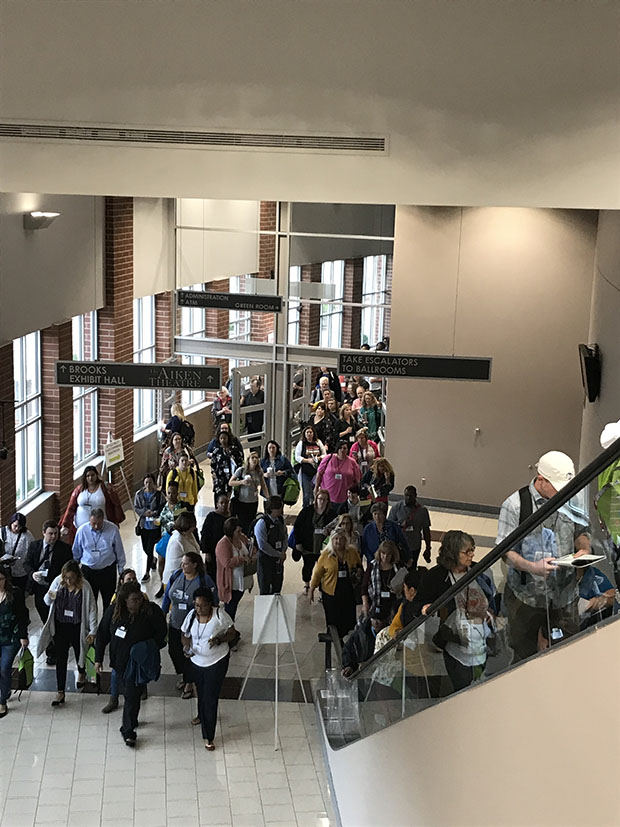 Tourism and hospitality is a $700 billion industry according to the Bureau of Labor and Statistics that is focused on bringing in visitors to stay in local hotels, eat at restaurants, and shop at stores. But perhaps no market suffered more from the crisis of this past year than the fifth largest industry in the country.

As the pandemic raged across the United States 96 percent of companies that hosted or produced events had to cut staff or wages. These were the group of workers most affected by the pandemic as 75 percent of employees in the hospitality or events industry lost all of their income.

That impact was felt particularly in Evansville, though not as much as larger cities. In 2020, local hotel revenues were down 39.3 percent with occupancy down around 28 percent. The city still exceeded larger regional cities like Indianapolis, Indiana and Louisville, Kentucky by 4.8 percent and 8.9 percent.

The major loss of events and connected revenue forced the CVB to adapt in ways they never before had done. They immediately reduced their operating budget from $1.8 million to $1.2 million and put a hold on all 2020 advertising. They also closed their Visitor’s Center, the Pagoda along the Riverfront in Downtown Evansville, to the public. 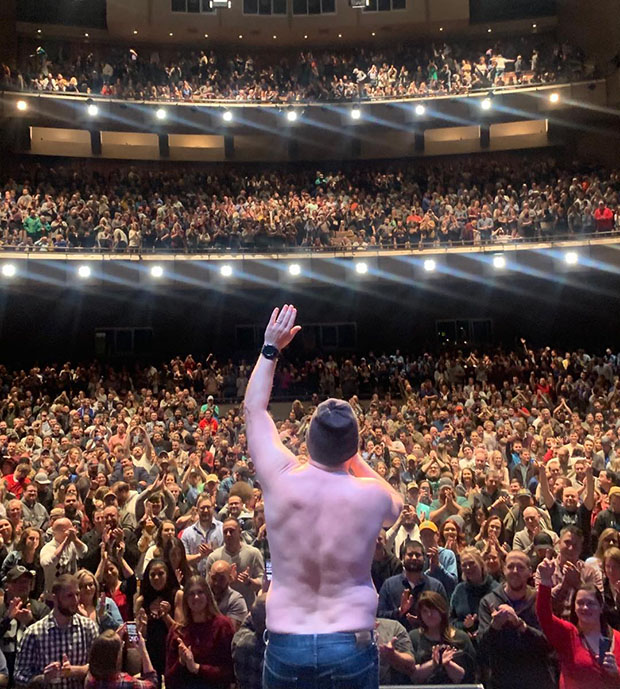 “For us as an industry, we saw this as certainly square on our radar screen, that it was going to have a significant impact as everything came to a halt when people could no longer meet and gather,” says Jim Wood, president and CEO of the CVB. “We were hoping it was going to be a short term impact, so we started seeing some cancellations leading into the March, April, June dates and then as we got into over the next couple of months, then we saw cancellations for the remainder of the year with a higher level of uncertainty of what the future was going to hold for those events.”

It’s been the uncertainty that Wood says has been the difficulty trying to get things back to normal. He says many of the events scheduled in 2021 were rebooked in hopes they could get back to normal, but many were more confident about meeting in 2022 than in 2021.

“That type of scenario has been playing out all across America and for us as well,” he says. “Some events have rebooked, so if we spent a lot of our time helping and assisting those conventions that were booked, trying to rebook for future years or we couldn’t, then we had to work on releasing them from their contracts because this was a unique situation.” 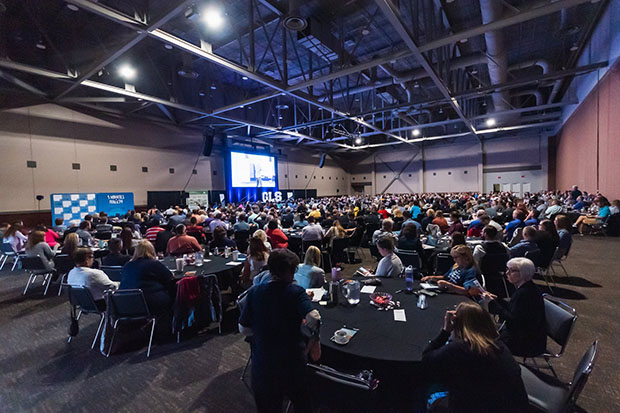 Wood adds that the good news is activity is perking up and events are scheduled for later this year and into 2022 and 2023, when he expects a full return to 2019 levels.

Events that were rebooked include the National Beta Club Indiana State Convention in 2021, the 2021 Massey Expo of North American, the Indiana League of Municipal Clerks and Treasurers, and the International Jugglers Association Festival in 2025.

This also includes tournaments scheduled this summer at the Deaconess Sports Park at 6800 N. Green River Road. Unlike many other events, the Sports Park did host 19 tournaments last summer under strict social distancing guidelines with 829 teams participating, though still far from the usual 30-plus tournaments it hosts each summer. The adjacent Goebel Soccer Complex hosted two tournaments with 100 teams participating. Though attendance was still down by 40 percent, the economic impact from both complexes total $10.3 million. 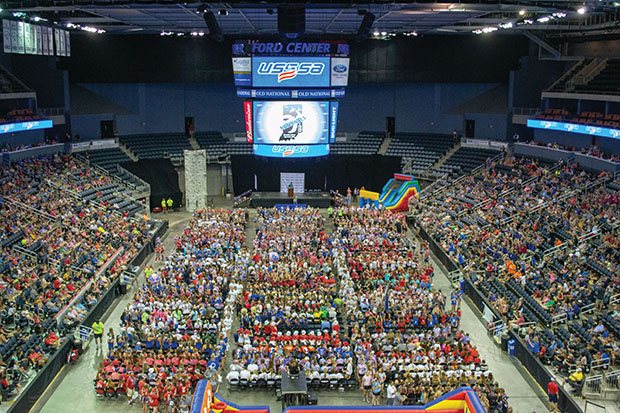 Amateur sports are Evansville’s largest tourism market. Aside from the sports complexes that host a large number of youth sporting events each year, Bosse Field, which is home to the Frontier League baseball team the Evansville Otters, attracts a large base of local and regional sports fans each summer. The Ford Center, Swonder Ice Arena, and Old National Events Plaza also host many sporting events from hockey to basketball.

The Deaconess Aquatics Center, which is expected to open in July 2021, will also attract more sporting events to the area. The $28 million facility will have a stretch 50-meter pool plus separated diving wells with just under 1,000 seats for spectators with the ability to accommodate more than 1,000 bleacher seats on the pool deck.

Despite successful tourism from local youth sports tournaments through the years, Evansville has struggled to find its footing as a destination for tourists, largely due to a lack of a downtown convention hotel.

The city’s main convention hotel, the Executive Inn, was torn down in 2011 to make room for the Old National Events Plaza and the Ford Center. The Old National Events Plaza was opened as The Centre in 2000 without a downtown convention hotel despite its main purpose of hosting conventions. This remained for 17 years before the Hilton DoubleTree opened on Valentine’s Day 2017. This has brought other hospitality companies to look at Evansville as a city to invest in, including Hyatt Place, located at the corner of Second Street and Chestnut Street in Downtown Evansville, which is expected to open within the next couple of months. 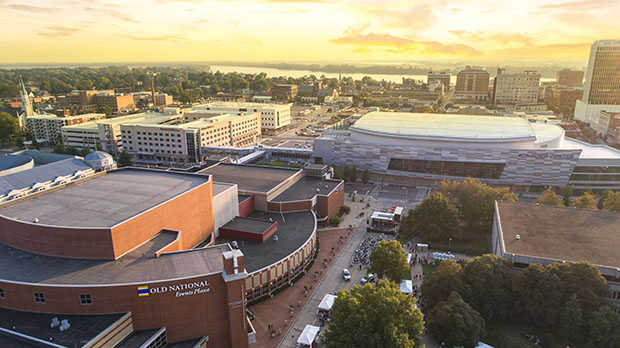 “We’re excited for the opening of the Hyatt Place and know that it will bring additional room nights and their associated restaurant and retail activity to Downtown Evansville,” says Josh Armstrong, President of the Downtown Evansville Economic Improvement District.

The victory of a returning convention hotel was short-lived, however, as the world came to a screeching halt in early 2020 because of the COVID-19 pandemic.

In 2020, Innkeepers tax revenues were down 37.3 percent. The CVB, which reports to the Vanderburgh County Council and Commission, is funded through the county Innkeepers tax. Revenue from the tax is distributed among the CVB for sales and marketing promotion, the Tourism Capital Improvement Fund — which is designed to support facilities and events to increase tourism and hotel occupancy in Vanderburgh County — and the Old National Events Plaza.

“It was pretty significant in terms of the monies that were brought in to support both organizations, which ultimately drives tourism to town,” says Alexis Berggren, general Manager of the Old National Events Plaza. 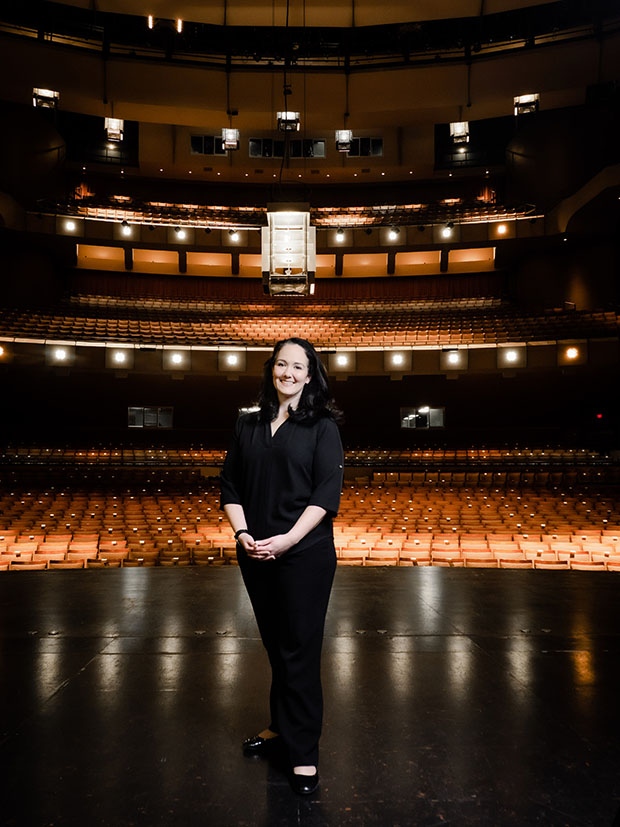 The Old National Events Plaza alone lost about $10.7 million from cancelled scheduled events in 2020 — that’s in addition to the $22.1 million reported by the CVB. Berggren says they’ve already lost about $2 million this year from events that would have been held in 2021.

In 2020, more than 80 percent of the Events Plaza’s forecasted events were either cancelled or postponed, a huge step back from their 365 event days in 2019.

After being shut down for 11 days after their last event on March 11, the Events Plaza was asked to reopen to host emergency and essential meetings for the city and county, which they continued to do for the next several months. They also become a satellite location for the courts.

When they opened back up to small, public events in October of last year, they made sure requirements were in place to handle pandemic protocols. Social media videos were created to explain to ticket purchasers the Event Plaza’s procedures. They also invested in touchless technology to cut down on interactions between guests and staff as well as self-scanning ticket kiosks and mobile apps for concession purchases. Berggren says the shift to more technology-based services was a long time coming and an aspect of pandemic-era live events that will stay in the future.

She says handling social distancing was the biggest challenge the Events Plaza faced from the pandemic, particularly in its financial implications. “A lot of theatres and arenas and venues have found the math just doesn’t work at any sort of half capacity,” she says. “Even if you are seating a social-distanced venue, you have to open up the whole venue, so it doesn’t necessarily help in terms of cost savings on utilities or staffing because it’s still the whole venue, it’s just less people.” 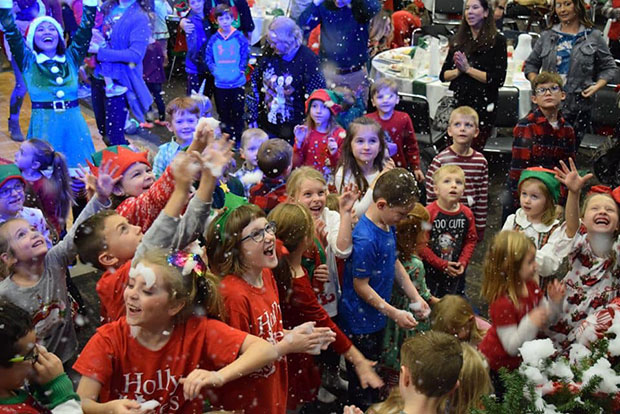 Though the tourism and hospitality industry has suffered immensely from the pandemic, the outlook is not all dreary.

Full capacity shows are expected to come back in August with public, ticketed events resuming in the Aiken Theatre at a limited capacity beginning June 23. Many of the larger events will come back in 2022.