A Double Edition for a Dramatic Story

I did not visit the Titanic Museum Attraction in Pigeon Forge, Tennessee, expecting to have a strong 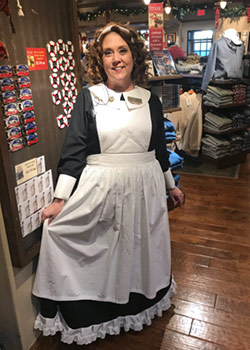 Evansville encounter. Those who maintain Evansville, Indiana, is the center of the universe, evidenced by the experiences we have everywhere we go, will, however, not be surprised.

We had just completed our five-course meal — surf and turf — with the captain of the Titanic in the ship’s extravagant dining room. Our group of journalists had been invited to talk with the “captain,” as well as Mary Joslyn, who along with her husband John is the owner and developer of the Titanic Museum Attractions in Branson, Missouri, and Pigeon Forge. As lead employee trainer Jodi Trees Justus prepared to lead us on our tour, she asked where each of the journalists was from. “Evansville, Indiana,” I replied. “Southwestern Indiana, across the Ohio River from Kentucky and near the Illinois border.”

“Evansville!” Ms. Justus exclaimed. “I know Evansville! My daddy was a state trooper who was killed in the line of duty in Princeton, Indiana, when I was just 1. There’s a sign — much larger than we thought it would be — over the Patoka River Bridge outside Evansville on I-69. My daddy’s sign can be seen going north; another officer is honored going south.”

I was stunned. I knew the sign; I knew her father’s name from the sign. I didn’t know her story. As Jodi hurriedly told me what happened on June 26, 1972 — lest we hold up the tour — I hugged her and vowed to learn more and write about Jodi and her father. She showed me photos on her phone — “I was a daddy’s girl,” says Jodi. Her photos show the young officer cradling his baby girl; another shows the state trooper looking rather stoic and brave.

Jodi told me of a story Courier & Press writer Mark Coomer wrote in 2007 about the police chase that ended her father’s life. I found the story titled, “A Crash One Night,” available for a small fee on Newspaper Archives. You can read an abbreviated text of what happened that night here: https://www.odmp.org/officer/13431-trooper-william-joseph-trees.

I reached out to Sgt. Todd Ringle, public information officer for the Indiana State Police, to learn more about the history of the Memorial Bridge Project and the ISP’s efforts to honor fallen troopers. Sgt. Ringle reported three retired Indiana State Troopers (Sgt. Jim Nelson, First Sgt. Greg Oeth, and Sgt. Wayne Flick) approached Indiana Senator Jim Tomes of Wadesville to sponsor memorials on Indiana highways to honor three southwestern police officers killed in the line of duty. Senator Tomes authored resolutions that passed the Senate and the House during the 2013 General Assembly. On March 4, 2013, members of the Trees family stood alongside family members of the other two fallen officers as the resolution was read to the Senate.

A little over two months later, Jodi Trees Justus, her mother Marsha Trees Ayers, and her brother William Joseph Trees Jr., born six months after his father’s death, returned to southern Indiana for the dedication of the sign on I-69 on the Patoka River Bridge at the Gibson and Pike county line. The Southbound Bridge is dedicated to Oakland City Officer Michael Deno, who also was killed in Gibson County. A third sign on I-64 on the bridge over Big Bayou River in Posey County honors Sgt. John E. Hatfull. 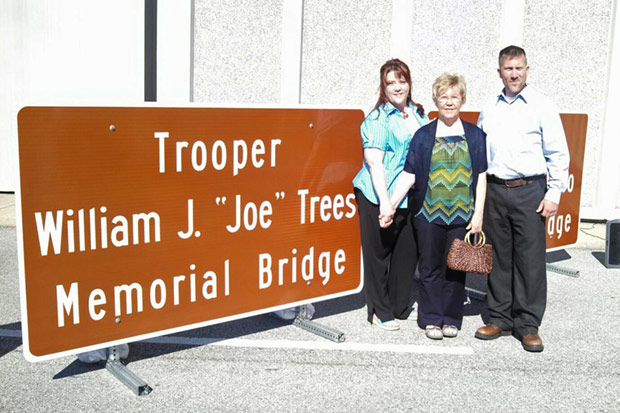 Each year in the spring, the Indiana State Police honor the sacrifice of those who have died with a memorial service. The service begins with a traditional roll call of ISP units killed in the line of duty, and after each name is called, troopers fire off a single shot. Jodi says she has returned to most of these ceremonies.

Sgt. Ringle says the case on Jodi’s father is still open. Forty-eight years later the ISP would like to identify the speeding motorist whose chase caused the fatal accident. Jodi grew up believing her father died as the result of an accident; she had not considered a crime had taken place until she was interviewed by Coomer in 2007. At the time, an officer had told her, “This case is still open. We had a lead on it this last week.”

Jodi promises to look me up if she comes to southwestern Indiana for the annual observation.

If you have any information about this case, please contact the Indiana State Police at 812-867-2079. 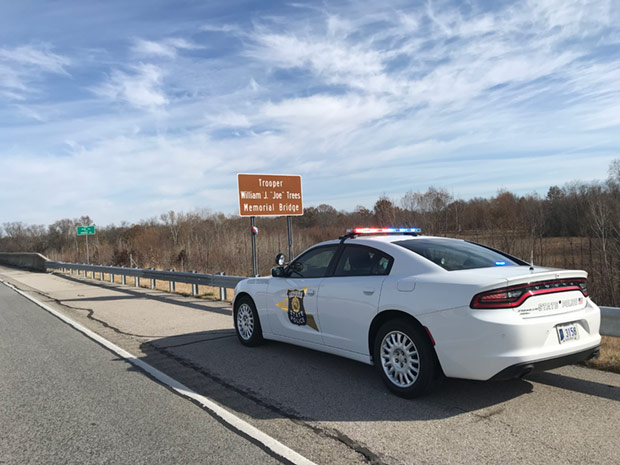