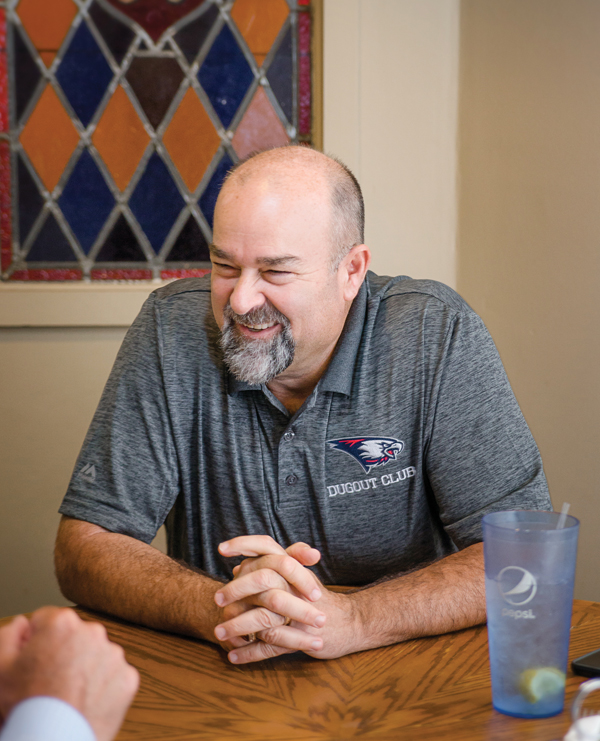 Take a minute and think of a few community leaders, people you do business with, or perhaps engage with in the nonprofit world. You’re familiar with them, you see them often, but how much do you really know? Every issue, I will take someone in the community who we all “know” and get the story behind their story. Lunch will be on me (how else could I get anyone to go to lunch?) and we will talk about all things non-business.

For this issue, Ron Ryan, Boys & Girls Club executive director, and I met at the Deerhead Tavern on April 3 for a lengthy discussion.

TT: Ron, I know you are a native of Chicago, right?

RR: Born in Chicago. I was born on the west side. That’s where my parents, when they were first married, lived. But they bought a house when I was 1, and we moved to the south side of Chicago. So that’s where I grew up. That’s where I went to grammar school, elementary school, high school.

I stayed home and went to Moraine Valley Junior College because of a bad accident I was in. Two weeks after I graduated from high school, I was in a motorcycle accident. Broke my femur, pelvis, hip, two toes came off, tore my Achilles tendon, tore my hamstrings; I couldn’t walk.

I ended up playing baseball there, at the community college. Then, I went to the University of Illinois at Chicago, so then I lived in downtown Chicago. I got a master’s degree at Chicago State, and then another master’s at Governors State (University Park, Illinois).

TT: How did you meet your wife Chris? (Ron’s wife is Chris Ryan, CEO of Deaconess Women’s Hospital.)
RR: I was a student at UIC. We had our end-of-the-year baseball banquet. They invite all the alumni back, and we meet on campus to celebrate the year. After that, a bunch of us went out in downtown Chicago, and I met Chris there, on Division Street at a bar called the Hangge-Uppe. I think it’s still there. It’s around the corner from Mother’s; that was the famous place, on Rush Street.

TT: How long did you date?
RR: Our first date was at Wrigley Field, May 1984. Afterwards, I told her I had just enlisted in the military and was going on July 3. She thought I was joking at first; then, she quickly came to realize I was not joking. School was out, so we spent the next two months pretty much with each other every day.

On July 3, I went to Fort Leonard Wood, Missouri. She ended up picking me up from there when I was done with basic training. We wrote every day. Back then we didn’t have cell phones, for one. There was a lot of communication the old fashioned way, with pen and pencil.

TT: What year did you and Chris move here?
RR: She moved here in October 1999 and I still was teaching and coaching, so I moved here in June 2000.

Now, Chris’s parents live with us. The first year we were here, we put “relative living” on the house. Her dad was a builder back home; a carpenter, construction guy. So he designed it and built it; I said I just wanted it to look like it was part of the house. Relative living. It’s only connected on the second floor. They’re still with us; 88 and 89 years old.

They have their own entrance and garage; we did it for privacy for them, and we wanted our privacy, too. It’s awesome. It’s been great. Jessica, our oldest daughter, took her grandpa last year on one of the Honor Flights. Chris’s mom is still with us, too.

TT: What’s going on with the kids, Ron?
RR: Jessica, who is 27, is engaged to Casey Delgado, who is currently with the Binghampton, New York Mets. Jennifer, 26, is engaged to Tyler Rodgers, who is with the Triple A Sacramento Giants. His twin brother Taylor is in the big leagues, pitching for the Minnesota Twins.

Matt is into acting and currently doing stand-ins and doubles on the television series “Chicago Fire.”

TT: Is Evansville home now?
RR: Absolutely. When we moved here, we heard a thousand times Evansville was a great place to raise a family. Well, they were right.