Twenty years ago, the All Pet Emergency Clinic only was a dream of local veterinarians. They questioned why Evansville and the surrounding area didn’t have its own emergency pet clinic.

The need for such a center brought together a group of 23 local veterinarians, who gathered shareholders, held meetings, and realized their dream by opening APEC, located at 104 S. Heidelbach Ave., in 1997.

This year, APEC is celebrating its 20th anniversary. Since their opening, the clinic has doubled in size and undergone recent expansions and renovations. They have three full-time veterinarians, Dr. Sarah Henry, Dr. Michelle Hughes, and Dr. Luke Wagner. Wagner has been with the group since 1999 and collaborated with the other doctors and staff to spearhead their changes.

APEC also has doubled the number of exam rooms from three to six. There is a new quiet room with a private exit for hospitalized patients who want to visit or families who may feel emotional and don’t want to carry their pet through the clinic. The facility boasts two new surgery suites and fully digital, in-house x-rays that provide quick and efficient results.

“We really tried to design the hospital to make the client have the best possible and most comfortable experience in what sometimes is an emotionally charged situation,” says Wagner. “Achieving comfort for the client without sacrificing functionality and efficiency was our goal.”

As the only nighttime clinic in the nearby area, they take their duty to the community seriously, treating animals far and wide.

After 20 years of service to the community, they have witnessed and treated everything from famous yellow labs to 30-year-old tortoises tiny enough to fit in the palm of a hand.

“You never know what’s going to come through the door,” says Hart.

While they mostly treat cats and dogs, the staff does get a fair share of “pocket pets,” like ferrets, rats, and guinea pigs. They even recently treated a localcelebrity pup, Keep Evansville Beautiful’s yellow lab mascot EVIE. The surgery, which took place in February, was to remove a mass from EVIE’s spleen.

“It was a very stressful event,” says Hart. “Not only because she’s so well-loved in the community, but also because Mayor Lloyd Winnecke was in the lobby. You feel the pressure and think, ‘This is a big deal.’”

With the pressure, however, came great rewards. Unlike most patients, the staff was able to watch and stay updated on EVIE’s recoveries. The emergency nature of the clinic means the staff usually can’t keep up with their patients once they are out of surgery or finished with treatment. They only see the animals when they are sick or in need, but don’t get to see the effects of their hard work. 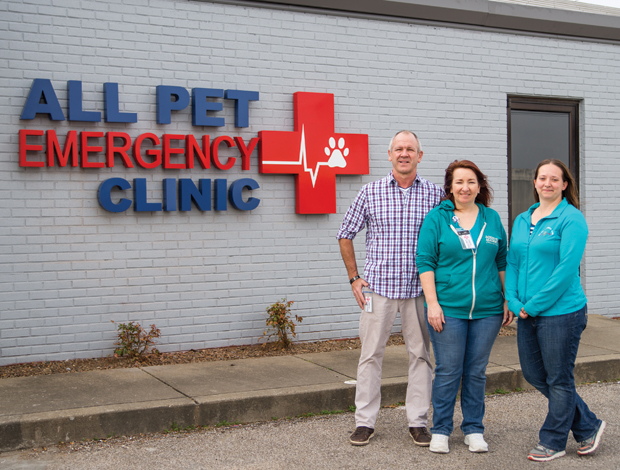 Regardless of how much progress they witness with their cases, each pet is a special and memorable experience for everyone at the clinic.

“The human-animal bond is what drives the need for our profession and where we derive our fulfillment as well,” says Wagner. “Helping an owner and their beloved pet through an illness or crisis is what we are all about. To most, their pet is part of the family. Anything we can do to make a difficult situation more bearable or comfortable is our chief concern.”

For all of the staff at APEC, their work is no easy feat from the long night hours to the stressful emergency situations they see on a regular basis.

“It’s a huge sacrifice,” says Hart, who has been with APEC since 2001. “It’s 16 Thanksgivings I’ve not been able to sit down with my family at the dinner table. It’s 16 Christmases and New Years. We want to be here to provide that service to the community.”

The sacrifice causes APEC to lose some staff members to daily pet clinics. Hart says many clients don’t understand APEC truly is an emergency clinic practicing triage. This reflects in their prices, which help pay for the ability of the staff to be there whenever they are needed.

“We do have to gauge the severity and critical nature of every case that comes in and treat the most critical,” says Toni Gillespie, APEC’s practice manager and finance director.

While loving on cute animals is part of the job, it isn’t all kisses and cuddles at an emergency clinic like APEC. Gillespie says they try to laugh and have a good time as much as possible, but they often have to buckle down and get serious in their work.

“I’m a crier. I wear my heart on my sleeve,” says Gillespie. “When I see other people cry, I’m going to cry. For me it’s when owners cry, especially kids saying bye to their pets. That’s the hardest part for me.”

Gillespie has been with the practice since 1999 starting as a veterinary assistant just two weeks after Wagner began.

“When I was pregnant, I saw an ad for the clinic,” says Gillespie. “I thought, ‘Wow, that is awesome because we totally need that in the community.’ Eighteen years later, I’m still here.”

With a young daughter at home, she never thought her part-time clinic gig would turn into a long, dedicated career.

“My intention when I started working was not to stay long because my daughter was only 2 years old,” says Gillespie. “Once I was here, I realized this is where I needed to be. I fell in love with emergency medicine, and once I was here, I didn’t want to leave.”

With so many seasoned and loyal staff members on board, APEC’s priority continues to be on the future and how they can better serve the community’s needs.

“We want to be so much more,” says Hart.

They have a dermatologist who comes from Louisville, Kentucky, to treat patients in the clinic so pet owners don’t have to make a long drive with their pets. Since the building is empty most of the day, the staff also is trying to find other veterinarians and specialists who could make use of their renovated facility and technologies to provide needed services and help to the community’s pet population.

“It is our hope we continue to grow and gradually transition into a 24-hour facility so continued care of patients is more convenient for their owners during the week,” says Wagner. “We also hope to attract specialists to the area, much like the larger municipalities of Nashville, Tennessee; Louisville, Kentucky; and Indianapolis.”

Giving back to the community and helping the animals that come through the door is what makes the work worth it says Hart. She recently helped take care of a pit bull puppy that collapsed in a yard and came to the clinic depressed. By the end of the night, he was jumping into Hart’s arms.

“It’s a passion to be here,” says Hart. “The possibility of saving that one life is worth it.”

For more information about APEC, call 812-422-3300 or visit allpetemergecnyclinic.com.