After seeing Patrick Acton’s matchstick model of Terrace Hill, the Iowa Governor’s Mansion, I was excited to learn the mansion was indeed inhabited by the governor. It also was one of the nation’s most accessible governor’s mansions, with tours offered five days a week March through December as well as dozens of special events held there each year.

I suppose I am interested in governor’s mansions. While Gov. Mitch Daniels and his wife Cheri were in residence, I had the privilege to visit the Governor’s Mansion in Indianapolis to interview Mrs. Daniels. As of late, I pass by the mansion located at 4750 N. Meridian (at the corner of 49th and Meridian streets), driving to visit my son at Butler University. It has been interesting to watch security at the Governor’s Mansion change in the time Maxwell has been at Butler.

So I was eager to see the Iowa Governor’s Mansion. The Second Empire, 18,000-square-foot home was built from 1866 to 1869 by Benjamin Franklin Allen, Iowa’s first millionaire. Its tower is 90 feet tall. 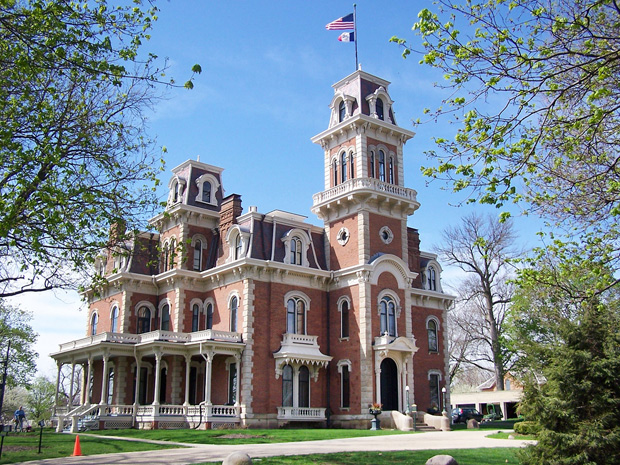 Plans were made to arrive at Terrace Hill, located just minutes from downtown Des Moines at 2300 Grand Ave., a few minutes before a tour began. Docent volunteers — ours was excellent and her school-age son was along for the experience — conduct the hour-long tour through the first two levels of the home.

The third floor is the private residence of Iowa Governor Terry Branstad and his wife Christine. Their three children grew up in the home, as Branstad is America’s longest-serving governor. Branstad was Iowa’s 39th governor from 1983 to 1999 and is now the 42nd governor, since January 2011. Soon Terrace Hill will be getting a new resident; Governor Branstad was tapped by President Donald J. Trump to serve as Ambassador to China. He will resign from the Governor’s office.

My aunt and uncle have visited Terrace Hill several times, including once for a dinner party when my uncle worked as an insurance company executive in Des Moines.

The $5 admission was a bargain for a walk through history in an incredible home.