I visited my aunt, uncle, and cousins in the fall in Des Moines, Iowa. With plenty of time to visit and no agenda — how do you reacquaint with the birth city you’ve not seen in 35 years? — my aunt and uncle took me to an Iowa treasure in the town of Gladbrook, about an hour northeast of Des Moines. It was an easy trip on the “Diagonal,” Iowa Highway 330.

Google Gladbrook (population 945) and you’ll quickly learn it is home to Matchstick Marvels and Iowa artist Patrick Acton, a former high school teacher. Acton has glued more than four million ordinary wooden matchsticks into 69 incredibly detailed scale models of renowned architecture, ships, aircraft, spacecraft, and life-like sculptures. Many models have historical significance, such as the USS Iowa battleship, the space shuttle Challenger, the Wright brothers’ Flyer, and the U.S. Capitol, which measures 12 feet long. For $5, you can see these and other Acton creations at the Matchstick Marvels Tourist Center, the tidy and tight matchstick museum that draws visitors from all over the world. 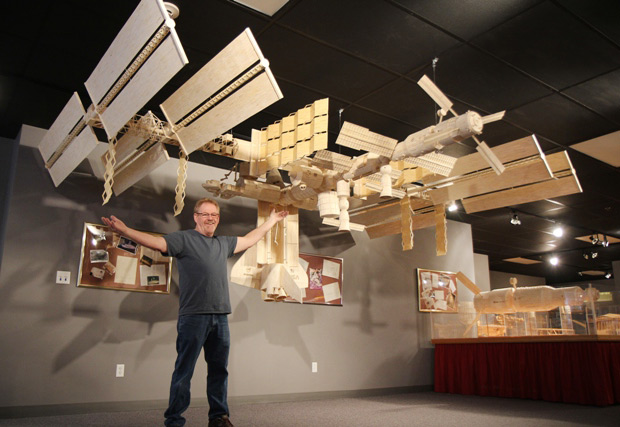 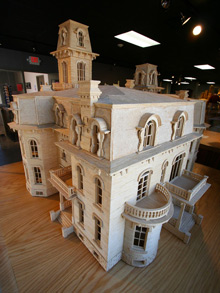 Sixteen of Acton’s sculptures on display when we visited. Ripley’s Believe It or Not Museums in North America, Australia, Asia, and Europe have purchased 20 of Acton’s matchstick sculptures.

Visitors to the museum also watch a short video documentary of Acton’s unusual hobby and see a display of the drawings, plans, tools, and equipment he uses.

An unfamiliar but clearly very grand Victorian building — a home, recalling for me, the Reitz Home — stood out from the rest of Acton’s structures. My aunt noted my fascination and explained it was Terrace Hill, the Iowa Governor’s Mansion located near downtown Des Moines. Tours are offered. Would I like to go?

Absolutely! And, with plenty of time, we made plans to visit Terrace Hill the next morning.  I will write about the Iowa Governor’s Mansion in my next post.