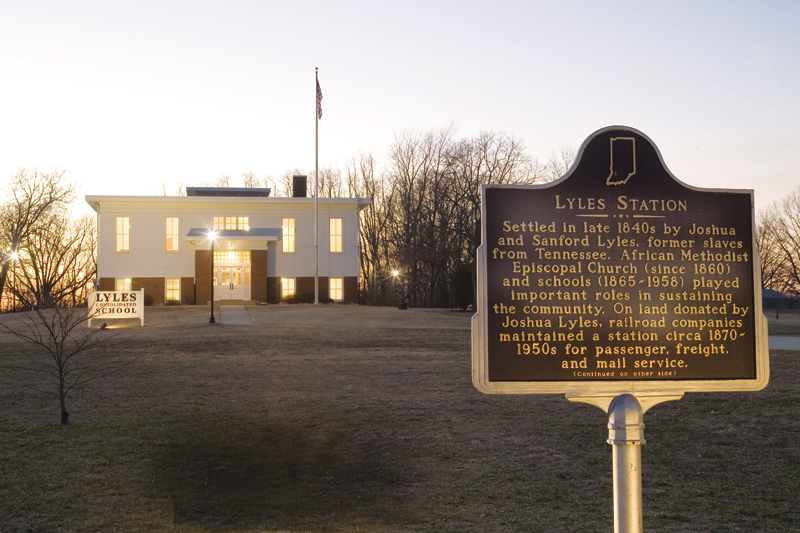 The story of Lyles Station, located near Princeton, Ind., began when Joshua and Sanford Lyles — brothers and freed Tennessee slaves — purchased land in Southwest Indiana in the late 1850s. When the Civil War ended, Joshua, who had become a successful farmer, rallied family and friends to head north and join him.

In 1886, the thriving settlement was named Lyles Station in his honor. At its peak near the turn of the century, the town boasted 800 residents, a railroad station, a post office, general stores, a lumber mill, a successful farming industry, and a school.

A tragic 1913 flood left much of Lyles Station in ruins, and many families fled the area. Few aspects of the settlement survived, but to protect its legacy, the nonprofit Lyles Station Historic Preservation Corporation formed in 1996. Three years later, the Historic Landmarks Foundation of Indiana (now Indiana Landmarks) named the 1919-built Lyles Consolidated School one of the state’s 10 most endangered places. After a renovation, the school reopened in 2003 as a museum and local history center — fitting for a community that deeply valued education.

Another joyful yet reflective occasion is the upcoming Juneteenth, celebrated around the nation. “We know the importance of freedom,” Madison says, “and how we struggled to get to that point.” Lyles Station’s public celebration includes a barbecue lunch, walking tours, and a guest speaker.

During June, July, and August, the historic site at Lyles Station (off Indiana State Road 64 near Princeton, Ind.) is open 1-4 p.m. Tuesdays, Thursdays, and Saturdays or by appointment. For driving directions and more information about Lyles Station, visit www.lylesstation.org. To learn more about the Juneteenth celebration, see our Guide.