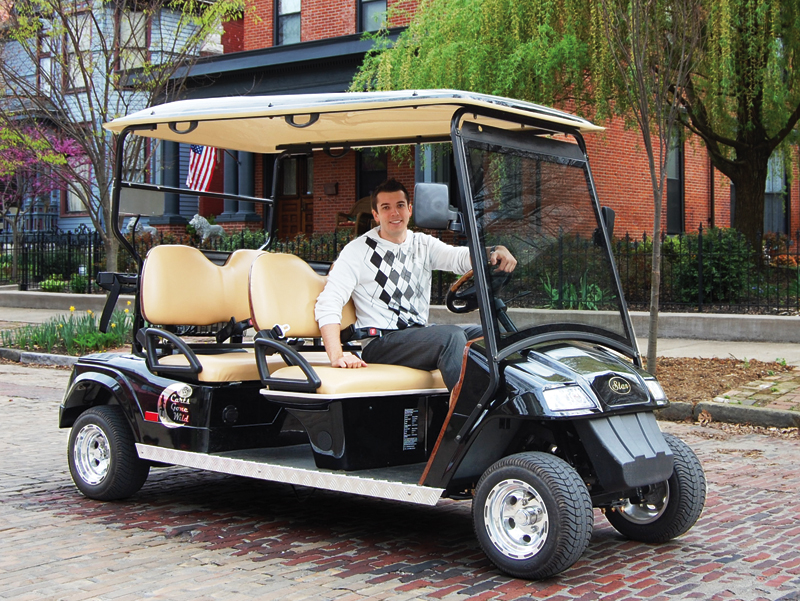 That guy in the picture? That’s me. I normally don’t look so cool, but the vehicle I’m driving makes anyone instantly more fun.

The Scoop
For five days in April, Evansville Living borrowed an electric low speed vehicle (LSV) from Carts Gone Wild, but despite what it looks like in the photo, an LSV isn’t a golf cart. An LSV must reach speeds between 20 and 25 mph and is equipped with headlights, turn signals, an automotive windshield, and more.

I’m a Downtown dweller and live only two blocks from work. I never have minded the walk, but with an LSV, I looked forward to my 30-second commute. When I cruised to my girlfriend’s office for a lunchtime date, her eyes lit up at my unexpected choice of vehicle.

The LSV didn’t just impress the opposite sex. Todd Tucker, president of Tucker Publishing Group, used the LSV for three days and also saw enthusiasm from adults and children for his borrowed wheels. He picked up his sons, Maxwell and Jackson, from grade school on a Friday afternoon and received much admiration from students. Tucker’s friends begged for rides in the LSV, too, and several trips to Sonic were in order. With a casserole in tow, the Tuckers headed from their East Side home into Newburgh for an Easter celebration at Todd’s parents’ house.

The Verdict
I was limited with the LSV. The electric vehicle needs to be recharged at night by simply plugging it into an outlet. My second-floor apartment wasn’t the ideal location for such an issue, and I kept it overnight in a friend’s garage. The Tuckers didn’t have the same problem and discovered — like I did — that having an LSV makes you instantly more popular.

More importantly, it’s practical. If I owned an LSV and a Downtown home, I’m not sure I’d ever drive my car in the spring, summer, or fall, unless it rained. Residing on the East Side, the Tuckers felt there were no distance limitations, and after three days, they could see the savings at the gas pump.

Need to Know
LSVs only can travel on roads with speed limits of 35 mph or less and can cross major highways. LSV drivers have the same legal requirements as other motorists on the road. They need a driver’s license, vehicle insurance, and a registration. A current federal tax credit of up to 10 percent of the cost of any LSV up to $2,500 is available until the end of 2011. For more information, contact Carts Gone Wild at (812) 632-8514 or visit www.cartsgonewild.com.