A Modern and Historic Utopia

On Oct. 10, 1979, hundreds gathered on the grounds of the brand new Atheneum in New Harmony, Indiana. In attendance were architect Richard Meier, Lt. Governor Robert D. Orr, and visitors from as far away as Asia. Nearly five years after the project commenced, the completion of this grand white building was a symbol of New Harmony’s past, present, and future.

The project began with Jane Blaffer Owen, wife of Robert Owen’s descendant Kenneth Dale Owen. Jane was spending personal funds to preserve and grow the town of New Harmony but wanted to establish a group to continue these efforts. She invited Ralph G. Schwarz to head Historic New Harmony, Inc. Together, they continued to shape New Harmony into a modern and historic utopia. They wanted a building that would serve as a welcome center and encapsulate the spirit of New Harmony’s persistent innovation and advancement into the future, so they commissioned Richard Meier and Partners Architects LLP to create this vision. 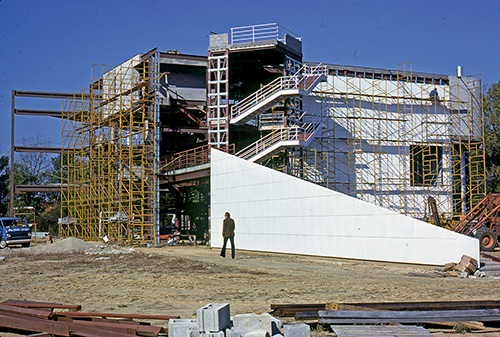 The Atheneum was a breakthrough in Richard Meier’s career. This building was the first of the firm’s iconic white-walled museums and the design was later used at the High Museum of Art in Atlanta, the Getty Center in Los Angeles, and the Barcelona Museum of Contemporary Art in Spain. The Atheneum has received numerous design awards, including the Progressive Architecture Award for 1979, the American Institute of Architects Award in 1982, and the Twenty-Five Year Award in 2008.

In celebration of the Atheneum’s 40th anniversary, Historic New Harmony is hosting numerous events, including a speaker series featuring local role models and leaders in the fields of architecture, art, and historic preservation on Oct. 10-11 and a fundraising gala and afterparty on Oct. 12. Visit usi.edu/atheneum40 for a full schedule of events.