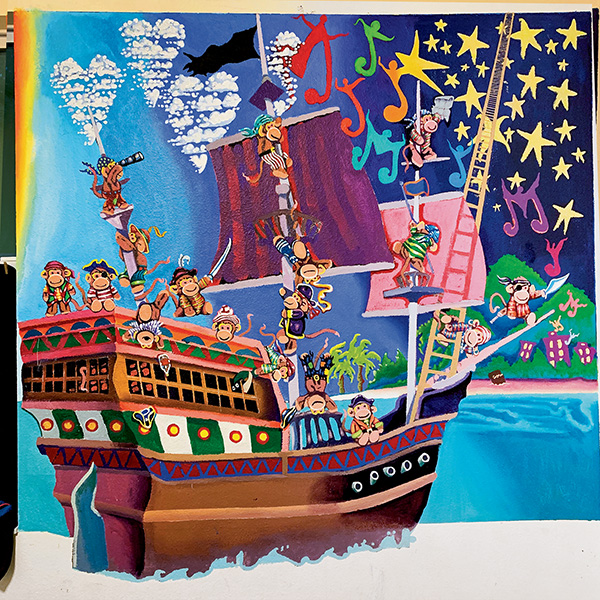 A pirate ship full of monkeys was not a typical subject Dennis Deusner was used to painting, but it would be the perfect centerpiece for a mural in the bedroom of his youngest grandchild, Luka.

“My daughter Elissa and her partner Michelle were very specific on the theme — they wanted a pirate ship with monkeys,” he says with a laugh. “So I put that together.”

A lifelong painter, Deusner began to plan out his piece and immediately thought of a memory from his childhood: Mesker Park Zoo’s monkey boat. He began to research, finding photos to draw out his sketch and make adjustments to fit his mural. Next came the monkeys.

“A lot of people gifted Luka stuffed monkeys for his birth, and I looked at them and thought I could use one of those, particularly the one the girls liked the most,” he says. 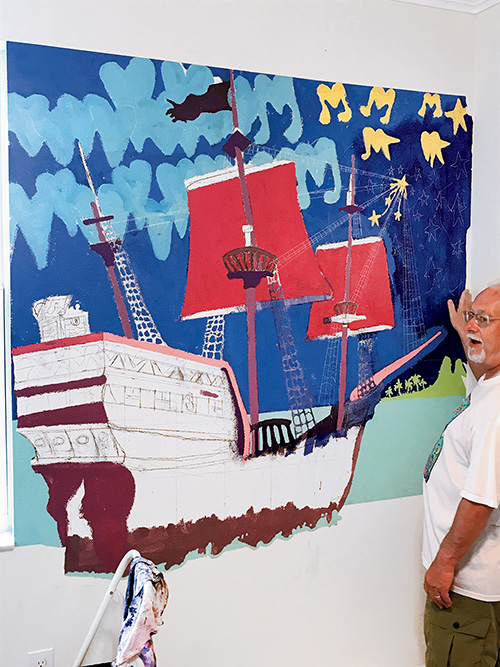 Deusner had his daughter (who lives in St. Petersburg, Florida) pose the monkey in various ways and send him pictures to base his drawing on. From there, he dressed the monkeys as pirates, complete with coats, hats, and swords.

Another meaningful addition to the mural was a ladder leading up from the boat into stars, musical notes, and clouds.

“I always loved the Bob Dylan song ‘Forever Young,’” explains Deusner. “And he talks in the song about ‘May you build a ladder to the stars and climb on every rung. May your heart always be joyful, may your song always be sung, may you stay forever young.’ And I used that.”

The mural — which is about 5 by 6 feet — was done in acrylic paint and took around 65 hours to complete. Though it was out of his comfort zone, Deusner says he’s happy with how the mural turned out and enjoyed the challenge.

“I’m very proud of it,” he says. “It was enjoyable. The most fun was having around 20 unclothed monkeys that I just started going around putting clothes on.”

“He’s done murals and paintings for all of his grandkids,” says Elissa. “And all of them have been truly special and deep with meaning and emotion.”