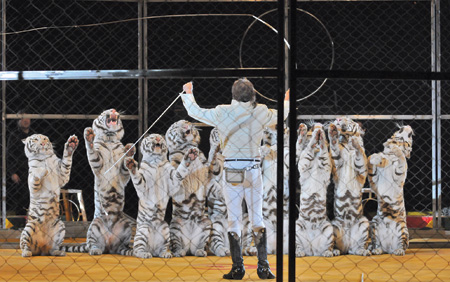 Somewhere in the middle of the 2011 summer, Mayor Jonathan Weinzapfel hosted a media tour at the new arena under construction. Reporters gathered with cameras, digital recorders, and notepads. He pointed to features worth noting such as the 20-foot ceiling that is near the arena’s entrance that is large enough, Weinzapfel said, for the circus elephants to comfortably walk under.

One reporter was surprised because he had heard a rumor, after all, that the elephants couldn’t fit inside the facility. Weinzapfel, who has taken criticism for his support of the project (often from anonymous posters on media websites), looked perturbed. He composed himself and responded, “Yes, the elephants can fit in the new arena.”

That’s good news to Brian Ball, the public relations chair for the Hadi Shrine Circus. The Shriners’ plan is to bring a lineup of bears, tigers, and (yes!) elephants. Those acts are a major part of the 78-year history of the Hadi Shrine Circus, which has produced 1,000 performances for more than 3 million people, and Ball expects the 2011 crowd to be one of the biggest ever. The evidence for such a claim? When the circus debuted at Roberts Stadium after a run in the Soldiers and Sailors Memorial Coliseum, a record crowd turned out for the regular November event.

The Unexpected
“There are other shrines out there who hire a canned circus. It’s already put together,” Ball says. “We hire each individual act, and some of those aren’t finalized until a couple of weeks before the circus.”

The Expected
“I do know the elephants, bears, and tigers will be there,” he says. “For sure.”

The Planning
Planning begins when the circus’s light rigging comes down. “We want to put the heart and soul of the Hadi Shriners into this spectacle,” Ball says, “because we now have third and fourth generation families coming.”

The Commitment
Each show has 200 circus performers. Behind the scenes are nearly 300 Hadi Shrine volunteers.

The Surprises
Last year, a rumor persisted that the elephants would walk down Main Street. “That day, we had freezing rain,” Ball says. “One thing that elephants — and people — don’t like is freezing rain.” The Ford Center is on Main Street, but Ball isn’t committing to an elephant parade yet. “Because we are moving into a new arena,” he says, “there are going to be some great surprises.”