The Lion, the Frenchman, and the Museum 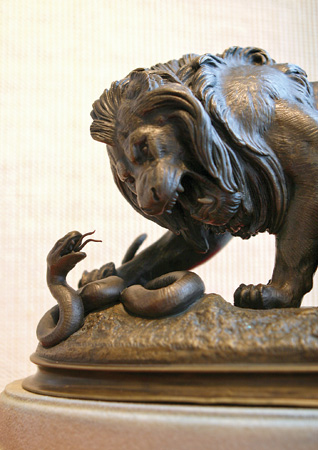 In a naturally lit alcove, on the second floor of the Evansville Museum of Arts, History, and Science, are a group of wild animals forever caught in natural poses — biting at an itch, violently killing, and devouring prey.

The artist Antoine-Louis Barye was a goldsmith’s son who received little formal education. But after serving in the French army during the Napoleonic wars, he studied art. In 1823, he worked for the court goldsmith, at which time he developed an interest specifically in sculpture. Intrigued by the anatomy and behavior of animals, he spent countless hours studying them at the Paris Zoo in Paris, France.

Barye created his bronze sculptures, which will be on display at the Evansville museum through December 31, with the lost-wax casting method developed in the 5th century by the Greeks. In this process, plaster or clay is shaped in the form of the final sculpture; it’s surrounded by wax of the same thickness as the bronze to come. Hollow wax rods are affixed to the figure as drainpipes, and then the figure is covered with an outer plaster coating and heated. The wax melts and runs out; molten bronze is poured in. When the bronze hardens, the outer cover is removed and the drainpipes are broken off. The interior core of plaster is broken and removed. Only the bronze form — polished and burnished — remains.

Barye was the first and quite possibly the best sculptor of the French Animaliers, sculptors who considered animals worthy of artistic prominence. It’s hard to imagine in our world where pets have been promoted to family status, but in Barye’s day, it was unimaginable for animals to be the subject of art, and the artists who thought otherwise were looked down on.

The financially unsuccessful Barye was forced into bankruptcy in 1848. His plasters, models, and rights to produce them were sold to pay his debts. The next few years were difficult, but by 1857, he was nearly debt free and had regained control of his casts and models. He received many commissions and finally received recognition. Today, most of Barye’s plasters and models can be found at the Louvre in Paris, France.

The collection in Evansville is on loan from a local private collection and includes seven of his highly detailed sculptures.