I had reconciled with the idea that somehow, contrary to my family lineage that my ethnicity background is 25 percent Norwegian (an idea integrated into my upbringing), I actually was only 10

percent Norwegian and was very Irish — 25 percent. Like you, I got 50 percent of my DNA from my father and 50 percent from my mother. Both of my parents have Irish in their heritage (my middle name, Kathleen, comes from my mother’s Irish cousin).

DNA selection is random; I figured the Irish had stacked the decks for me and the DNA I grabbed from my parents was heavily Irish. After all, I was born with light blonde-red hair that has become very wavy as I age and, following the stereotypes, I can exhibit a temper. Like the fellow on the Ancestry DNA commercial who traded his lederhosen for kilts, should I begin eating rashers instead of lutefisk? (I’ve eaten lutefisk only once and rashers — Irish bacon — as often as I can get by with it.)

Ancestry DNA, the company I tested with, clearly explains that though DNA doesn’t change, DNA science does. As a result, ethnicity estimates can be refined or changed. Several months ago I logged into my account and saw where my ethnicity estimate had been revised. Lo and behold, I am 25 percent Norwegian — not 24 percent; not 26 percent — exactly one-quarter Norwegian. 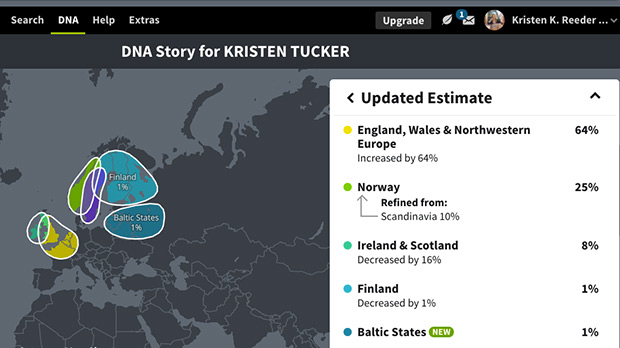 Also befuddling to me as I worked through my ancestry was my father’s heritage. Though I knew virtually nothing when I began, I quickly discovered most of my paternal side was very English, arriving early to America — in 1620 actually, on the Mayflower. But my ethnicity estimate didn’t back this up — indicating less than 1 percent of my DNA was from Great Britain.

The revised estimate puts me at 64 percent England, Wales, and Northern Europe — a pretty big territory on the Ancestry map. Ancestry DNA does recognize France and Germanic Europe as distinct regions making it not likely that my father’s family was “Pennsylvania Dutch” (German?) as my Granny like to say. Of course, she also told us she was Native American!