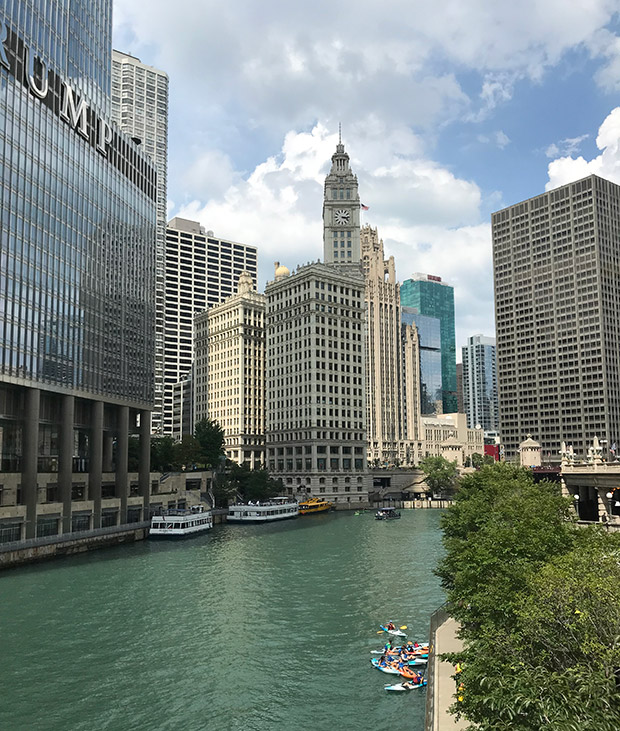 A few months ago I drove my 17-year-old son and his friend to Chicago for Lollapalooza, the huge music festival held each year in Grant Park. While they met up with their friends (and their parents) for the first afternoon of the festival, I had other plans. Within a couple hours of arriving in Chicago, I boarded a Wendella boat for the Chicago’s Original Architecture Tour® — one of my favorite Chicago activities.

The tour navigates all three branches of the Chicago River. The experienced and humorous guide tells the history of the buildings along the waterway and the architects and firms who designed and built them. Here, I’ll share some highlights:

Wendella’s tours depart from the Chicago River right under the Wrigley building, next to the Trump Tower. Note the clock on the tower: Its four faces (pointing each direction) are 19 feet 7 inches in diameter.

▲ The 1920 Wrigley Building is located directly across Michigan Avenue from the Tribune Tower and next to the fourth tallest building in the U.S., the Trump Tower.

Currently rising along the south bank of the Chicago River’s main branch, the 1,198-foot Vista Tower is posed to become the city’s third tallest building, after the Willis Tower and the Trump Tower. (It’s completion will push the AON Center, formerly known as the Standard Oil building and the Amoco Building, to fourth tallest in the city). When it opens in 2020 it will house 406 luxury condos, a 192-room five-star hotel, and lots of fancy amenities. 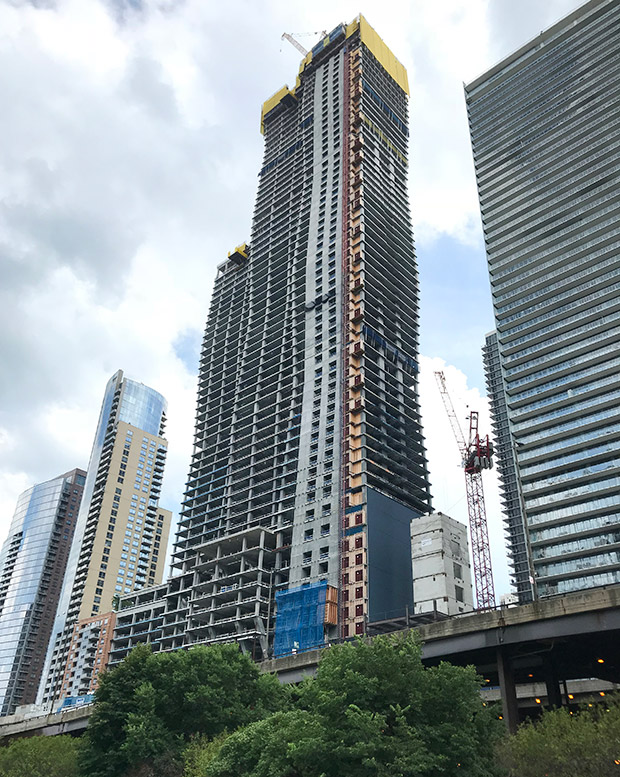 Lake Point Tower is the only major private structure on the lakefront side of Lake Shore Drive and likely to remain that way for the foreseeable future, given the city’s prohibition on building on the lakefront. 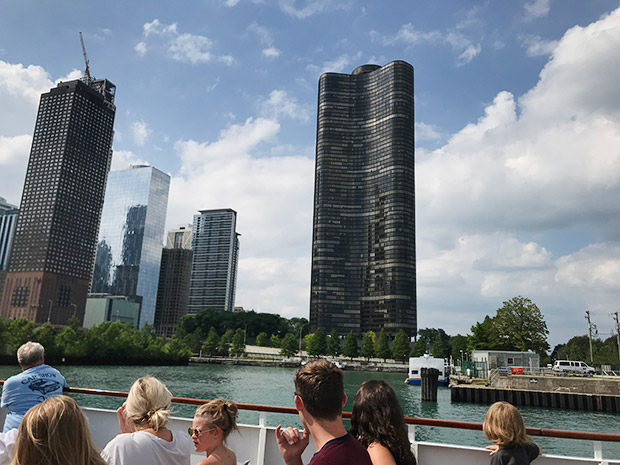 Designed by Bertrand Goldberg and completed in 1964, Marina City was the original city-within-a-city development. The twin towers’ iconic corncob shape has appeared on classic airline posters and is the cover art for Wilco’s Yankee Hotel Foxtrot. 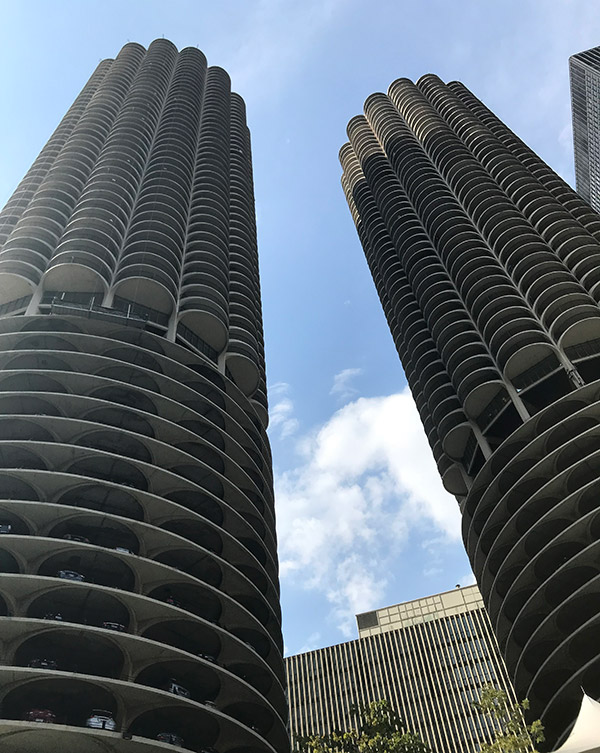 River City is a mixed building also designed by Bertrand Goldberg, to whose Marina City it bears clear affinities. It was completed in 1986. 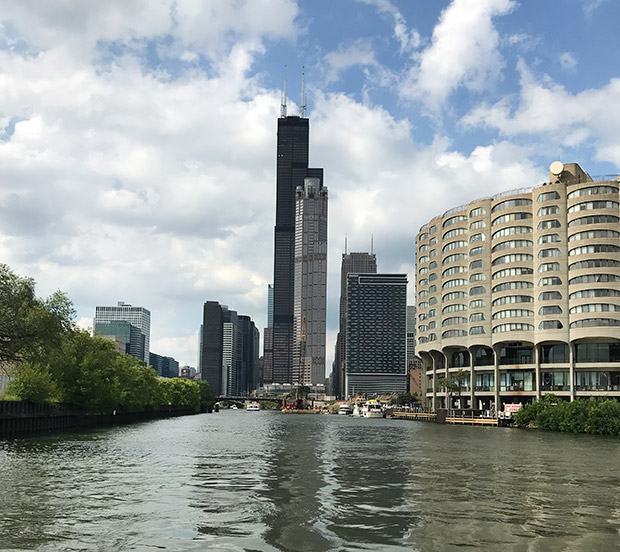 ▲ River City, a Bertrand Goldberg-designed condo building with the Willis Tower in the background

The Montgomery Ward Company Complex is the former national headquarters of the oldest mail order firm in the U.S. The 400,000-square-foot property is located along the North Branch of the Chicago River and occupies 7 acres. Today the building serves as condominiums and also is home to restaurants, the Big Ten Network, Groupon, and Dyson. 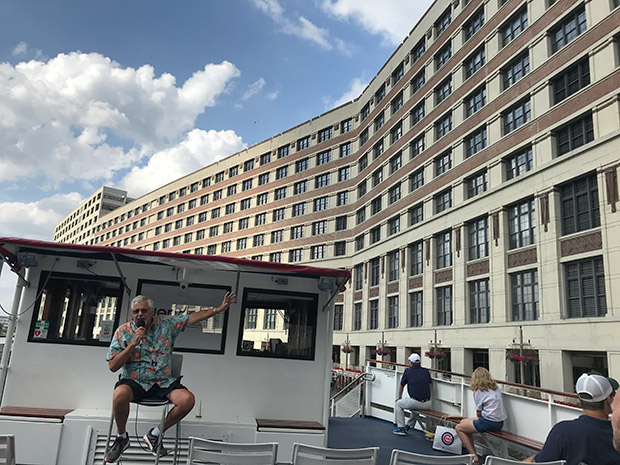 When it was completed in 1930, the Merchandise Mart was the biggest building in the world in terms of total area. The 4,000,000-square-foot building located at the junction of the Chicago River’s branches has its own zip code and hosts 20,000 visitors and tenants each day. 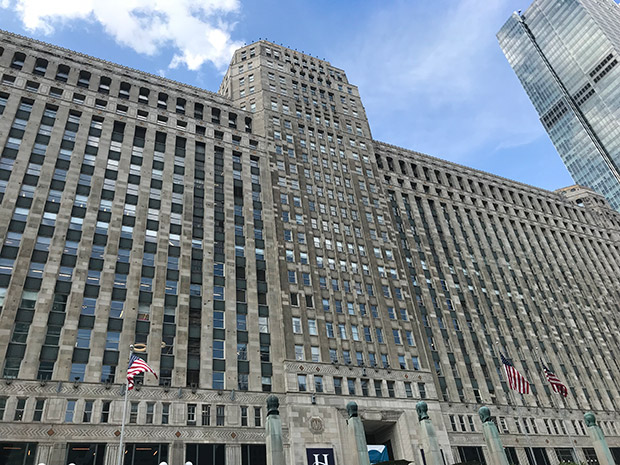