A Trip for Birds

At the front door to Old Mexico in the “Texas Tropics,” McAllen, Texas, is a spicy blend of two cultures and two languages.

My trip, in December, was tourism focused — and what brings tourism to Hidalgo County, and the neighboring counties throughout the Rio Grande Valley, is birds.

Home to the World Birding Center, a network of nine birding parks throughout the valley (which is not a valley, and the Rio Grande, which flows from south central Colorado to the Gulf of Mexico, is not a voluminous river; it is narrow and shallow with dramatic bends), the area is the No. 1 birding destination in North America.

Among those who aren’t “bird nerds,” the border — the Rio Grande separates South Texas from Mexico — is better known for illegal human migration than for bird migration. Many of the birding parks are along the river; at Bentsen State Park, its two-story Hawk’s tower affords a peek into Mexico. While I did see Border Patrol vehicles, the group I was with saw no illegal crossings and locals say the border problems are not something they see or experience in daily life. Birding near the river, my iPhone did think I was trying to roam internationally. The city of Reynosa, Mexico, (population 672,183) is just across the river.

There are 39 species on the American Birding Association list that can be found only in the Rio Grande Valley. We wasted no time checking off the birds on the list — like the Green Jay — an exotic that also is the official bird of McAllen.

The World Birding Center is a network of nine distinctly different birding sites set along a 120-mile historic river road — each sponsored by one of the valley’s nine partner communities. It’s a $20 million development by the joint partnership between Texas Parks and Wildlife Service, Rio Grande Valley Communications, and U.S. Fish and Wildlife Service. I visited bird parks in and around McAllen. The first was an oasis in the middle of the city, just a stone’s throw from hotels and the interstate.

Quinta Mazatlan is a historic Spanish Revival adobe hacienda surrounded by lush tropical landscaping and native woodland. Its quiet trails wind through 15 acres of birding habitat. Quinta Mazatlan also is a conference and events center. Nearly every day a Quinceanera photo session is booked at the estate. In fact McAllen is a leading shopping destination for beautiful Quinceanera dresses. (Quinceanera is the celebration in parts of Latin America of a girl’s 15th birthday.)

Other bird parks we visited, all part of the World Birding Center, were the Bentsen-Rio Grande Valley State Park and Estero Llano Grande in nearby Weslaco. At each, enthusiastic birders checked off birds on their lists.

For visitors who think birding is, well, for the birds, McAllen is replete with shopping, a bourgeoning arts and historic district, and dining that ranges from authentic Tex-Mex to progressive New American eateries.

Nancy M. Millar, vice president and director of McAllen Convention and Visitors’ Bureau, says, “McAllen’s a very lively place. We have lots of visitors from Mexico, Winter Texans from the Midwest, nature enthusiasts from all over the world, and other visitors as well, and of course the locals. We’re constantly having arts events, sporting events, music events, and various other activities. This diversity of people and their interests gives McAllen a special vibe that’s just full of fun and activity.”

South Texas and Northeastern Mexico’s borderland past is explored in the premier exhibition, “Rio Grande Legacy,” at the Museum of South Texas History in nearby Edinburg.

Shan Rankin, director of the Museum of South Texas History, says, “A former museum archivist once called our region the ‘last frontier’ for historians. So much of our history, so many of our stories, are largely untold — and that means a lot of opportunity to do original research and tell original stories. At MOSTHistory, we are connecting our visitors with those stories, helping them to discover new and different information. I love going through the museum with someone and hearing them say, ‘I never knew that!”

At the International Museum of Art and Science, a Smithsonian Affiliate in McAllen, view  “Sacred Visions: Stained Glass Windows form the Louis Comfort Tiffany Studios” featuring 20 ecclesiastic scenes; check out “Science on a Sphere,” an exhibit designed by NASA and the NOAA to illustrate planetary and celestial systems with stunning images form the Hubble Space Telescope, orbital satellites, and space probes on a three-dimensional, 6-foot wide sphere.

I enjoyed every meal in McAllen. The city is home to the first Delia’s Tamales, which opened in 1998. Try them and you’ll never again buy frozen tamales from the grocery — Delia’s ships nationwide. At Spork, we sampled “new American” cuisine, including Chef Adam Cavazos’ delicious braised pork shank.

At SALT — New American Table located in the McAllen Arts District, cultural cuisine meets regional sourcing. Diners may choose to sit alongside the exhibition kitchen and watch the chefs prepare meals. Servers present a knife box from which patrons choose their own steak knife.

The first authentic Brazilian steakhouse (or Churrascaria) in the U.S., Rodizio Grill, was established in McAllen in 1995. Arrive hungry: you’ll be treated to a parade of gauchos holding 3-foot skewers of meat grilled over an open fire and carved tableside. Vegans can make more than a meal from the salad bar with an abundance of authentic Brazilian salads and side dishes — probably the most tempting salad bar I ever have seen.

South Texans and Mexican nationals call a day trip to McAllen, “McAllening.” Texas is a large state with so many tourist destinations; however, I encourage you to look at South Texas and consider a bit of  “McAllening.” 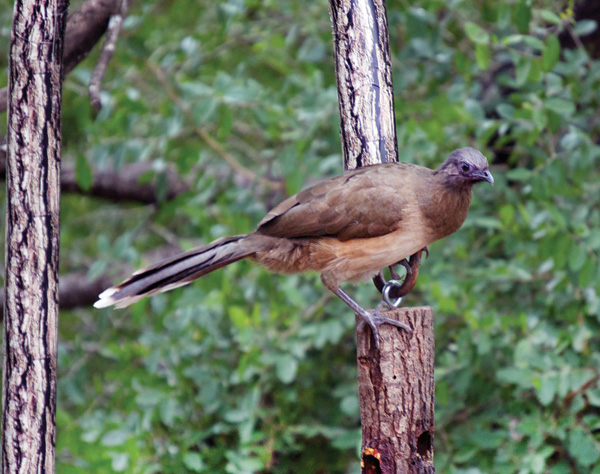 If you think birding is an obscure pastime, think again. For at least five years, it’s been reported in the media that birding is America’s second fastest growing hobby. (Genealogy claims the top spot.)

•  Birding as a hobby first took off in America with the publication in 1934 of Roger Tory Peterson’s, “A Field Guide to Birds.” The guide provided a system for identifying key markings of bird species. After World War II, binoculars became more available to the average American, and the popularity of birding continued to increase.

•  In January 2014, National Public Radio and USA Today both reported the birding news story of the year: the setting of a new “Big Year” record of 750 species sighted in North America in 2013 by Neil Hayward, breaking the old record of 748 set by Sandy Komito in 1998.

•  Avid bird watchers strive to see as many different species as possible in a lifetime, a year, a season, or a single day.