And All That Calf 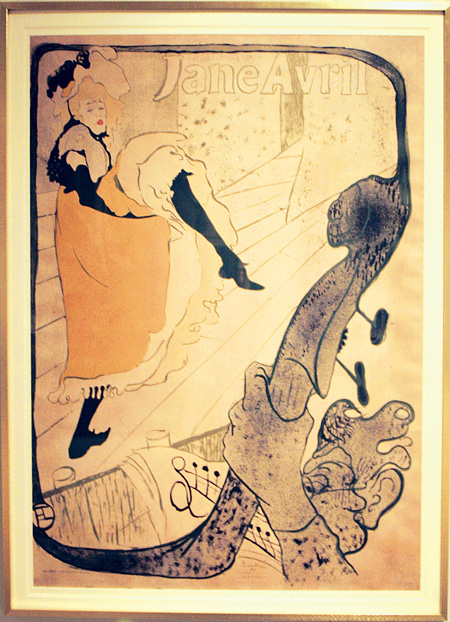 In the Lithograph displayed on the second floor of the Evansville Museum of Arts, History and Science is Jane Avril’s bent leg. She has it thrust upward, ready for a kick, but in the still of this piece, her leg dangles with her big dress high enough to reveal a striking amount of calf. In the late 19th century, the result was scandalous and revealed the seedy Parisian nightlife.

The artist, Henri de Toulouse-Lautrec, created hundreds of these advertisements to promote Jane Avril’s Moulin Rouge shows. He was a master of lithography, a process using a grease-based crayon, pencil, or liquid on Bavarian limestone. Lithographers then placed paper over the stone to create copies. Toulouse-Lautrec’s lithography made ladies of the night celebrities. He often became friends with the performers and prostitutes. Those affiliations later landed him with a misogynist tag in the 1990s, but today, Mary Bower, the Evansville Museum’s curator of collections, dismisses that notion. “There have been lots of things through the years people have said about Lautrec,” Bower says. “He was such a colorful personality. It was such a risqué time, so lots of oral history has come up about his life.”

As colorful as Lautrec may have been, bright hues are absent in this permanent piece, donated by Edward and Ruth Weiss when the museum first opened in the late 1950s. Not to say that lack of color was his norm. Japanese wood-block prints influenced Lautrec. That art form was popular in France during Lautrec’s life, and those pieces often demonstrate three dimensions on a flat plane. In late August, the museum debuted an exhibition of contemporary Japanese bamboo baskets, and adorning the walls are Japanese wood-block prints — just around the corner from Lautrec’s work. The comparison of art is unavoidable, and visitors can see the basket exhibition through November.

They can see Lautrec’s piece year round. It gives a vantage of Avril from the orchestra pit. At the bottom of the lithograph, a hand jets up and grasps a cello. In front of the musician is sheet music, and beyond that is Avril on stage. Lautrec used large blocks of color to emphasize Avril. Her leg darkened against variations of cream and yellow is the focal point.

Beyond that leg is her face, which is square and manly. Compared to a rare photograph of Avril, Lautrec may have missed the mark. But when Avril shows that much calf, does she really need a cute face?