At Home in Garden 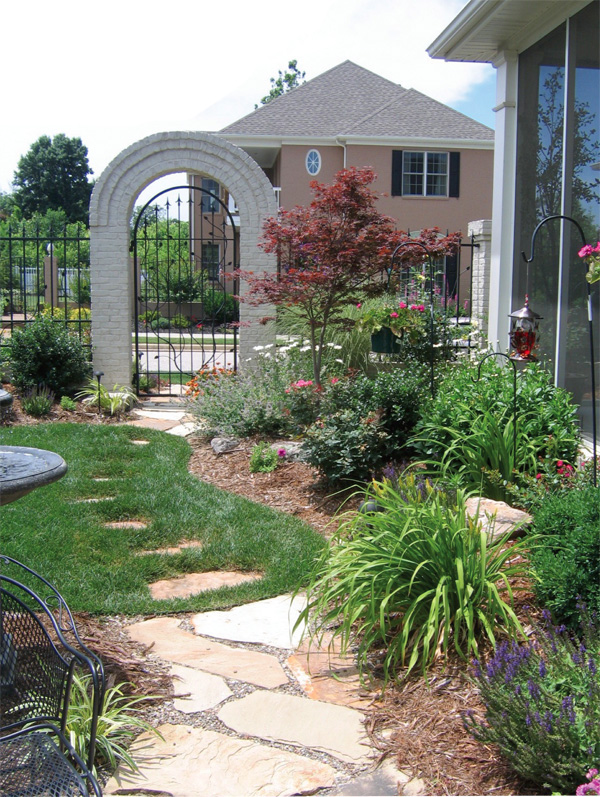 When Jeff and Pat Swan relocated to Evansville four years ago from their longtime home in Baton Rouge, La., their home furnishings weren’t the only things packed up and moved. Much of what was rooted in their backyard came, too. Into a large moving van went fig trees, magnolias, elephant ears, antique sugar-cane kettles, an heirloom rose bush from coastal Louisiana, and a wide variety of perennials that thrive in the hot and humid seasons of the South.

The Swans have adapted well to their Indiana home in part because their plants have, too. “I’ll always be a Southerner at heart,” says Pat, explaining why she transported her backyard garden with her. “We may live here forever, but I’ll never not be a Southerner.”

It’s a sentiment that offers insight into why the Swans’ backyard has been dubbed a “Southerner’s Indiana Garden” and will be featured in this year’s Southwestern Indiana Master Gardener Association’s Garden Walk. The June 13-14 event, with its theme of “Nature’s Kaleidoscope,” offers a glimpse of 11 of the city’s most fascinating private gardens. What’s even more appealing is that the garden tour will be hosted by “master gardeners” like Pat Swan, university-trained volunteers who serve as community educators to provide science-based information on horticulture and environmentally sound gardening practices.

For Swan, earning that title meant spending time at the Burden Center in Baton Rouge; it was a 440-acre plantation that was donated to Louisiana State University for horticultural research. “I drove the tractors and ran the plant sales,” says Swan, whose retirement from a career in banking freed her to pursue her true passion.

It’s a passion made plain in the stories she tells about the abundant collection of plants found on her half-acre yard. Among her beloved possessions is her “Peggy Martin Rose” bush, named for a friend from New Orleans who was an avid rosarian and lost both her home and her parents to Hurricane Katrina four years ago. When Martin returned to the family homestead after floodwaters receded, all of her prized rose bushes had been destroyed, but a new one had appeared – a vigorous climbing heirloom rose with brilliant color. Swan was among the first group of people to get a cutting from the rose bush. “It’s just exquisite,” she says.[pagebreak]

Though she brought her Southern plants with her, Swan did have to learn how to garden in a new way after moving north. During her first year here, someone asked her when she planned to lift bulbs out of her garden. “I had to ask what that meant,” Swan recalls. “A Southerner doesn’t know what it means to dig up bulbs and put them away for the winter. We just leave them in the ground year-round.”

Most of her transplanted plants have done well and those she worries about, she keeps in a small greenhouse that she and her husband built from a structure that had housed a hot tub on the property they bought when they moved here. Among its occupants are large ferns native to tropical climates that she sets out in shady areas when the weather warms. “I’ve not lost anything that I really cared about,” says Swan.

She’s eager to talk about her gardening adventures with tour patrons –– “When you’re from the South, you don’t know any strangers,” she says –– and her fellow master-gardener hosts are as well.

The tour kicks off on both days at the Southwestern Indiana Master Gardener Display Gardens, located near the Eykamp Scout Center (3501 E. Lloyd Expressway). As Lynda Heines, chairwoman of the Garden Walk, notes, “It’s a great starting place.” The variety of gardens that have been created by the local organization include a rock garden, a berry patch, an herb bed, and a rain garden. “They truly set the tone for a day of experiencing Nature’s Kaleidoscope,” says Heines.

The private gardens on the tour range from a rambling country garden on 21 acres on the North Side that includes a fruit grove and bluebird nesting boxes to a small courtyard garden in Sutherland Estates on the East Side chock full of peonies, bougainvillea, daylilies, and daisies.

A list of all the gardens and directions to each are included in a guide distributed with the purchase of tickets to the Garden Walk. Garden-related items, including seed and plant catalogs, Organic Gardening, Fine Gardening, Garden Gate, and Evansville Living magazines, as well as seeds, bird seeds, and garden tool catalogs will be given away while supplies last. Proceeds from the event go to help fund scholarships awarded to Purdue University and Ivy Tech Community College students majoring in horticulture or a related field.