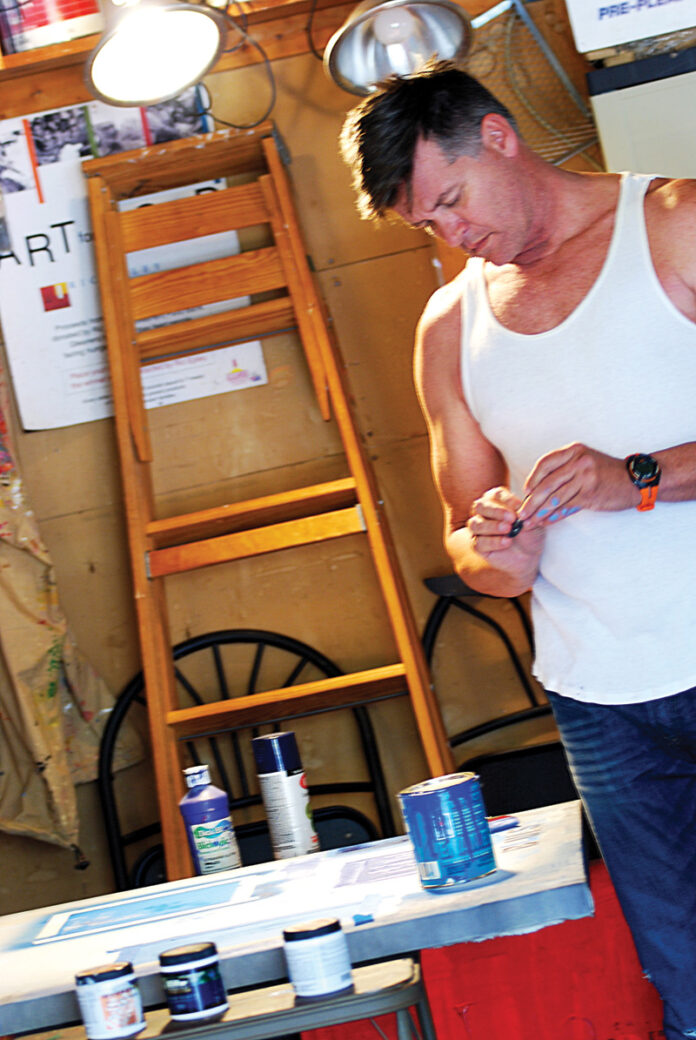 Artist Ric Epley, 53, describes his upbringing as “dichotomous.” At home on Governor Street in Evansville, he was a tough city kid, but at his grandfather’s farm in Beech Creek, Ky., where he spent lots of time, he was “just like Opie Taylor.”

After graduating from Harrison High School and achieving a bachelor’s degree in psychology from the University of Southern Indiana, Epley moved to Denver for law school but never began classes. His plans changed when he accompanied friends to a modeling shoot and was asked to fill in for a model. Soon he was immersed in a world of art and relocated to Paris as a working model.

The urge to paint didn’t strike Epley until he returned home. Following a few more modeling gigs, jobs with insurance and advertising companies, and a stint mowing lawns, Epley, who now lives in Newburgh, Ind., found himself bothered by the fact that his house lacked decor. On impulse, he bought a canvas and paint from arts and crafts store Michaels, and with no formal training, he began to make brush strokes. “I learned to paint basically out of necessity because I didn’t have anything on my walls,” he says.

Epley produced about 20 pieces of art the first year he painted. Shortly after joining a studio, he had a dual art show with a friend. Together, they sold every painting. Epley, a father of two, distinctly remembers his children turning to him and exclaiming, “People like this!” Today, Epley’s clients include individuals and companies in Evansville, Indianapolis, Nashville, Tenn., and California — due largely, he says, to the relationships he built through the multimedia company he founded called Fusion New Media.

His abstract paintings may appear simple on canvas, yet “they seem to have an emotion attached to them,” says Epley. A painting from his Blues Series, on display at Lorenzo’s Bistro and Bakery through the end of December, he “bled on, cried on, and actually set on fire.”

The seven-piece series, inspired by Epley’s love of blues music (especially local guitarist Tommy Stillwell), includes pieces in bold shades of azure, some with dramatic bursts of red, black, or white. One painting features an electric guitar — rare for Epley, as he does not often venture out of the realm of abstract.

“I’m not trying to be a provocateur,” Epley says. “I’m humble and grateful there’s some outlet I enjoy doing that people seem to like.”