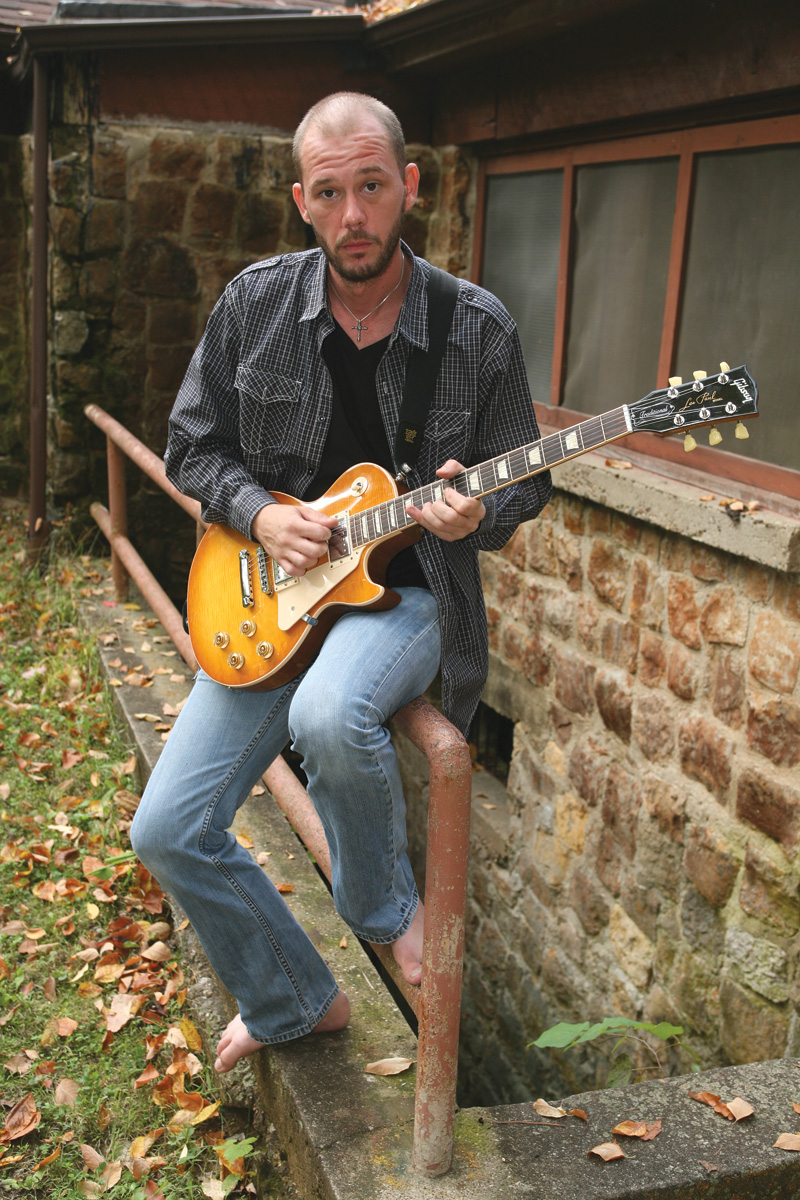 A head taller than the other five cats clad in black, Daniel “Boscoe” France, 35, knew it was a wrap before taking the stage. On Aug. 18, Guitar Center’s Battle of the Blues grand finals at Club Nokia in Los Angeles was the starting block of Boscoe’s career. Having beat out more than 4,000 blues guitarists in Evansville, Indianapolis, New Orleans, and finally LA, this is where the Madisonville, Ky., native earned his stripes.

Still realizing the amount of responsibility he’s taken on by winning the competition, Boscoe is careful to ensure this career-making opportunity lasts.

Was he nervous? No. Was he barefoot? Yes.

From the top
My uncle, Duke Madison, gave me a guitar when I was 3, and I slept with it. People thought I was weird walking around with a guitar instead of learning how to ride a bike.

“Why do you always have a guitar?” they’d ask.

My mom and dad were supportive and got me what I needed. If a string broke, they’d buy me new ones. In third grade, my uncle gave me money to see a Mötley Crüe and Whitesnake concert at Roberts Stadium, and from then on I went to every show. I didn’t care what it was. I’m into all kinds of music, and know as much or more about traditional, hardcore hillbilly country music as I do blues. The music draws from the same influences — being poor or down, the greatest common denominators.

How’d you get started?
Madisonville is a really small town, and not much was going on there, so I went to Nashville and got a couple of different jobs with different artists — acts with big names like Kenny Chesney, Brooks & Dunn, and pretty much everyone else with a cowboy hat. You know, like Tim McGraw and the Warren Brothers. But I ended up not being able to play a whole lot.

Then I had a son, Gabriel (now 8), which brought me off the road, and I moved back to Madisonville. So I raised my son and started doing these hardcore country gigs with this old guy named Floyd. I kept it tight — if we played at 8 p.m., I’d get there five minutes before with an amp and cord.

I went to Madisonville Community College and got two degrees, one in bio-medical technology and another to teach, and it was weird how I ended up there. I didn’t tell anyone I played guitar for a while, but now Oct. 6 is “Boscoe France Day” in Earlington, Ky., and everything. But still, I was a dad if anyone asked what I did. That’s what I’m good at being.

How’d you get into the contest?
I entered the local one a few times over the years and never did that well and was frustrated. But in the interim I had my little girl, Veda Sioux (now 3), which is why I probably wasn’t supposed to win. I’d go to work, maybe sleep an hour, get my son ready for school, come back, and watch “Mickey Mouse Club” and play Barbies with my daughter all day.

Home’s a small place, and there were lots of haters. I guess people are envious of success. Actually, I heard a great quote the other day: “Your haters are secretly your lovers or they wouldn’t know so much shit about you.”

I needed a microphone, and a hundred bucks to me is a gig. So, I thought, surely I’ll win the microphone from the Evansville Guitar Center store. Then it was a guitar, then two guitars, then endorsements and money and magazines. The money pays the taxes on the other equipment, and the guitars are cool, but they’re just guitars. But I knew I was gonna win by the time I was in LA.

Were you nervous?
I had put more time into a guitar than anybody I know, and I mean anybody because I started so young. Everything I know, I know; it’s not like I read it in a book and forgot it. I had to make my fingers bleed to remember that shit.

The best part of LA was holding Eddie Van Halen’s actual guitar and being around Pete Anderson and Dr. John. The entire experience was surreal.

How’d you end up winning?
I played to win. You know, like a surfer: the one on the wave having the most fun always wins. And no matter how good anybody else was, I didn’t let it deter from how well I played.

My little girl’s mom had a dream that I played “Amazing Grace” the way I played it at my Uncle Duke’s funeral, and it felt like he was winking at me.

I’m pretty schizophrenic when I play — my publicist calls it talent — so I played nice, clean lines to win the crowd over. And, by God, without shoes.

Without shoes?
You remember Jimmy Superfly Snuka? The Wrestler? Well, I tell people I do it because he wrestled barefoot. But really it’s because Ronnie Van Zant from Lynyrd Skynyrd did it. When you go home, the first thing you do is take off your shoes. I’m at home with a guitar, man, so I feel more connected.

What is next for the Boscoe France Band?
With all of the endorsements and the recording session with Pete Anderson, we’re trying to route some shows out to LA, but we’re still playing close to home for the people who have supported us. I’ve got my drummer, Jimmy Cummings, and John Gillespie on bass. John’s as solid as they get. And Jimmy? He’s like chamomile tea. Both are good at dealing with me.

I’m the only lead singer; if you don’t like my voice, you’re screwed, and if you don’t like guitar it’ll be even worse. I’m obnoxious with guitar. It’s horrible to say, but I’m selfish with it and play it only for me. And if I couldn’t play, it’d be like putting shackles on a really good runner and telling them to run.

Visit www.BoscoeFrance.com for shows, videos, and bios about the blues trio.