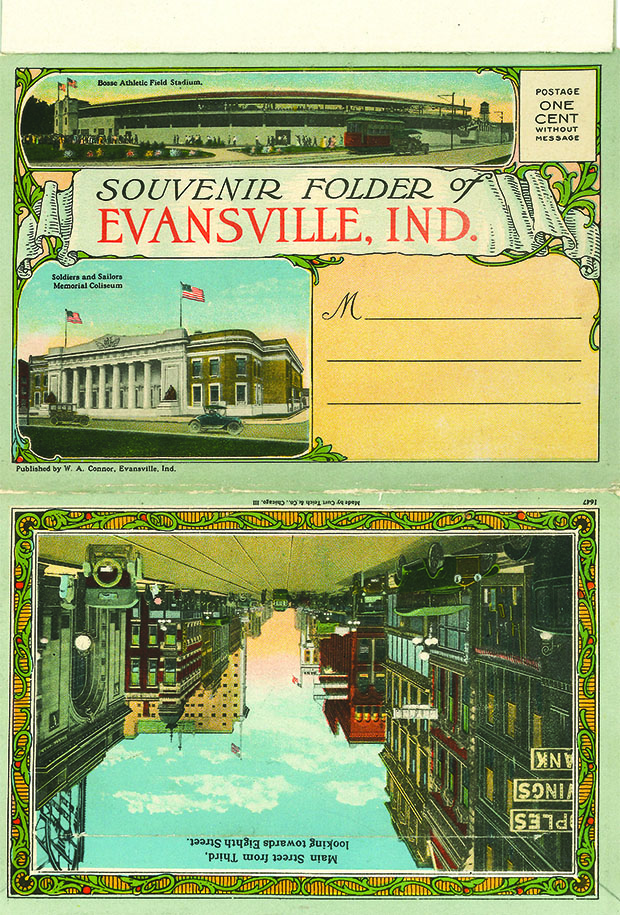 A century ago, colorful souvenir booklets often were exchanged between friends and loved ones to share a person’s travels to cities such as Paris, London, New York — and even Evansville.

The 1917 booklet shown here — also known as a view folder — was originally part of late local historian Henry Meyer’s collection. Fellow Evansville collector Dennis Haire has owned it for about 20 years. The 4.25-by-6.25-inch booklet was manufactured by Chicago’s Curt Teich & Company — once the world’s largest printer of view folders and advertising postcards — and published locally under the W.A. Connor brand in celebration of the centennial anniversary of Evansville’s incorporation as a city. The accordion-style design unfurls to reveal 16 color illustrations of old Evansville landmarks such as the Shelter House at Sunset Park, the Louisville & Nashville Railroad passenger station on Fulton Avenue, Vendome Hotel at the corner of Third and Sycamore streets, and Woodmere Hospital on Evansville’s East Side.

“I love the paintings and illustrations of what was beautiful and important in Evansville in that era,” Haire says. “It is wonderful that we still have many of these buildings to enjoy today.”

Apart from a missing top fold that would have hooked into a slit on the back side, this century-old view folder is in nearly flawless condition. In line with then-mayor Benjamin Bosse’s promotion of civic pride, the booklet includes an “Alphabetical Review of Evansville” from 1917 and lists notable facts about Evansville’s turn-of-the-century industry and economy.

“In many ways, the ABCs of Evansville in 1917 is the foundation of where we are today and has many similarities even after 104 years. Evansville was and still is an important city,” Haire says.

View folders declined in popularity as international travel became more common and connections were maintained digitally. But they remain valuable time capsules to another era of the River City’s history.

“I don’t see (modern) souvenir booklets having the appeal today that they did at that time, but I’m thankful that these things were produced to capture life and Evansville then,” Haire says.

Read more about the ABCs of Evansville in 1917 ~ evansvilleliving.com/articles/abcs-of-1917