Copper House is truly the best of both worlds. The luxurious ambience models high-end restaurants found in larger cities across the country, but the core of Copper House’s menu comes down to comfort food that people from all walks of life can enjoy.

Perkins, a Henderson, Kentucky, native who has lived in Evansville for 10 years, has worked in restaurants across the city since graduating from Sullivan University’s culinary school in Louisville, Kentucky, in 2009. She’s been a chef and server at Farm 57, The Slice, Bokeh Lounge, Planters’ Café, and Roppongi Japanese Steak and Sushi.

“I just wanted to be in positions that I’d be in charge of people, to refresh my memory so I could remember what it was like being in that position,” says Perkins.

Before those jobs, she was the head chef at Tin Man Brewing Co. — the former tenant at the 1430 W. Franklin St. building where Copper House is located — for three-and-a-half years before the restaurant closed in 2017. 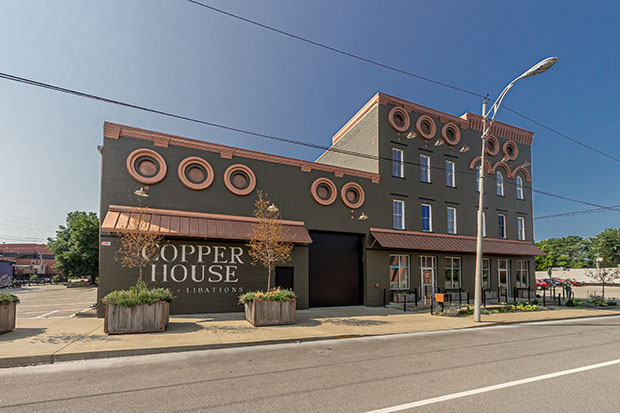 ▲  Located in the historic Franklin Street Boarding House and Saloon building at 1430 W. Franklin St., Copper House offers patrons a close-up view of the kitchen from the Garden Room and space on the second floor for private events and large parties.

The original Franklin Street Boarding House and Saloon building was built in 1869. A fire in 1962 caused damage to the left third of the structure, and it was renovated in 2008 before Tin Man did more remodeling when it opened in 2012.

After Tin Man closed, Perkins planned to fulfill her dream of opening her own restaurant, gathering the necessary investors and acquiring the building in November 2019. She was ambitious about creating not just a restaurant with amazing cuisine, but a place people can go to escape for a casual, laissez-faire night out or an upscale, special-occasion dinner.

“You can come in wearing jeans, shorts, and flip flops if you want to, but you can also get really good quality food that’s plated nicely,” she says.

“My mom and I went back and forth on names for three or four weeks,” adds Perkins. “Originally this building was named Franklin Street Boarding House and Saloon. I wanted to keep part of the name so that’s where the ‘House’ came from. And one of them that my mom brought up was Copper Pot or Copper Kettle, and I was like, ‘I don’t like that end part, but I like Copper.’” 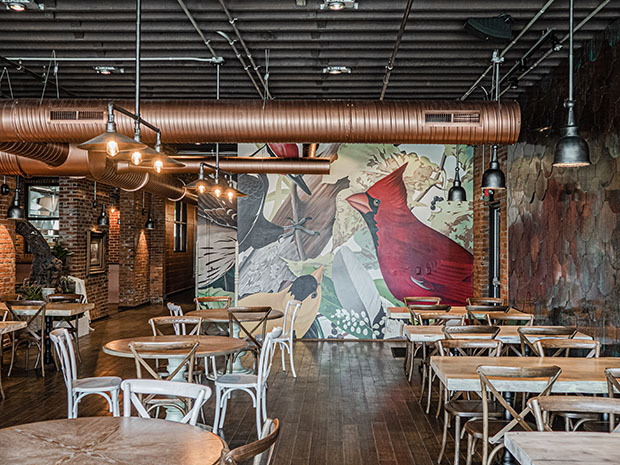 As part of the restaurant’s layout scheme, a new kitchen was installed in the former brewing area at the back, which is also opened to guests in an area Perkins calls the “Garden Room.” The space is decorated with plants from Wilde Horticulture, who also landscaped the exterior. From the Garden Room, patrons get an up-close view of the kitchen.

On the second floor is space for private events and large parties as well as a conference room and office space.

Amongst the other contemporary decor and theming inside the building lie several pieces constructed by local craftspeople — a copper wall to the far side of the entrance, a bird-themed mural adjacent to the copper piece, a large metal giraffe towards the back of the dining room, and wooden tables lining the edge of the dining room.

Although the atmosphere draws customers into Copper House, it’s the food that keeps them coming back. The creative dishes on the menu, each meticulously composed by Perkins and her staff, are simple, yet elegant. 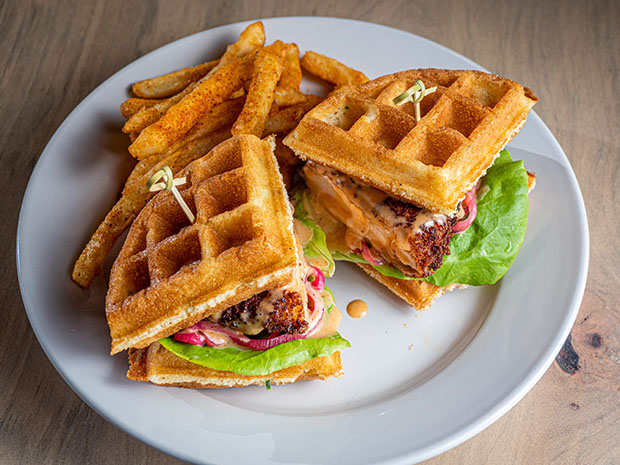 Favorites like the Chicken and Waffle Sandwich, dressed with lettuce, pickled red onion, and spicy maple mayo, or the burger are comfort food at their core, but are enhanced with Copper House charm and touch using handmade ingredients (such as the bacon they make by curing and smoking raw pork belly).

Some of the menu items are influenced from Perkins’ Tin Man menu, such as the Chicken and Waffle Sandwich or the If Pigs Could Fly tacos, a blend of fried pork belly tossed in an Asian glaze and served with coleslaw, wontons, and wasabi cream sauce.

For dessert, try the Salted Caramel Brown Sugar Cake. A dense cake with a fudge-like icing that melts in your mouth, Perkins says she’s been working on the recipe for at least two years.

Along with Copper House’s rustic fare, it offers a full bar with wine, a regional and domestic beer selection, and specialty cocktails.

“I like being able to be creative and food definitely allows you to do that,” Perkins says. “Sooner than later, I’ll be doing some food pairing dinners. Those are my favorite things, where you have four or five courses, you pair a beverage with it, and usually I enjoy making it some kind of theme.” 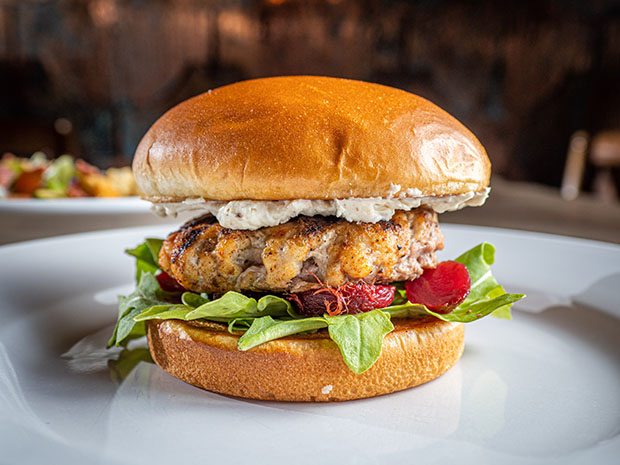 The passion for every dish and design at Copper House is exuberant, and for Perkins, that drive to be creative inspires her to produce an unforgettable experience for each meal.

“The reason I love food is you’re always learning things,” she says. “I will never know everything about it, so it always keeps you learning and interested, and you can play around with flavor and textures.”