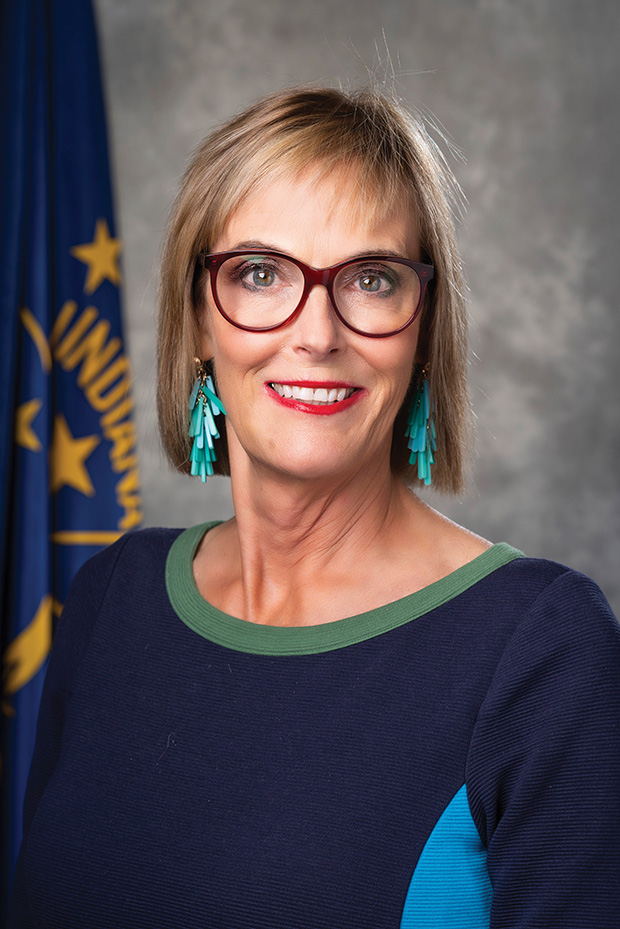 Family: Husband Larry Downs and adult child Courtney
Suzanne Crouch has had quite an interesting career path, from her time serving in county politics to a second term as lieutenant governor. Growing up on the West Side and at Mater Dei High School, never did she think she would hold the second highest ranking position in the state. Her command of both state and local politics has made her one of the most prominent political figures in Indiana throughout the past decade.

Statutorily, I head up four agencies in Indiana. I’m secretary of Agriculture and Rural Development; I head up our Indiana Housing and Community Development Authority, which supports affordable housing projects in Indiana. I head up the Office of Community and Rural Affairs and that distributes $32 million in community development block grant money and then I also head up the newly formed Indiana Destination Development Corporation which used to be our State Tourism Agency until July of last year, it kind of morphed into a quasi-government agency that is not just focused on attracting visitors to Indiana, but also attracting talent and businesses, keeping our students here after they graduate.

You have a long political history in Vanderburgh County — serving as county auditor, commissioner, and also as a state representative. How did this help prepare you for your role as lieutenant governor?
I really believe that God puts us in places and puts people in our lives and I didn’t appreciate it maybe at the time, but looking back, I now see how every role that I’ve had has kind of prepared me for where I am, and prepared me for that next role. So as a result of being auditor and commissioner, and then state rep., and then auditor of state, and now lieutenant governor, I have a vast knowledge and experience at the local and state level and legislative and executive branches. But I think what is even more important than that is that longevity and experience has allowed me to develop a lot of relationships. And at the end of the day, it’s all about relationships.

What was the most interesting private sector job you held before getting into politics?
I think that probably the most impactful job I’ve ever had was probably the first job I had. When I was a senior in high school, I started working as a nurse’s aid at a nursing home and then continued that throughout college. So whenever there were holidays, or during the summer, I would come back and work at the nursing home. And I think what it did is it really gave me a look at the end of people’s lives. It really has over the years given me the appreciation for how important every moment is.

Describe your interactions with the Governor.
We have tremendous respect for each other. We’re kind of each other’s confidant. So we will meet every week for one or two hours, just he and I, no staff around and we really share kind of what’s going on, and what we’re feeling and we talk about things like preparing for the future, initiatives that we have, problems and challenges that we’re facing. I will talk to him and text him periodically during the week, when issues come up or there are things that I want to run by, we have that time carved out down to where we really kind of confide in each other. So it’s kind of that connection, I think, that makes our partnership work so well, because we truly have respect for each other.