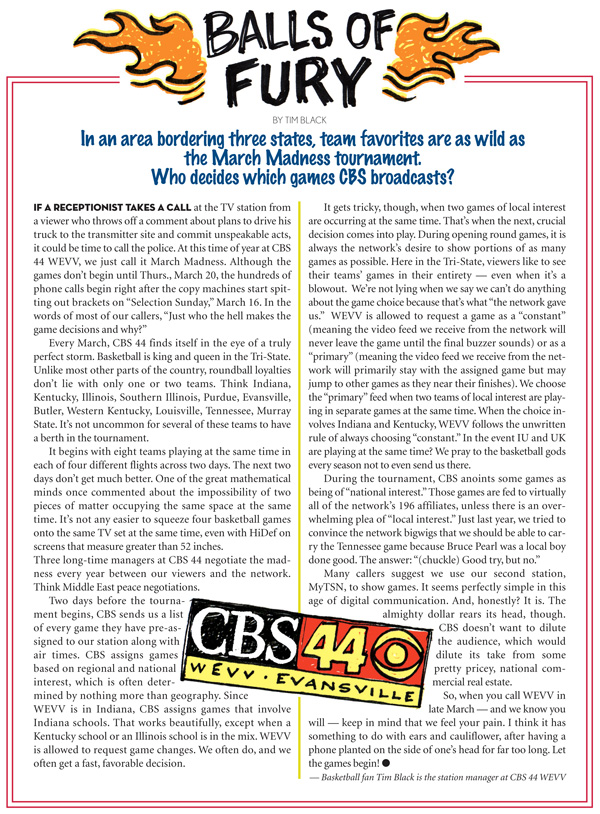 If a receptionist takes a call at the TV station from a viewer who throws off a comment about plans to drive his truck to the transmitter site and commit unspeakable acts, it could be time to call the police. At this time of year at CBS 44 WEVV, we just call it March Madness. Although the games don’t begin until Thurs., March 20, the hundreds of phone calls begin right after the copy machines start spitting out brackets on “Selection Sunday,” March 16. In the words of most of our callers, “Just who the hell makes the game decisions and why?”

Every March, CBS 44 finds itself in the eye of a truly perfect storm. Basketball is king and queen in the Tri-State. Unlike most other parts of the country, roundball loyalties don’t lie with only one or two teams. Think Indiana, Kentucky, Illinois, Southern Illinois, Purdue, Evansville, Butler, Western Kentucky, Louisville, Tennessee, Murray State. It’s not uncommon for several of these teams to have a berth in the tournament.

It begins with eight teams playing at the same time in each of four different flights across two days. The next two days don’t get much better. One of the great mathematical minds once commented about the impossibility of two pieces of matter occupying the same space at the same time. It’s not any easier to squeeze four basketball games onto the same TV set at the same time, even with HiDef on screens that measure greater than 52 inches. Three long-time managers at CBS 44 negotiate the madness every year between our viewers and the network. Think Middle East peace negotiations.

Two days before the tournament begins, CBS sends us a list of every game they have pre-assigned to our station along with air times. CBS assigns games based on regional and national interest, which is often determined by nothing more than geography. Since WEVV is in Indiana, CBS assigns games that involve Indiana schools. That works beautifully, except when a Kentucky school or an Illinois school is in the mix. WEVV is allowed to request game changes. We often do, and we often get a fast, favorable decision.

It gets tricky, though, when two games of local interest are occurring at the same time. That’s when the next, crucial decision comes into play. During opening round games, it is always the network’s desire to show portions of as many games as possible. Here in the Tri-State, viewers like to see their teams’ games in their entirety — even when it’s a blowout.  We’re not lying when we say we can’t do anything about the game choice because that’s what “the network gave us.”  WEVV is allowed to request a game as a “constant” (meaning the video feed we receive from the network will never leave the game until the final buzzer sounds) or as a “primary” (meaning the video feed we receive from the network will primarily stay with the assigned game but may jump to other games as they near their finishes). We choose the “primary” feed when two teams of local interest are playing in separate games at the same time. When the choice involves Indiana and Kentucky, WEVV follows the unwritten rule of always choosing “constant.” In the event IU and UK are playing at the same time? We pray to the basketball gods every season not to even send us there.

During the tournament, CBS anoints some games as being of “national interest.” Those games are fed to virtually all of the network’s 196 affiliates, unless there is an overwhelming plea of “local interest.” Just last year, we tried to convince the network bigwigs that we should be able to carry the Tennessee game because Bruce Pearl was a local boy done good. The answer: “(chuckle) Good try, but no.”

Many callers suggest we use our second station, MyTSN, to show games. It seems perfectly simple in this age of digital communication. And, honestly? It is. The almighty dollar rears its head, though. CBS doesn’t want to dilute the audience, which would dilute its take from some pretty pricey, national commercial real estate.

So, when you call WEVV in late March — and we know you will — keep in mind that we feel your pain. I think it has something to do with ears and cauliflower, after having a phone planted on the side of one’s head for far too long. Let the games begin!