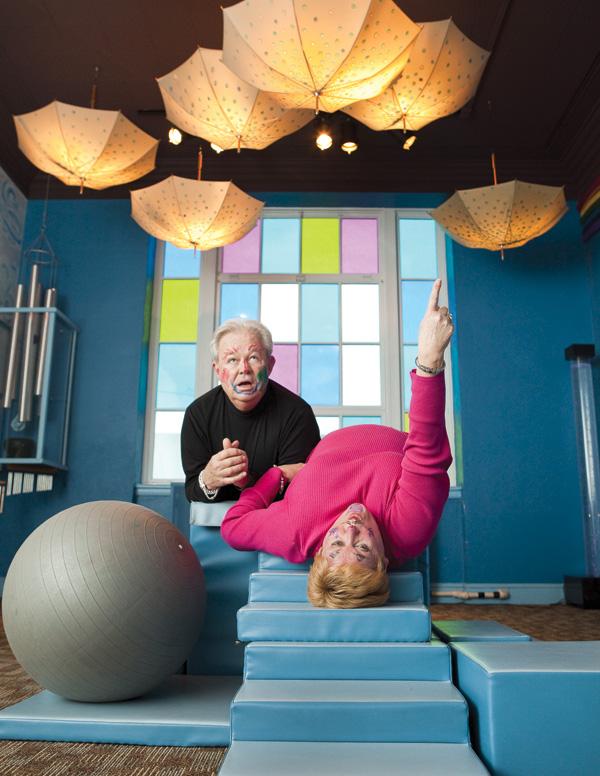 A root beer saloon. Roller skates. Dancing shoes. From places for playing to fascinating people to cool skills, couch potatoes aren’t welcomed here. Grab the bull by the horns — literally — and have some fun this spring.

Sue and Jack Schriber are as extroverted as any one couple can be. They’ve translated a lifetime love of theater into a community passion by educating students and creating civic performances. To know them is to embrace enthusiasm, and the Schribers are extraordinary volunteers who donate to worthy causes such as the Public Education Foundation/EVSC summer musicals, Evansville Civic Theatre, Evansville Philharmonic Orchestra, and the Reitz Home murder mysteries. 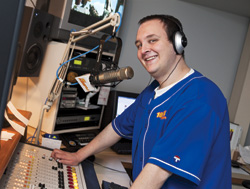 The Rob sounds young yet polished, professional yet laid back, relaxed yet engaged. On weekday evenings, the Kiss FM radio personality (who ditches his last name, Hirschbuhl, when on air) may have all the credentials to host a great show, but what he’s done with that talent is more important: The Rob has created a community. His regular callers (they phone so often, they’ve earned nicknames) are as vital to the show as his affable, chuckling sidekick, Big Boy (who weighs 439 pounds). It’s interactive, fun, and just a little racy. www.1061evansville.com 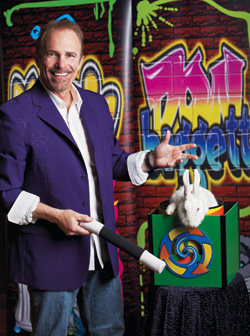 Don Baggett had been practicing magic for six years before landing his first paying gig ($15!) at a nursing home. The 16-year-old piled into his 1972 Impala filled with props and entertained the geriatric crowd. The show’s success led to a lifetime of magic. “I liked getting in front of people,” Baggett says, “but I couldn’t sing worth a darn.” He performs around 250 shows a year on top of his fulltime job as the operations manager of Rheem Manufacturing. Magic is “a hobby I’ve been fortunate enough to do a lot of,” Baggett says.

2011 marks his 25th anniversary in the International Brotherhood of Magicians, an organization dedicated to the art of illusion. His dedication will earn him a spot in the Order of Merlin, an elite group of magicians, later this year. Credit Baggett’s upbeat personality for his longevity. “My job isn’t just to fool (the audience),” Baggett says. “We’re supposed to have a good time together.”

For more on Don Baggett and the International Brotherhood of Magicians, visit www.donbaggett.com or www.magician.org. 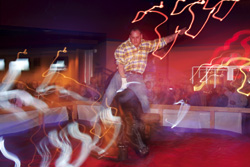 It’s not like Evansville’s never had a bar with a mechanical bull before, but when Stoney’s opened in early 2011, the newest addition to Casino Aztar’s nightclub-centric The District was a hit. Perhaps that should be “hits,” plural, as in “the number of times bodies hit the floor after a ride on the mechanical bull ended with an abrupt toss.”

But patrons’ hour-long wait in February’s bitter cold signaled that this country-western-themed bar with waitresses clad in bikinis and chaps meant the inside was standing-room-only. Not that the beer-pong and cornhole players seemed to mind when they eventually elbowed their way through the packed crowd to the 2,000-square-foot, hardwood dance floor.

That popularity hasn’t let up. When the LoCash Cowboys, a well-dressed country music duo, took the Stoney’s stage, an estimated 1,500 were in attendance. Welcome to the party. www.stoneysevansville.com[pagebreak] 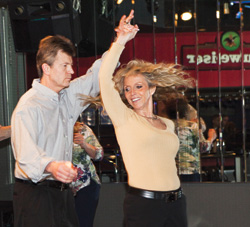 Evansville River City Bop Club
With an eclectic mix of music styles including bop, shag, and rhythm and blues, this swing dance club is a blast from the past. Each meeting at the Holiday Inn (formerly the Evansville Airport Marriott) begins with a lesson for beginners and intermediates followed by open dancing. This swinging group meets once a month and welcomes both members and nonmembers, but since the venue serves alcohol, you must be 21 to attend. www.ercbopclub.com

International Brotherhood of Magicians, Ring 56
From mentalism and illusions to ventriloquism and kids’ shows, this organization offers a stage for aspiring magicians to practice and perform, but with a 64-year history in Evansville, this is one group that won’t be disappearing. Guest lectures come from seasoned professionals such as Aldo Columbini, an award-winning magician who mixes comedic, parlor, and stage magic as he performs across the globe, and Dan Harlan, known for his unconventional use of rubber bands and cutting-edge card tricks. www.ring56.com

Daughters of the Nile
Named after the Egyptian goddess of women and children, Isis Temple No. 41 raises money for children through card parties, handmade quilts, and county fairs. Their contributions go to the Shriners Hospitals for Children. Formed in 1928, this hierarchical and ceremonial organization attracts ladies who are related by birth or marriage to Shriners, Master Masons, or Daughters of the Nile. www.hadishrine.org/nile

Evansville Astronomical Society
Boasting members from physics professors to hobbyists, the EAS provides a venue for astronomy lovers to meet and stargaze away from bright city lights at the Wahnsiedler Observatory in Lynnville, Ind. Members receive unlimited access to the facility’s two telescopes (a 14-foot reflector and a 12.5-foot reflector), and the public is invited to take private or public tours. www.evansvilleastro.org

Evansville Kennel Club
Part of the Kentuckiana Cluster of Shows, the largest all-breed dog show in the nation, this club is a haven for dog enthusiasts. Though now independent of the private restaurant that shared its name, the 113-year-old nonprofit promotes the welfare of dogs through funding, education, training, and research. The EKC is a place for showers, breeders, trainers, or just happy dog lovers. 812-426-2583 or www.evansvillekennelclub.org

As the co-owner of T.R.U. Event Rental (www.trueventrental.com), the very nature of Karen LeMond’s job is fun: party planning. LeMond may tell you her job is stressful — and we’re sure she’s faced a few bridezillas — but we’ve never gone wrong with a T.R.U. party. A bonus: Her vibrant office floor is a reminder she’s a woman who isn’t afraid to use color, especially purple, which she uses in her outfits regularly. You can find her at the University of Evansville men’s basketball games. She’s the one with the purple glasses and matching fingernails. 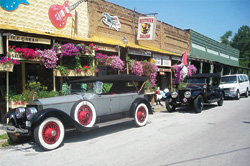 Inside the Root Beer Saloon in Alto Pass, Ill., (less than two hours west of Evansville in wine country) are 175 mounted deer antlers and more than 150 birds — all killed and stuffed by saloon owner Michael Blank. He’s a hunter and taxidermist, and as an interior designer, Blank has a kitschy aesthetic, best seen inside the saloon. Should you decide you’re just browsing at the overstuffed-on-décor restaurant, Blank kindly will ask you to leave. It’s not a museum, and besides, the three micro-brewed root beers are sweet bliss (and don’t forget about the deli menu). But Blank is an attraction, too. He chops wood to make well-received guitars. Plus, the man is one great storyteller, and good news: He and his longtime girlfriend Cynthia Lucas are the two employees, so chances are good he’ll be working. www.rootbeersaloon.com 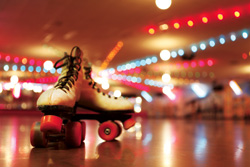 Remember the roller skating parties of your grade-school days? The disco ball spun overhead as Journey tunes blasted from the speakers, and your biggest worry was tripping in front of your prepubescent crush. Now, visitors to Evansville’s Skate World can choose between traditional high-top skates or the slimmer in-line variety, but the four-wheeled fun remains the same. Though the rink offers family nights, kids’ days, and a squeaky-clean setting, skating isn’t just for youngsters: The American Heart Association lists roller skating among the best aerobic activities to improve heart and lung health. Don’t stop believin’.

How to Learn a New Hobby

When you were a kid, fun learning opportunities abounded: after-school art classes, summer camps, and school clubs. As an adult, educational opportunities still exist — you just have to search a little harder. Here’s a primer on local experts who can help you pursue a new hobby. (Hands-on instruction beats YouTube any day.) 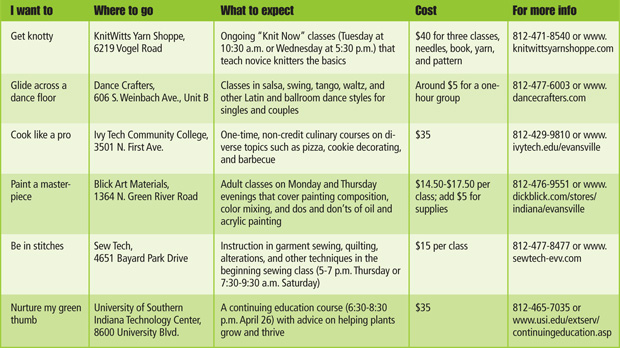 Kids Kingdom
Located at Sunrise Park, near the LST 325 and the Riverfront corridor of the Pigeon Creek Greenway Passage, this playground is a relative newcomer to Evansville’s landscape. Built in 2004 entirely by volunteers, it’s a sprawling complex of slides, tunnels, monkey bars, and — true to its name — a wooden castle. The grassy grounds are ideal for picnics or games of bocce. www.evansvillegov.org/parks

cMoe
What began as Hands On Discovery, a Junior League of Evansville signature project housed in Eastland Mall, has evolved into the 18,000-square-foot Koch Family Children’s Museum of Evansville (22 S.E. Fifth St.). Now located Downtown and guarded by a polka-dotted Tyrannosaurus rex named Millie, cMoe — which turns 5 this year — is a whimsical wonderland. Kids itching for warm-weather fun after a long winter will love the Quack Factory Gallery, where they can take off their shoes and splash in the company of a 20-foot-tall duck. www.cmoekids.org

Mall Carousel
If you grew up in Evansville before the 1970s, you may remember going ‘round and ‘round on the hand-carved carousel across from Mesker Park Zoo. That carousel left the River City in 1973 (it now resides in a North Carolina amusement park), but you can take a spin on another classic, Venetian-style carousel in the food court of Eastland Mall (800 N. Green River Road). In the midst of a flashy retail scene, the elegant horses, spinning teacups, and childhood glee remain timeless. www.simon.com/mall/?id=164 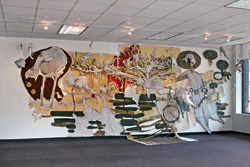 We love the Bower-Suhrheinrich Foundation Gallery and the Evansville Museum of Arts, History and Science, but the Tri-State offers plenty of other artsy places. Whether you’re hankering to buy a masterpiece or just admire the creativity of local artists, these off-the-beaten-path galleries deliver.

Studio Slant (www.studioslant.com)
412 E. Second St., Owensboro, Ky., 270-684-3570
10 a.m.-5:30 p.m. Tuesday-Saturday
To curator Katherine Taylor, Studio Slant is a protest of what she calls the “oatmealization” of the world. (Think mass-produced items in big-box stores.) This new art gallery and boutique in fast-growing downtown Owensboro features jewelry, photography, pottery, and other handmade items. A few highlights: the recycled aluminum can jewelry made by Paula Canant of Red Hot Design and the whimsical paintings of Lexington, Ky., artist Ike Moody.

Melvin Peterson Gallery (art.evansville.edu)
Corner of Lincoln and Weinbach avenues, 812-488-2043
Noon-3 p.m. Monday-Friday (August through May)
On the state tourism department’s Indiana Insider Blog, a museum-weary Erik Deckers wrote that the art galleries at Evansville’s universities “really shook me out of my artistic torpor.” One of those galleries, the University of Evansville’s Melvin Peterson Gallery, was dedicated last fall in the former bookstore space. On display through the end of March is the annual student art competition, and from April 9-May 6 is an exhibition showcasing the works of graduating seniors.

Riverwind Gallery (www.riverwindgallery.com)
10400 State Route 662 W., Newburgh, 812-853-2537
9 a.m.-5 p.m. Tuesday-Friday, 10 a.m.-3 p.m. Saturday
Where else can you find duck decoys, colorful pottery, and paintings of local landmarks under the same roof? For more than three decades, Riverwind Gallery has been a staple of Warrick County’s arts scene. From March 12-April 30, the gallery and frame shop hosts an exhibit of beautifully detailed paintings by Joanne Scott Massey and Diane Ubelhor Wunderlich. (See “Paint for a Cause”.)

Girls Just Want to Have Fun

What’s more fun than pampering yourself — on a weeknight? Save the date for Thursday, May 5, when Allure: An Evening for Women will bring local women together with amazing shopping deals, wine, hors d’oeuvres, style shows, and more. The indulgent evening hosted by Tucker Publishing Group, WTVW FOX 7, and the Sholar Center will take place at the Evansville Country Club. See our Guide for more.