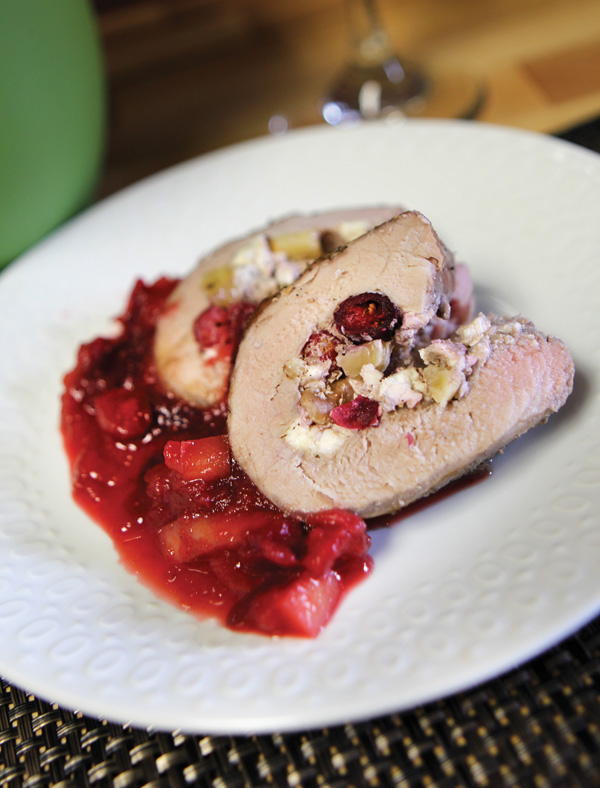 With any long-running television series, there is a buildup of demand just before a new season begins. Revisiting, remembering, and renewing old favorites. Such is life with me regarding seasonal fare. To my regular readers, you know how I enjoy the comfort of craveable dishes while exploring new creative cuisines.

Pork tenderloin always has served me well as one of the most versatile protein choices when it comes to experimentation. It has a good base of flavor yet takes any seasonings and co-exists with any other ingredients given to it.

Nearing the holiday season, I love anything with either pumpkin or cranberries involved. For this recipe I chose to butterfly and stuff the tenderloin with a blend of cranberries, apples, feta cheese, and toasted walnuts. I also chose to serve it with a cranberry/apple cider compote. The feta cheese and toasted walnuts give the dish a nice savory backbone and counterpoint to the sweet apples and tart cranberries.

I hope this dish brings you memories of past holidays while allowing you to
create some new ones at the same time. Enjoy!

Begin preparing the pork loin by butterflying it (cut lengthwise down the center leaving a half-inch and folding it open). Tenderize the loin to roughly half-inch thickness. Season with salt, pepper, and rosemary generously on both sides. Toast the walnuts in a skillet until the just begin to brown and become aromatic. Place the toasted walnuts, sliced apples, cranberries, and feta cheese along the center of the loin, leaving room on either side to close the loin. Roll the loin tight around the stuffing and tie it closed with the twine. Bake at 325 degrees for 60-75 minutes, until the loin is at a temperature of 145 degrees.

Meanwhile, in a small saucepot, combine 1.5 cups cranberries, one whole sliced apple, and enough cider to almost cover the fruit. Bring to a boil, macerating the cranberries as the mixture warms. Reduce heat to a simmer and add the brown sugar. Reduce the liquid by half and remove from the heat. Sauce will thicken as it stands.

Once the loin is finished, let it cool for 10 minutes. This will allow the juices to soak back in and keep the pork as tender as possible. Slice at half-inch increments, and top with the compote. I recommend serving this with a savory vegetable such as sautéed Brussels sprouts, but no matter your choice of side dish, this loin is sure to please.