Bird is the Word

Diving and swirling through the water at the Penguins of Patagonia exhibit, the 14 Humboldt penguins who have inhabited Mesker Park Zoo & Botanic Garden since Oct. 2021 look right at home. Their at-ease attitude and natural behavior is no surprise to zookeepers and it’s all thanks to their expert care and behind-the-scenes mechanics of the state-of-the-art $7.2-million exhibit made possible in part by a generous donation from Wayne and Beth Kinney.

Each day from 9 a.m. to 4 p.m., guests who enter the zoo will be greeted by the flightless birds, each of which is tagged on their wings to tell them apart. They also have microchips under their skin, but executive director Erik Beck says most of the keepers can tell the penguins apart on sight.

The head of Mesker Park Zoo since August 2017 and employee since 1995, even Beck’s experienced eyes can’t look away from the newest resident’s antics sometimes. 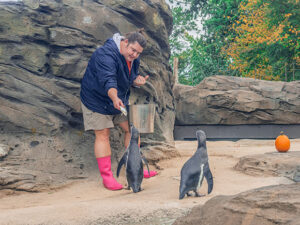 “There’s a lot of neat things going on here and they’re a very fun animal,” adds primary penguin zookeeper Chris Felts. “They’re always doing something. Sometimes they get the zoomies and run around like crazy little penguins do.”

Felts, an employee since Feb. 2016 who has worked at some of the country’s top zoos in St. Louis and Omaha, Nebraska, oversees the penguins care, from feeding and breeding to enclosure cleaning, and guest experiences with the penguin feeding experience and daily keeper talks. All so that the penguins can safely and happily continue swimming in their 40,000-gallon pool.

While the exhibit, which has underwater viewing areas that go to six feet below grade, is expansive, there is much more than meets the eye going on behind the faux rocky coastline.

The most obvious sign of a behind-the-scenes world are small openings in the back wall of the enclosure. A sharp eye might even catch a glimpse of the penguins waddling into the dark holes, but they aren’t hiding out in a secret cavern. The penguins are entering the nesting room.

A long, narrow room filled with pet carriers-turned-nesting boxes, this space is for each season’s couples to lay and watch over their eggs until they hatch. The carriers’ doors give keepers easy access to view and interact with nesting parents and eggs if needed. Visitors to the room should keep their voices low so as not to disturb any expecting mothers, but also think about plugging your nose.

“(The nest room) is filthy, and it’s supposed to be filthy,” Beck says. “We actually don’t clean this area much on purpose because it’s their nest and in the wild it would be filled with what we call guano (penguin feces), and actually this room stays dark most of the time.”

During Evansville Living’s visit, one out-of-season mother eyed us captiously as she sat on her egg. An egg that Beck explained wasn’t viable and would be replaced with a dummy. Penguin pairings can be favorable or unfavorable for reproducing based on genetics and the need for chicks. If the pair lays an egg and the staff does not want that pair to reproduce, they will switch the real egg and replace the “dummy” egg so they can continue to incubate and prevent them from laying a second egg.

“This is actually outside of her nesting season, but she decided to lay another egg,” he says. “It’s considered a zero rating for us, which means we would not let her keep it because of the genetics and relatedness of the specific mate, and all that. It wouldn’t live so we have dummy eggs.”

To enter the nest room, zookeepers first have to pass through three other sections of the building’s top floor. The first is a small room with two windows, one in the wall and one in the miniature corner pool, called the isolation room. If a penguin needs to be separated for health or any other reasons from the flock, they can be safely quarantined while still having eyes on their companions in the colony room.

A larger version of the isolation space, the colony room also has some viewing windows, a ramp into a spacious indoor pool, and a Dutch door leading to the outdoor exhibit for both keepers and penguins alike.

“They have access to this (the colony room) all night,” Beck says. “Sometimes if you look on the Channel 14 camera, you’ll look at night and you won’t see them out there. They like being inside at night.”

Connecting all of these spaces is the final room which is a human-centered space for the zookeepers to store and prepare food and medicine, information, camera monitors, and other technical care equipment.

The prep room is where Felts spends most of his time. When he isn’t thawing buckets of herring and capelan fish for the penguin feeding experience — which is $5 per guest and occurs four times a day until the fish runs out — or gathering preventative medications and supplements, he is focused on preventative care.

“In the summertime, malaria can be a big problem for penguins,” he says. “We have fans going out there which help push away mosquitos. There are anti-malaria meds which is twice a day whenever it’s mosquito time, which is becoming longer and longer.”

Felts pointed out that the entire building, both public and private, is centered around the penguins’ health. The colony and isolation rooms both have a floor textured with grit to help prevent bumblefoot (blisters on the feet), which are caused by too much time on flat, wet concrete. Felts also spends a lot of time scrubbing the indoor floors to decrease the risk of aspergillosis, a fungal infection that can be common and fatal in penguins.

While the upper section of the building is all about the animals, the lower section accessed through stairwells and doors on the backside of the exhibit are a maze of mechanical equipment.

It all starts with the main pool, which is kept at about 55-68 degrees. In the summer, the pool is colder than the outside temperature and, in the winter, it’s warmer. This temperature control system uses a natural geothermal technique that saves water and energy by pulling coolant from Mesker’s Lake Victoria, running it through filtration systems, using it, and sending it back down.

“If you think about your air conditioner at home, it probably has a unit outside that has a fan on it, has coolant in it, and it gets cold liquid that it sends back to your home and then that cold liquid is what keeps your house cold,” Beck says. “We use the cold liquid from the bottom of the lake, and we have loops that go underground. It has miles of coil in the bottom of the lake that bring fluid up here and it cools the pool, cools the air, and everything like that.”

Besides saving energy and money, the exhibit’s systems also save an enormous amount of water. Unlike a residential swimming pool, which pumps water in, filters it, disinfects with chlorine, and then discards the old water, Mesker Park recycles it. The first storage tank they use is a clean basin, which stores the old water that would normally be flushed into the sewer system.

After being disinfected with ozone (which utilizes a manipulated oxygen molecule, O3, instead of O2), the water goes into the pool systems. When it’s time for a backwash — the process of pumping the water through the system in reverse to clean it — the dirty water is stored in an 8,000-gallon tank until it can be cleaned and reused again.

Another tank in the main machine room holds dirty water, or rainwater, collected from the roof. It is also filtered, cleaned, and used for all of the penguins’ pools.

“It’s trying to use as little water as we can,” Beck says. “If you look at the United States, the west part of the country is in a drought that’s lasting years and years. Fortunately, east of the Mississippi (river), we don’t have that problem yet, but water is still an expensive commodity.”

The cherry on top of this one-of-a-kind system is an automated control program called the life-support system. Tucked towards the back of the mechanical areas, with only a small touch-screen control panel, the digital system was custom built for Mesker Park’s needs.

It allows zookeepers to evaluate and manipulate every system, including starting the backwash system with the touch of one button. Equipped with an inspection system and pool temperature control system, it was an expensive cost up front, but one Beck says is worth it.

“There is no penguin catalog, so it’s all engineered and designed just for this space,” he says. “But I’m a big believer in some level of automation. It makes things easier on the staff and saves money on the back end.”

“We have a pretty nice exhibit, first of all,” Felts adds. “I don’t know if everyone naturally thinks that the Evansville Zoo is going to have state of the art exhibits, but it’s kind of what we have. We have a lot of water space, a lot of land space. It’s a fun exhibit; a lot of work went into it, so hopefully people come see it.”

Photos by Zach and Audra Straw. Video by Zach Straw.