Dan Sauls’ deep blue 1969 Dodge Super Bee is the product of nearly 20 years of restoration and a lifetime of nostalgia. Purchased in 2000, the Super Bee is the same year, make, and model as his very first car.

Sauls grew up in Evansville as the youngest of five siblings. In the 1970s, his father Virgil purchased a ’69 Super Bee for his children to share. Sauls graduated from Bosse High School in 1982 and sold the car about two years later.

“I had to sell it because it wasn’t really practical as a daily driver,” he says. “When I had to sell my original one, I was like, ‘Someday, I’m going to find another one and restore it.’”

Sauls studied business management at the University of Evansville, where he met his wife Susan. In 1996, his mother Lois died, leaving him money that he used to purchase his new old Super Bee. After a four-year search, Sauls found the rusted car in a junkyard in Georgia through Hemmings Motor News collector’s magazine. 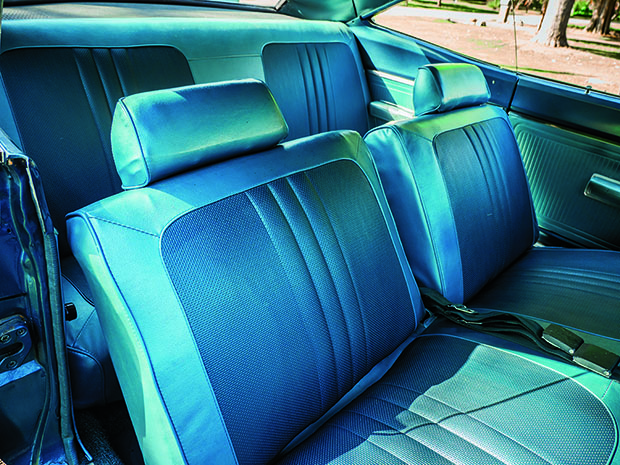 Using skills he learned from his grandfather and brother-in-law, Sauls restored the body, original 383 Magnum engine, transmission, and paint. During the almost two-decade process, Sauls also restored and sold four other cars, including a 1967 Ford Mustang.

After retiring last year as Old National Bank’s vice president of IT project management, Sauls is redoing his retirement home at Lake Barkley, Kentucky, complete with a pole barn for his Super Bee. Susan calls the space “the beehive.”

“This is a piece of history,” he says. “It’s a piece of America, and they don’t make these anymore.”