Designed with input from NASA — true story — the Big Green Egg is stylish, versatile, and perfect for cooking up some unconventional grill foods.

The distinctive grill is popular for its relatively touch-safe ceramic coating and increased health consciousness. Carcinogens are caused by heat loss-induced meat drips that then smoke back up in the meat. In contrast, the Big Green Egg’s thermal insulation helps lock heat into the outer walls, keeping food condensation to a minimum.

The Big Green Egg proves its worth in the wide range of unconventional foods it can bring to a crisp finish. Check out these dishes whipped up by Bassemier’s Grill Supply Co. chef Jeff Raymond. 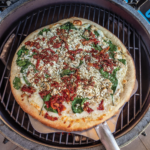 Raise the grid up so your pizza doesn’t directly sit on the grill, which will overcook the crust. At 750 degrees, a New York-style pie can cook in two minutes. 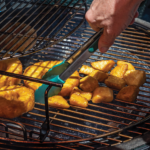 Don’t shy away from using alcohol in a marinade, like in this rum-soaked pineapple dessert. It vaporizes during grilling, leaving a subtle taste without the ethanol. 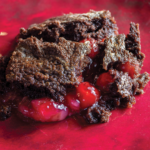 Convection grilling comes in handy for this pineapple cherry chocolate cake. Dump your ingredients in an aluminum pan and use indirect cooking to bake to a decadent dish.