Too Cool for School

The trend is sweeping the nation: Thousands are ditching traditional homes in favor of tiny, mobile living spaces that fit their nomadic, minimalist, and spontaneous natures.

Molly and Shon Shourds have jumped on that bus — literally. They are selling their Rockport, Indiana, home to travel the country, living place-to-place in their completely refurbished 2003 International Bluebird school bus, which they’ve affectionately named Beatrice the Bus.

Downsizing to a little more than 200 square feet, Molly quit her job as a deputy auditor for the Spencer County Auditor’s Office and Shon is quitting his job at Commonwealth Rolled Products in Lewisport, Kentucky, and hitting the road with their dogs Tucker and Henry and cat Lilly for an adventure they’ve long wanted to embark on.

“We love to go places and see new things,” Molly says. “(Shon) came across the Skoolie, and it’s the perfect formula for us. You get to live comfortably in a house environment, but still get to go wherever you want.”

“Skoolies” are retired school buses converted into an RV-style camper. The Shourdses originally considered renovating an RV or shuttle van but realized the cluttered layout didn’t meet their space or design needs. A traditional tiny home, which usually sits atop a trailer, would be difficult to transport to the national parks they plan to visit.

“Those tiny homes are also taller than this, so you have to think about clearances,” Shon says. “Your typical clearance is like 13 feet, and this is just under 11 feet. I built it knowing that you can go under any street-legal underpass.”

The couple purchased their Skoolie in 2019 through Facebook Marketplace and began work on their new home a year later. They gutted the interior wall to ceiling, opening up 35 feet of length and 7.5 feet of width for their new living space. The Shourdses removed the stop arm and warning lights and repainted the bright yellow exterior in a fresh mint green. They did the grunt work of removing 3,000 rivets by hand using only a hammer and chisel.

Apart from the kitchen cabinets, the Shourdses built and renovated Beatrice entirely themselves: the wood front door with windshield glass, walls for the closets, bathroom, and bedroom, and a rooftop deck. Shon even sewed the curtains that provide shade from 11 windows. 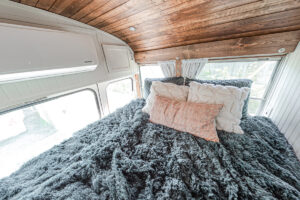 Beatrice’s renovations have cost the Shourdses about $40,000. They set off on their new life in mid-July, first to explore New England during the fall before heading out West for next spring and summer.

“We’ve talked about when we settle down somewhere, buying land and living in this and either building a new tiny home or flipping this and doing a cabin or something, but we want to get long-term use out of this,” Molly says. “It’s going to be our home.”