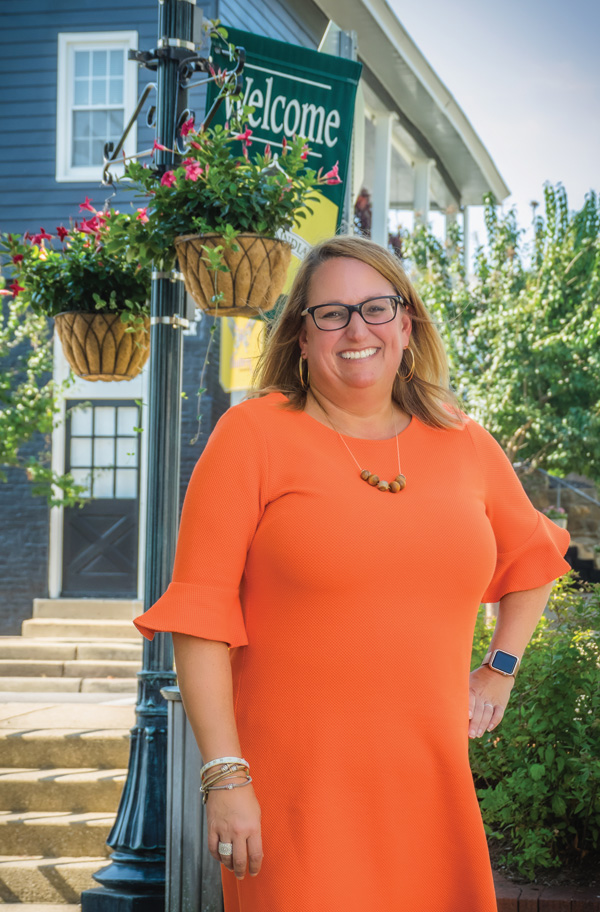 Helen Zimmerman thought she never wanted to work in radio again. She left St. Louis in 1996 after working for station KSD 93.7 and became the development director for the Alzheimer’s Association in Indianapolis.

Zimmerman eventually would come back into the media world after networking with a friend Kathy Hucks, who happened to be married to Chick McGee of “The Bob & Tom Show” in Indianapolis. Through her connection to McGee, Zimmerman began marketing for “The Bob & Tom Show” and, ultimately, for the show’s titular star Bob Kevoian.

“It was pretty amazing to watch it happen, and then to work with it and to introduce it into markets,” says Zimmerman.

In 2015, Kevoian retired, and Zimmerman and her family made a big move to a small town in Southern Indiana. The family has been in Newburgh ever since with Zimmerman heading up Historic Newburgh, Inc. as executive director since January 2017.

“I had gone to DePauw, so I knew how to exist in a smaller Indiana community,” she says. “Evansville and Newburgh, they have everything you need.”

What has surprised you about living in a smaller community like Newburgh?

We had been told it would be very hard to find true friends, because so many people grew up here, went to school, came back, and raised their kids. It would be hard to find real friends. We found that not to be true. I have found friends who will be my friends forever.

What is your favorite memory from your time at ‘The Bob & Tom Show’?
I don’t really have a favorite, but, if I had to pick my favorite, it was watching them a couple of years ago get inducted into the National Radio Hall of Fame — to watch these two people who didn’t think this is what their life would be recognized and honored for what they love to do.

How did you become involved in Historic Newburgh?
The first year we were here, we moved in about two days before school started. I was working for the show, so I was working in the house. I started following Historic Newburgh’s social media pages at that time, and they posted they needed help in the office. It was like 4 hours a week, 6 hours a week. I thought I needed a purpose to get out of the house where I wasn’t going to spend money or eat. I applied, and it grew into what it is now.

What are some initiatives you have started or hope to start?
The organization started from nothing, and it is where it is now. We have very active volunteers. It’s not anything that needs to be changed, but it’s a great opportunity to see how we can grow and expand on it. We are working on some economic progress, concepts, and ideas. We hosted the first tour bus to come through Newburgh in June, and that’s been a year’s effort of our office.

How do you view Historic Newburgh’s role in the community?
Our mission is historic preservation, but economic progress. To make sure it’s a viable community for not only our residents, but also our businesses and merchants. One of our residents said it great — “It’s your job to get people here. It’s our job to get them to come back.”