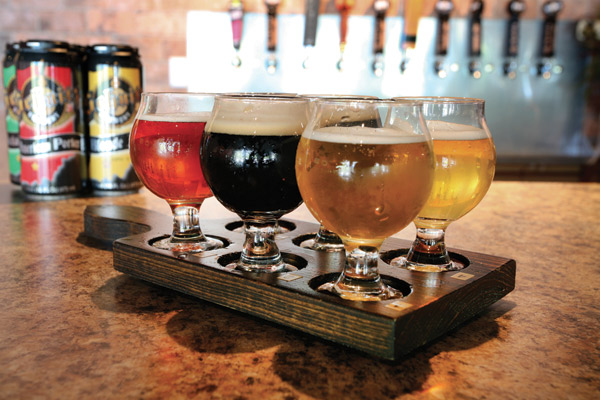 Three years ago, fate began brewing something sweet for the owners of Schnitzelbank Restaurant. At the same time the proprietors of the Jasper Country Club went looking for a new clubhouse owner, the Hanselman family of Schnitzelbank was seeking an event facility.

In 2013, the upper level of the clubhouse was converted into KlubHaus 61, a venue for weddings, corporate events, and holiday parties. The lower level, formerly the Country Club pro shop, locker rooms, and bar, was gutted and remodeled into a brewery and pub.

The Schnitz Brewery & Pub opened in 2015, and offers four homebrews, area microbrews, pizza, burgers, and sandwiches. Brothers D.J. and Nathan Hanselman own the brewery, and Gail Hettinger and Alan Hanselman, co-owners of Schnitzelbank, and Larry Hanselman, the original owner of
Schnitzelbank, own the pub.

“I love it out there because it is the opposite of Schnitzelbank Restaurant,” says Shelby Hettinger, the assistant manager at the Schnitz Brewery. “It is casual and a younger crowd. A lot of people don’t realize that it is family-friendly and we have live music every Saturday night.”

Hettinger says the pub is proud to offer the famous “Rosie’s Pizza,” a recipe born from Rosie and Ed Rees, the owners of former Calumet Club in Jasper. Her uncle Alan knew of their family’s love for the pizza and purchased the recipe.

Pair it with one of the four head brewer Wayne Patmore’s house brews, including the Schnitz Blonde, a German Weissbeir with wheat and barley, and German hops, Schnitz Hefe, an American craft beer with an Olde World Germany taste, the Schnitz IPA, a hoppy American classic, or the dark Schnitz Porter. The Schnitz is offering a new-featured seasonal beer called the American Wheat.

For more information about the Schnitz Brewery Brewery & Pub, call 812-848-2739 or visit schnitzbrewery.com.