Catching Up on a Classic 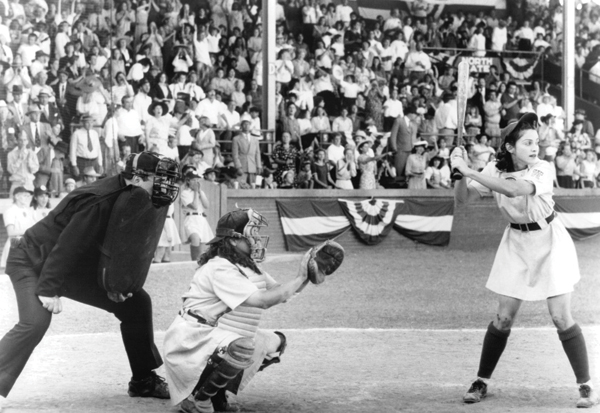 It was 25 years ago when Hollywood arrived in the Tri-State to film the movie, “A League of Their Own.” Directed by Penny Marshall, it starred Tom Hanks, Geena Davis, Madonna, and others. Columbia Pictures chose down-home Southwest Indiana to depict the World War II-era story. Much of the filming took place in Evansville, New Harmony, Huntingburg, and on a rural farm in St. Phillips.

All-girl baseball teams replaced male players in uniform during WWII.  In the movie, filmed at Bosse Field, the Rockford Peaches and rival Racine Belles faced each other in the World Series. Many of the league’s real-life players played for several years after the war.

Several local residents were cast as extras or worked behind the scenes; many still are receiving royalties. One of the most fondly remembered is Justin Scheller from Wadesville who was only 5 years old when he was cast as bratty Stilwell Gardner. Paul Schorr and Carl Smitz of St. Phillips became assistants to Marshall while she directed the farm scenes. While the old farmhouse and barn no longer are there, no detail was overlooked for the movie — the corn was enhanced with green paint and white pigeons were shipped in from Chicago.

Bob Minnette was a member of a local band chosen to be the Dixieland Band in the movie. They were costumed and had to be “on call” for 30 days. After many long days playing, only a few minutes ended up in the movie.

Stacy Baehl was 16 when she was used as a stand-in for actress Lori Petty to milk the cow. Although only her hands were shown, Baehl was put into full costume for three days, exactly like Petty.

Paul Martin actually moved his family out of his Darmstadt home and allowed Tom Hanks to rent it for two months; several of Hanks’ family members visited there. Hanks and wife Rita Wilson dined one night at the Silver Bell Restaurant in St. Wendel.

The boarding house where the girls stayed was a stately home in Henderson, Kentucky, and Hornville Tavern was used for the exterior shot of the team’s night on the town.

This film pumped $10 million into the local economy and left lasting memories.

Dozens of local people were cast as extras in the stands for the World Series scenes at Bosse Field — including Evansville Living’s Creative Director Heather Gray, who was then 13 years old.