Cruisin’ Through the Florida Keys

If your idea of the perfect vacation is to be on, in, or under the multi-hued turquoise waters of the Atlantic Ocean and Gulf of Mexico, tag along with me as I cruise through the Florida Keys, the continental U.S.’s southernmost island chain, from bottom to top — Key West to Key Largo — sampling water-based activities along the way.

As soon as I stepped off the plane at Key West International Airport, I sensed a different vibe. The “Welcome to the Conch Republic” sign on the terminal building, larger and more prominent than “Welcome to Key West,” was my first clue the city’s reputation for being a bit unconventional was well-deserved.

Minutes later, I joined a small group of friends who had flown in from other parts of the United States at The Stoned Crab (stonedcrabkeywest.com) at Ibis Bay Resort. Here, I had my first taste of fresh Keys’ seafood — stone-crab claws, Key West pink shrimp, and Florida grouper.

Before beginning our road trip north to Key Largo, we had one day to explore Key West. We started with breakfast at Blue Heaven (blueheavenkw.com), where dishes like shrimp ‘n grits and lobster eggs Benedict are on the menu, along with “to-die-for” Key Lime pie piled high with meringue (yes, for breakfast!).

It was easy to get around without a vehicle via the hop-on, hop-off sightseeing bus operated by Old Town Trolley Tours (trolleytours.com/key-west). Thirteen stops cover Key West’s major landmarks, including the Southernmost Point at mile marker 0, where tourists pose for photos with the large buoy that has become the city’s landmark symbol, proclaiming it is 90 miles to Cuba. Key West actually is closer to Cuba than Miami, 150 miles north.

The six-toed cats, descendents of Hemingway’s adopted polydactyl feline Snowball, were tops on my list to see on the grounds of the Ernest Hemingway Home and Museum (hemingwayhome.com). Take the half-hour narrated tour to learn about the author’s life and times spent in Key West during the 1930s. Walk across the street to climb 88 steps to the top of the Key West Lighthouse, built in 1825, for panoramic views.

I hopped off the bus to visit Mel Fisher’s Maritime Museum (melfisher.org), where some of the $450 million in gold and silver bars and coins, emeralds, and other jewels are on display, recovered from the Atocha and the Santa Margarita in 1985 after 17 years of searching.

Dinner that evening was at Hogfish Bar and Grill (hogfishbar.com) on nearby Stock Island, where I tasted the Keys’ delicacy hogfish, a diver-caught fish with a scallop-like flavor prepared several ways.

We finished in time to join Mallory Square’s nightly sunset celebration, a Key West tradition. Nothing captures its offbeat ambiance quite like this random gathering of tourists and locals along the pier. Street performers offer up music and magic, vendors display their kitschy crafts, and cell phone cameras are held high in the air in hopes of capturing the elusive “green flash” as the sun slips below the horizon. 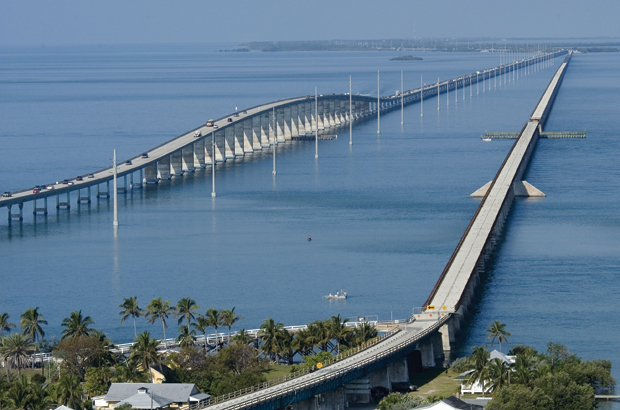 ▲ The historic old Seven Mile Bridge in the Florida Keys near Marathon, Florida, is shown at right, cutting through Pigeon Key, a small island that once housed workers who aided the effort to build Henry Flagler’s Over-Sea Railroad. The more modern span, completed in 1982, is at left.

Three days of our trip were devoted to covering 110 miles along the Overseas Highway. We crossed 42 bridges on our journey through the Keys. We reached our first destination, Bahia Honda State Park (bahiahondapark.com) at MM 37 after traveling over the famous Seven Mile Bridge.

We met Sarah, owner of Serenity Eco Therapy (serenityecoguides.com), for a two-hour yoga and meditation session on paddleboards at the park’s Loggerhead Beach. A foot injury kept me from participating, but I watched as my friends entered the water and struggled to maintain their balance. They left in relaxed silence after mastering yoga postures on the board. Rent a kayak or book a snorkeling tour at the park concession if this isn’t your style.

The very unassuming Grassy Key Outpost (grassykeyoutpost.com) at MM 58 near Marathon was our lunch destination. Part restaurant, part market, I was wowed by its gourmet fare like tuna tartare with ginger, pine nut, sesame oil, and vanilla lychee, or fried green tomato and lobster salad with preserved lemon and tarragon. It’s not your usual roadside diner. Stop here; you won’t be disappointed.

If you are as crazy about sea turtles as I am, don’t miss visiting The Turtle Hospital (turtlehospital.org) in Marathon (MM 48.5), where more than 1,500 sea turtles have been treated and released since opening in 1986. Tours offered several times daily are a great way to observe the work they’re doing to rescue and rehab injured turtles.

No matter when you visit the Florida Keys, you’ll likely be able to participate in some kind of festival, tournament, race, or other special event. Check out the calendar of events on the Florida Keys’ website (fla-keys.com/calendarofevents) to find one occurring during your stay.

Our visit coincided with the 32nd Annual Lower Keys Underwater Music Festival. Held each year the Saturday after July 4, the festival encourages reef protection and environmentally responsible diving. We boarded a catamaran operated by Strike Zone Charters (strikezonecharter.com) at Big Pine Key (MM 29.5) to join other divers and snorkelers on Looe Key Reef, where tunes are piped underwater via speakers suspended beneath boats above the reef. The area is part of the Florida Keys National Marine Sanctuary, which protects the world’s third-largest living coral barrier reef system.

Party boat fishing in Islamorada, considered to be the “Sport Fishing Capital of the World,” was next on our ocean-centered agenda. Expert anglers are quite happy here, since fishing is world class on either the bayside or oceanside. None of us fit into that category so we signed up for the Catch and Cook experience ($40 including bait, tackle, and fishing license) at Robbie’s Marina (robbies.com, MM 77.5). We boarded a 65-foot deep-sea fishing vessel for a half-day outing and returned with a bucket full of fish, which were cleaned, filleted, and delivered to the marina’s restaurant, Hungry Tarpon, where they were prepared with two side dishes ($15).

Before making our way to the Miami International Airport, we squeezed in one more water-based activity — a glass-bottom boat ride at John Pennekamp Coral Reef State Park (pennekamppark.com), Key Largo (MM 102.5). Our excursion took us several miles out to sea to Molasses Reef, one of several prime dive sites within Pennekamp, the first undersea park in the United States.

Our five-day road trip through the Keys was fast-paced, jam-packed with activity, and filled with enough fantastic meals and Key Lime pie to last me until I return. Next time, though, my mission will be less ambitious and more meandering — mile marker by mile marker.