Around here talk of Columbus most often refers to Columbus, Indiana, known for its modern architecture, the 2017 movie “Columbus,” and as the headquarters of Cummins, Inc. But the 14th largest city in the nation, Columbus, Ohio (Indianapolis is the 15th largest; Louisville is the 29th largest, for comparison), is an easy, less-than-five-hour drive from Evansville and offers a diverse change of scenery.

I stayed 20 minutes from downtown Columbus at the new AC Hotel by Marriott in Dublin, Ohio. Located on the Scioto River, the AC Hotel Columbus Dublin (achotels.marriott.com/hotels/ac-hotel-columbus-dublin) is just a short walk across the bridge to charming historic Dublin. Renowned hotelier Antonio Catalan (“AC”) founded the brand in 1998 in Spain before partnering with Marriott to bring it to the U.S. The recently opened Dublin hotel lies at the heart of the city’s Bridgepark development — Dublin’s new $333.6 million master-planned walkable community.

While golfers recognize Dublin as home to Jack Nicklaus’ Muirfield Village Golf Club, you don’t have to get a ticket to the exclusive Memorial Tournament to enjoy Columbus and Dublin. The world famous Columbus Zoo and Aquarium attracts more than two million visitors annually. Columbus is home to Ohio State University, the third largest university in the U.S. And many visitors come for Columbus’ neighborhoods — German Village, Victorian Village, and Italian Village. If you’ve run the Columbus Marathon, you’ve likely toured these storied neighborhoods.

I took the opportunity to explore Columbus’ Short North neighborhood — just south of OSU campus and north of downtown — with Columbus Food Adventures (columbusfoodadventures.com). Our guide, foodie, and company owner Bethia Woolf began the tour in the North Market, the last remaining public market, open since 1876, in Central Ohio. Over a course of about three hours we strolled through Short North, visiting the dining destinations included in the tour. Bethia, who also conducts city tours and brew tours, makes a point to impart Columbus history and highlights along the way. We popped in the Greater Columbus Convention Center to take the ultimate selfie — your face projected as a sculpture titled, “As We Are.”

Back at the AC Hotel, one of 32 AC hotels in the U.S. (with seven more opening in 2018), your trip isn’t complete without a dinner of tapas and custom cocktails or sangria at VASO, the hotel’s Spanish-themed rooftop bar and restaurant. A glass-screened patio surrounds the rooftop bar, offering screened cabanas and fire pit tables. When I visited, locals seemed just as excited about the new dining option in VASO as the hotel guests. The hotel offers 150 well-designed rooms. The modern and refreshing lobby also houses a bar and a European-style breakfast is served daily at AC Kitchen. 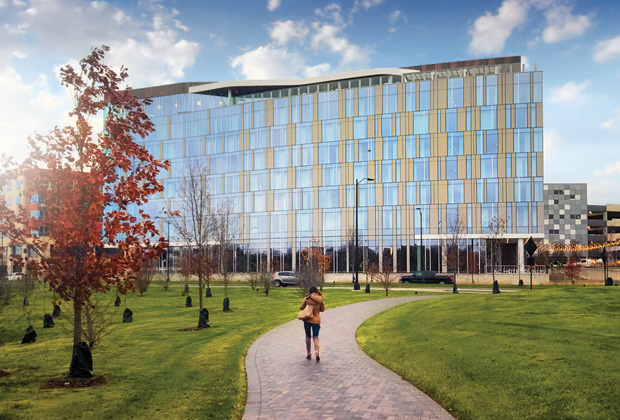 ▲ CAPITAL CITY // The new AC Hotel in Dublin, Ohio (above) is just one of the many reasons to visit the greater Columbus, Ohio, area this year. Founded in Spain, AC Hotels now operates 32 properties in the U.S. with seven more planned in major cities in early 2018.
Share
Facebook
Twitter
Previous articleSomber Speech
Next articleNissan’s Obakemono