One of the things I most enjoy while traveling is visiting churches. A trip to New York City should include a stop at Saint Patrick’s Cathedral, just as a visit to Washington, D.C., should include a visit to the National Cathedral. On our first trip to California years ago, my husband and I visited the Crystal Cathedral in Garden Grove. (It was designed by Philip Johnson, also the architect of the Roofless Church in New Harmony, Indiana.) In Nashville, a visit to the Ryman is a must. It is, after all, a church. I’ve been fortunate enough to visit churches in Amsterdam, Netherlands; Brussels and Bruge, Belgium; Paris; Rome and Florence, Italy; London and Harlaxton, England; Athens, Greece; Quebec City; San Juan, Puerto Rico; and islands throughout the Caribbean. 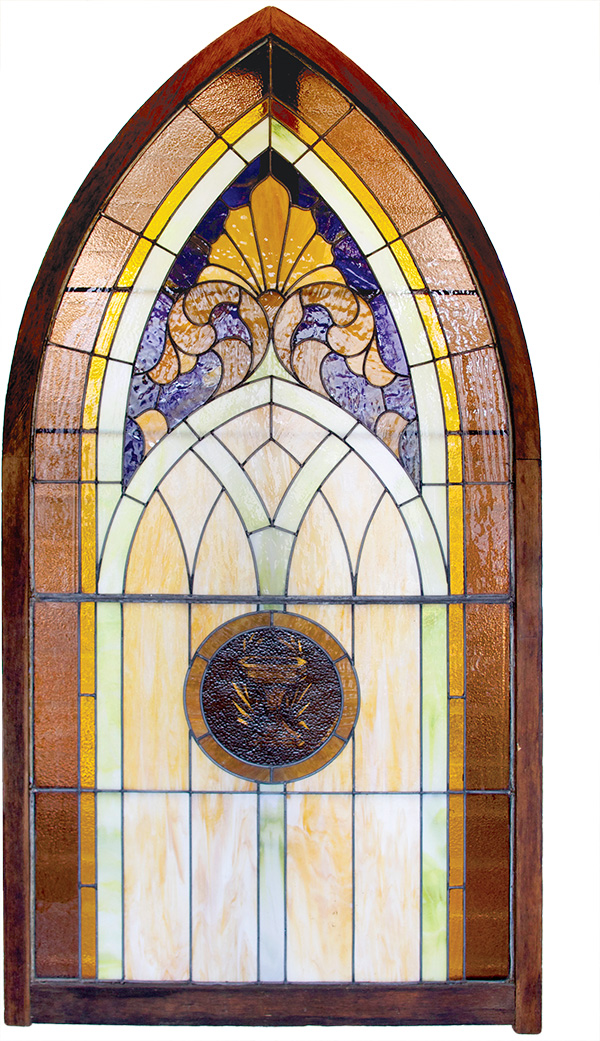 My interest in the physical structure of churches, particularly historic churches, extends to our local buildings of faith. Among the favorite gifts I have received from my husband is a large stained glass church window. Todd bought the window from Shelby Marshall, proprietor of the now closed The Antique Market on Fourth Street in Downtown Evansville, who at the time believed the window, which features a baptismal font etching in the middle, to be from the “old Assumption Cathedral.” Assumption was the first Catholic parish in Evansville and occupied two locations in Downtown Evansville from its inception in 1836 to its razing in 1965 for the construction of the Winfield K. Denton federal building, which houses the Downtown post office.

Still, I have not been able to verify the origin of my window. Marshall, who plans to open a museum at the former antique store at some point in the future, does not recall specific details about the window and notes he bought stained glass church windows from dealers and auctions throughout the Midwest.

The greater Evansville area is replete with beautiful historic churches, dozens of which survived the wrecking balls of urban renewal and still serve as houses of worship. During the Lenten season, Evansville Living’s creative team visited 10 of Evansville’s historic churches. I hope you enjoy the feature, “Sacred Spaces.”