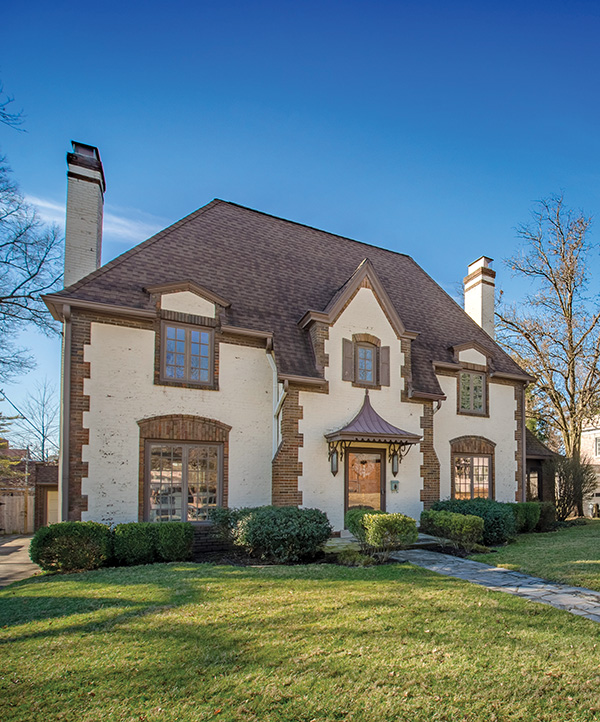 Jake and Janell Bessler believe it was fate that brought them to their Lincolnshire home. After moving into the house in July 2014, the couple found the original drawings from the architects Anderson and Veatch at Willard Library. The date the drawings were started was April 30, 1931, exactly 80 years before the Besslers were married on April 30, 2011.

The second fateful clue their house was meant to be was a small plaque on the panel to the attic where a hidden stairwell pulls out of the ceiling. The plaque has their last name engraved on it in the form of the Bessler Stairway Company, which made the disappearing stairway leading to the attic.

Even buying the property was serendipitous. After meeting their real estate agent by attending several open houses in the neighborhood, Jake and Janell mentioned how much they loved the French eclectic home. The agent happened to know the owners were looking for a condo Downtown, who let the Besslers look at the home before it even was on the market.

“We knew what we wanted as soon as we walked in here,” says Janell. “When we got home, we were talking back and forth about ideas, and they were the same.” 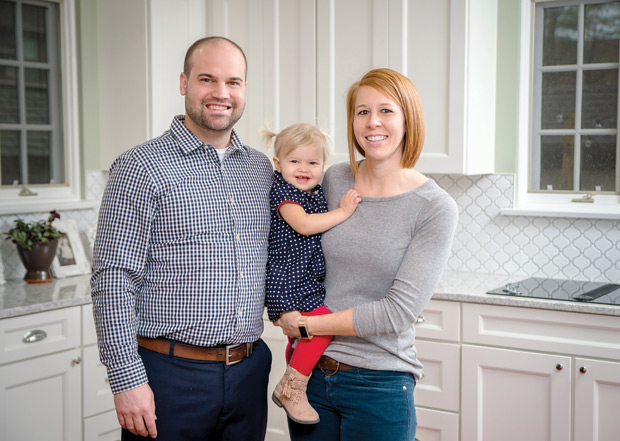 ▲ Jake, Violet, and Janell Bessler have been in their Lincolnshire home almost four years and in that time have completed and lived through a remodel from top to bottom.

Now three and a half years later, the home has been remodeled from top to bottom, a project the couple embraced. Jake grew up in the construction and renovation industry, with his father flipping houses to rent, and still works in the industry today as the vice president, project manager, and one of four owners of ARC Construction, where Janell also works as an administrative coordinator.

“We just enjoyed it growing up, so I guess it’s part of my blood,” says Jake. “I’ve seen the worst demo sites up to new construction.”

With Jake’s background in construction and their previous home serving as practice, the couple had the experience to be able to remodel every space of the historic property.

“I would come home to holes in the walls and bathroom vanities ripped off,” says Janell. “I was nervous but never scared it was never going to go back and be beautiful. I knew he would do good work.”

Knowing this would be the home they planned on settling down in, the couple began by remodeling the guest bedrooms and bathroom, which would be turned into kids rooms once they started their family. Two years after purchasing the house, in May 2016, their daughter Violet was born. 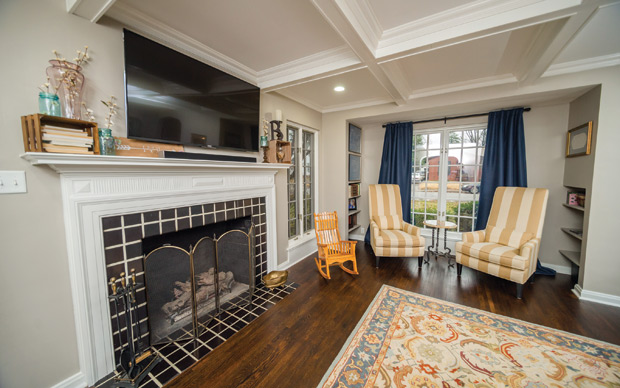 ▲ With his background in construction, Jake renovated every room of the house while keeping original elements to maintain the historic charm.

The renovations weren’t simple changes like updating paint colors and replacing flooring, but projects like tearing down walls throughout the main floor to open up the kitchen and dining room and adding arched openings between that space and the living room to match the original archways of the home.

They also tried to reuse materials as much as possible, sanding down and repainting baseboards and door trim and repurposing doors, knobs, light fixtures, and the flooring from the master bathroom into the kitchen. “We never really took time off,” says Jake. “Everything we did, we lived through. Janell was very good at focusing me on finishing a project before starting another. Whereas when I grew up with my dad, the whole house would be a mess and it would take five years.”

Not only did they take on a major renovation project, but Janell also was pregnant throughout the entire remodeling of the downstairs. During the days leading up to Violet’s arrival, Janell had to stay with a friend because of the toxic smells from sanding and staining and recruited more friends to help paint and lift heavy objects when she couldn’t.

The worst renovating experience during her pregnancy, she recalls, was a day when Jake was putting blocking in the ceiling and told her he would only need to put a couple small holes in the wall.

“So she goes out shopping and I call her and say, ‘Well, you know how the ceiling is plaster? Well, it’s ready to fall off the joist,’” he says. “She was like what do you mean? I said, ‘I have to take the whole
entire ceiling down.’”

“I was bawling,” says Janell. “I was out shopping, I was eight months pregnant, and I was bawling. I come home, and everything from the ceiling is on the floor mounded up.” 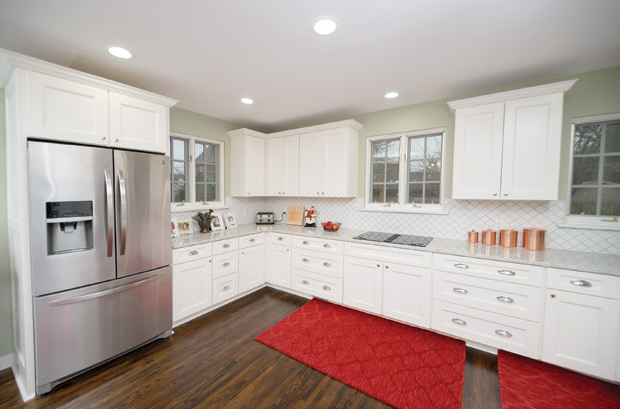 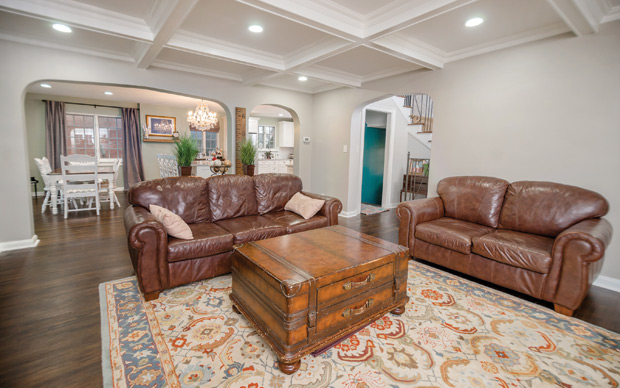 ▲ The kitchen and dining areas were opened to the living room by creating openings to match original archways already in the house.

The downstairs was finished just four days before Violet was born. The next deadline was to finish the master bedroom and bathroom before Violet’s first birthday, which included transforming a sitting room off the master into the bathroom.

They moved the plumbing, electrical, heating and air, and a set of French doors opening to the space. The room also was filled with windows, making it difficult to design around. Jake and Janell repurposed shutters from the main floor windows to add privacy without losing the natural light, with the shutters stopping before reaching the top of the windows.

After three full years of construction, Jake met Janell’s deadline in time for Violet’s first birthday party. The final piece to the puzzle, the master bathroom, now is Janell’s favorite part of the house and has even garnered attention from This Old House Magazine.

The couple, who receives a subscription each year for Christmas, noticed reader submissions in the magazine. They knew the homes and projects featured had to come from someone doing the work — just like they were — so why not submit their own? After reaching out to an editor, they were encouraged to enter competitions sponsored by the magazine. They entered two contests for bathroom and kitchen renovations and will enter another later in the year for the entire house.

“It was really exciting,” says Janell. “I don’t want to sound overconfident, but I knew it had a chance to win because it was really good work.” 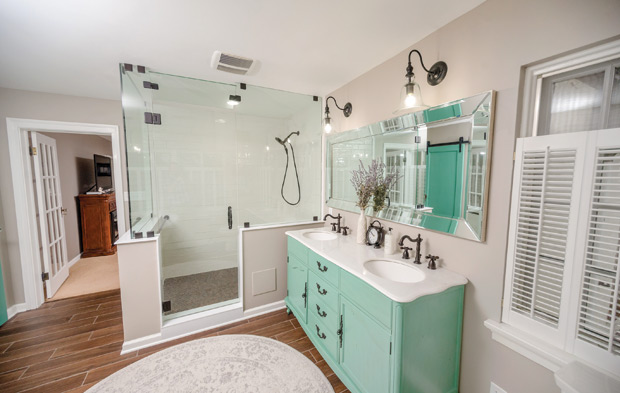 ▲ The biggest remodel project was the Besslers’ master bathroom, which involved transforming a sitting room off the master into the bathroom.

Aside from waiting to hear the results from the kitchen competition and preparing to submit their entire home remodel to This Old House Magazine, there still are a couple projects the Besslers are looking forward to. Jake would like to finish the sun porch, while Janell wants to finish the basement. However, the couple isn’t in any rush after finally enjoying their remodeled home for the first time without any construction.

“The neighborhood is great. Our neighbors are great,” says Jake. “We’re excited to be here.”