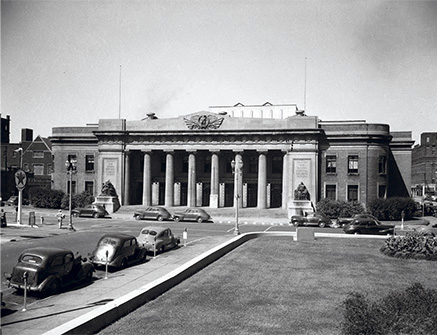 The Soldiers and Sailors Memorial Coliseum has stood at the end of Third Street across from the Old Vanderburgh County Courthouse since 1917. 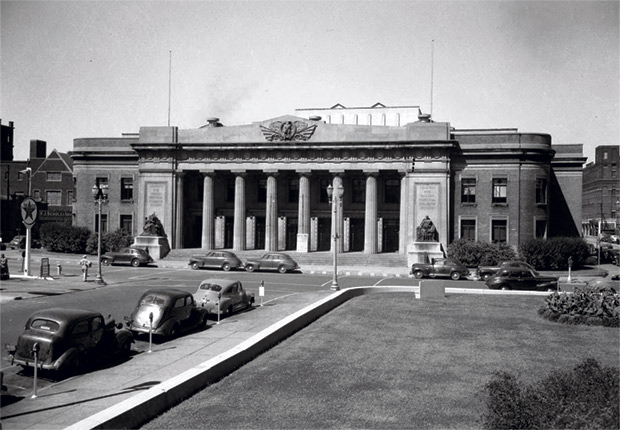 The Coliseum was built as a tribute to the men of Vanderburgh County who served in the Civil and Spanish-American wars. Once approved, buildings such as the H. Schminke store and the F.W. McNeeley company building were torn down to make room. A cornerstone was laid on May 9, 1916, and work on the $180,000 structure (an equivalent of $4.3 million today) began. 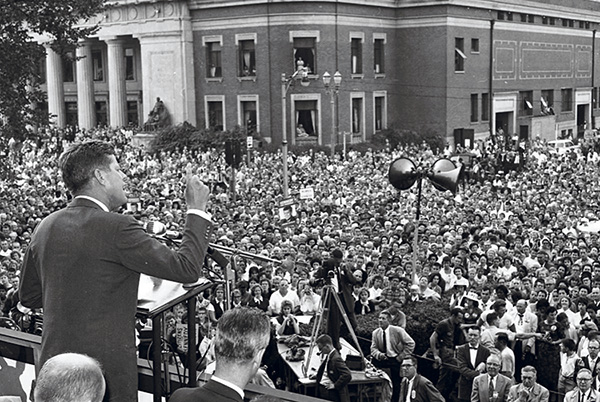 A neoclassical design was provided by Shopbell & Company, making it one of Evansville’s first modern gathering structures at the time. Its planned use was for conventions and other public gatherings. The two bronze monuments placed on each side of the façade entrance were created by sculptor George H. Honig, a native of Rockport, Indiana. The left work, “The Spirit of 1865,” represents the victory of the Union Army while the right, “The Spirit of 1916,” depicts veterans of the Civil War. Just as the U.S. was joining World War I in 1917, Evansville celebrated the completion of the 66,000-square-foot Coliseum.

In 1919, a 5,000-pipe concert organ was installed. The purchase of the instrument was a city affair, with residents spending months gathering enough funds to buy it. Once in place, the organ was named in memory of Milton Z. Tinker, the supervisor of music in Evansville public schools for many years. The organ covered around 900 square feet of floor space in the Coliseum and weighed about 8 tons.

A newspaper article at the time, chronicling its installation for the public, stated, “The memorial Coliseum organ ranks in size with the great organs of this country.” 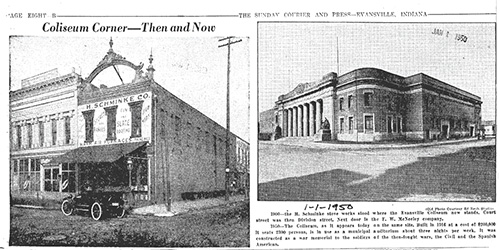 After sitting unused for decades, the University of Evansville purchased the instrument in 2013, dismantled it, and took it to storage on its campus until funds were available to restore it.

Though Evansville has built other event and convention centers, the Soldiers and Sailors Memorial Coliseum continues to play host in Downtown Evansville today, whether it’s for a concert, a sporting event, ballroom dancing, or bingo.