“One day, we were reflecting on how those tacos were the most expensive tacos we were eating, because we had to put in the gas and everything to go there,” says Brown. “We were eating very expensive food, but it was tasty.”

The pair decided it was time for Evansville to have this kind of authentic Mexican cuisine and approached several restaurants in the area about expanding their menus.

“Not to exaggerate, we went to five different restaurants asking if they would do something like that, so we wouldn’t have to travel all that way,” says Brown. “Most of these restaurant owners said Evansville was not ready for that.”

On their way back from a taco trip to Indianapolis, the two decided to use their savings and start a small business to introduce real Mexican food in the area. They would try it for a year. If it worked, great. If it didn’t, they would know Evansville truly wasn’t ready. 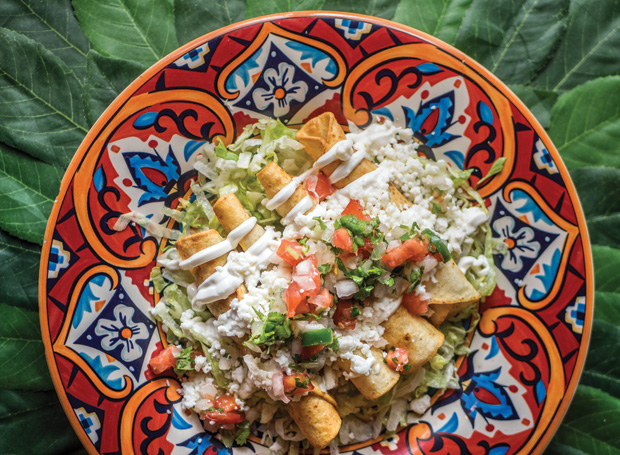 ▲ ¡DELICIOSA! La Campirana opened in June 2015 in the Washington Square Mall food court, and after almost two and a half years already has moved and expanded to a location on Burkhardt Road. Co-owners Abraham Brown and Ezequiel Campos opened the Mexican restaurant with the mission of introducing Evansville to real, authentic Mexican cooking. Customers can try well-known foods like tacos and quesadillas or more unique dishes like flautas, above, or caldo de res, a traditional soup.

The next step was to find a location. During this time, Brown had a meeting at Washington Square Mall’s food court and noticed there was a lot of Latino traffic. He invited a skeptical Campos for coffee at the food court and told him to wait and see for himself. Sure enough, the mall was buzzing with Latino patrons. That very same day they went to the office and asked about leasing what would become the first location of La Campirana.

The restaurant, open since June 2015, now has operated for almost two and a half years. What started as a small venture out of the Washington Square Mall food court quickly grew and moved to 724 N. Burkhardt Road, with a second location planned to open Downtown this fall at the Old Post Office.

“We thought probably if we had 30 to 50 people coming, we would be OK,” says Brown. “The first day we had more than 200 people there at the restaurant, and we didn’t advertise or anything. It never went down from 200. It went up and up and up.”

In less than two weeks after opening La Campirana, Brown and Campos realized one of them needed to quit their job to fully devote themselves to the restaurant. Campos, who had been a manager at the West Side Los Bravos, came on full time, while Brown continued with his work as the director of Latino ministry at Holy Name of Jesus Catholic Church in Henderson, Kentucky, and the community’s Spanish newspaper El Informador Latino.

“I thought it would be just for a couple of months, and maybe I would have to go back to Los Bravos,” says Campos. “It wasn’t easy to bring this to Evansville, because nobody is used to this. But in the end, everybody has had a very good response to us, so here we are.”

Both say they never dreamed they would be in a space the size of their current location, assuming it would take at least three years in the mall before they could expand. La Campirana outgrew the original location after the first year. 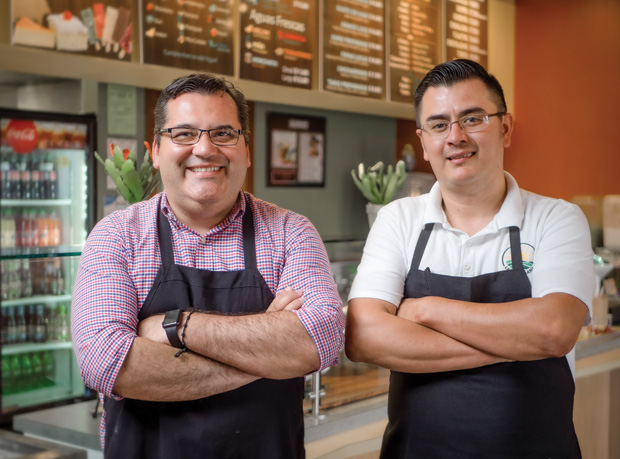 ▲ Mi Casa Es Tu Casa – The idea to open a Mexican restaurant came after Brown and Campos, below, approached five other restaurants about adding more authentic dishes to the menus. They all said Evansville wasn’t ready, and Brown and Campos proved them unequivocally wrong. “We didn’t know what we were doing,” says Brown. “We didn’t have a menu yet or anything, but we knew we wanted to do it.”.

A large portion of the restaurant’s success can be attributed to the support from family, friends, and the local Latino community. To prepare for the opening in 2015, Brown and Campos reached out to friends to get an idea of the foods they were missing from Mexico. They began with a small, simple menu of about six items with six to eight meat options.

Now, the restaurant boasts 11 main dishes. Some of them are foods familiar to many in the U.S., like enchiladas, quesadillas, and street tacos. Others are not so familiar. The torta, for example, is a traditional Mexican-style sandwich made with fresh telera bread, refried beans, choice of meat, mayonnaise, avocado slices, lettuce, tomato, and Chihuahua cheese. 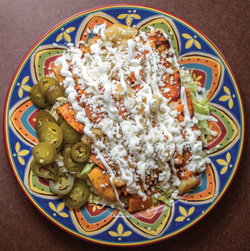 Many of the dishes come from family recipes. The caldo de res, a traditional Mexican soup, came from Brown’s grandmother. The hottest salsa is inspired by Brown’s mother who would crush grilled peppers, tomatoes, onions, and herbs and spices with a mortar and pestle to make the spicy topping. Campos’ mother contributed the recipes for enchiladas and birria — a dish compiled of shredded and marinated rib meat dressed with a traditional spicy sauce and served with rice, a side of fresh cilantro and chopped onions, and corn tortillas.

One item customers won’t find on the menu — chips and salsa.

“It would be very easy for us to bring chips and salsa, because people are asking for chips and salsa,” says Brown. “We really want to offer the same, authentic thing as what you would find in Mexico.”

This means in addition to the many savory dishes offered at La Campirana, diners also can order an assortment of postres (desserts), jugos (juices), and fruit. Common fruits like pineapple, strawberries, mango, and watermelon are found on the menu, but more exotic fruits are offered as well, like jicama and tamarind.

The restaurant also recently expanded to include an ice cream shop with unusual flavors like tamarind, guanábana (soursop), and sweet corn. The most popular item, however, is the paletas (popsicles). La Campirana currently has 23 ice bar flavors but is planning to expand to 28. 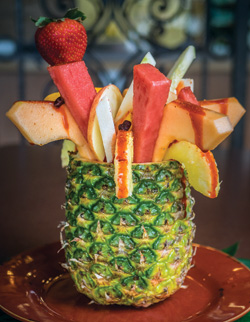 The aguas frescas — literally meaning “fresh water” and somewhere between juice and flavored water — are made fresh daily. The eatery also serves fruit salads covered in an authentic spicy drizzle; biónicos made with fruit, yogurt, and granola; and real fruit smoothies like the spicy mangonada popular throughout Mexico.

“You find fresh fruit in Mexico all the time. Next to a little taco shop there always is a fruit place, or people are just selling fruit on the street,” says Brown. “Yeah, I wanted to do the gorditas and the tacos, but I want to expose Evansville to a different way of seeing fruit — real fruit.”

Every detail of the restaurant is rooted in their mission to bring the real Mexico to the Tri-State. Even the restaurant’s name, like their food, is authentic. Literally, “la campirana” (pronounced cahm-pee-RAH-nah) means “from the countryside.” The food, the restaurant, and the people all are campirana.

Perhaps the biggest testament to the restaurant’s authenticity, however, isn’t even the food or the name but its openness to everyone in the area. The restaurant already has die-hard fans, some who come three or four times a week.

“We know them by name,” says Campos. “We know what they like.”

“As soon as they open the door it’s like five tacos and horchata drink,” says Brown. “We know what they like, and we have had very faithful customers from day one.”

At its core La Campirana is about sharing its culture with the community and transporting customers to the heart of Mexico through fresh, spicy, and genuine flavors.

“I would say that’s the secret — offering not just good food, but the service we’re used to in Mexico,” says Brown. “They’re part of a big family, as you would come to eat at my mom’s table. We like to show that to everybody. It’s like coming to our family table.”