Robert Hartman fought in the German Rhine Valley during World War II, published a children’s book, and invented the crushed ice dispenser during his long career at Whirlpool, but one of his proudest accomplishments during his 92 years is a series of drawings of Evansville landmarks.

“I was kind of a teacher’s pet,” he says. “This lady let two of us go off campus. We went to the Mead Johnson terminal and sketched the boats.”

Each of Hartman’s drawings — the steamboat, carousel, Mead Johnson terminal, Pagoda, and old mill — not only hold an important place in the landscape of the city but also have a personal connection to Hartman. 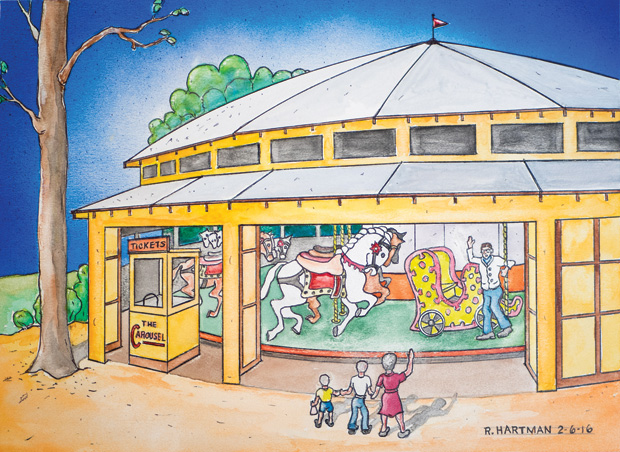 ▲ BOB OF ALL TRADES // No one has Evansville pride quite like Robert Hartman. The West Sider worked in the drafting department of Whirlpool until his retirement in 1986, then used his drawing skills to create pieces based on River City landmarks. Many of the drawings are from memory, but others were drawn from photographs Hartman took himself or found at the library.

“That mill used to be on Pennsylvania Street,” says Hartman. “During the Depression, a lot of us West Siders used to get corn cobs down there and mix them with coal. It was cheap heat.” 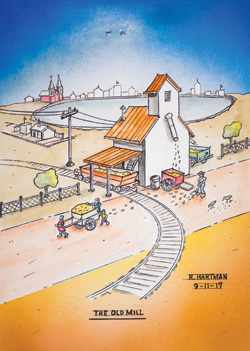 Some of the drawings, like the mill, Hartman drew from memory. Others were copied from photographs he took himself or found at the library, like the Pagoda and Mesker Zoo carousel.

“During the summer, we would get together with some of the neighbor kids and would walk to Mesker Park at noon,” says Hartman. “My dad also worked out there. He was a painter. He would run the merry-go-round so the operator could go to lunch, and we got to ride for free. Otherwise we wouldn’t have been able to ride it.”

Hartman sketches his drawings and colors them using airbrush paints, a technique he used while working with Whirlpool. After his retirement from the company in 1986, he bought the art equipment to use for personal projects like his series on Evansville.

His series highlights the history that remains in Evansville and the history that might otherwise not be documented. While Hartman doesn’t sell any of his work, he loves sharing his art with the community in hopes of preserving landmarks and memories.

“A lot of these things you can’t find a good picture of,” says Hartman. “I’ve given a lot of them away.” 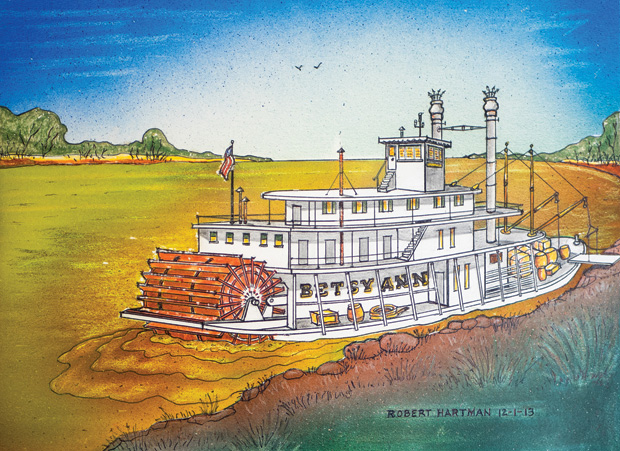