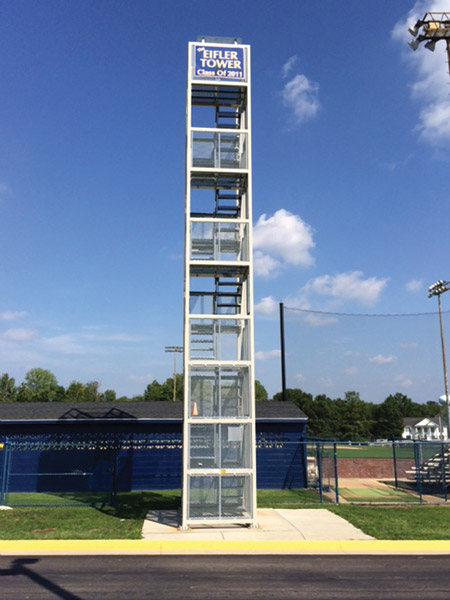 A year after Castle High School installed a new 40-foot band tower, the senior class presented the name Eifler to the structure as their senior gift.

“It was very cool,” says Mark Eifler, a band director at Castle High School since 2003. Eifler co-directs with Tom Dean. “I’ve never had a structure named after me before.”

Construction began on the tower in 2007 by Educational Steel Products Inc., and it was installed on the band’s practice field in 2009. The Warrick County School Corp. funded the project, and at that time it was one of the largest band towers in the country since the field itself sits a foot higher than most stadiums.

“It was built so we can see the entire field from a glance,” says Eifler, who uses the tower along with other band faculty. “Most of the venues we perform at have a much higher vantage point, so this is similar to the view of bigger stadium.”

The Castle marching band is a class-A band, meaning about 200 students are involved in the program each year and compete at both state and national levels. Before the tower was built, the band directors rented a levy lift at a discount, but the option wasn’t safe or cost-effective. Now, they use a wireless speaker system to talk directly to someone on the field from the tower, and credit the structure with improving performances.

“It certainly has been a large advantage,” says Eifler. “And it has certainly facilitated our rehearsals and to some extent, the complexity of our designs.”