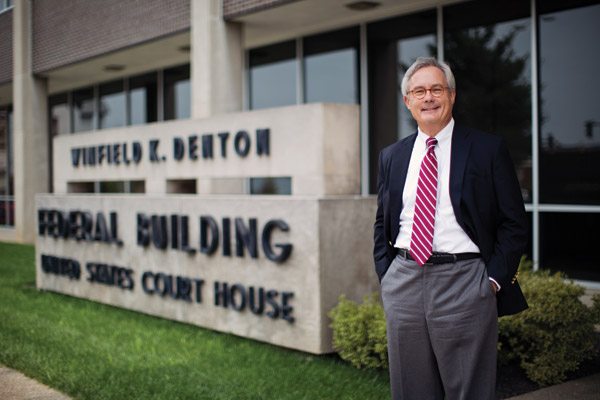 Naturalization ceremonies are among Richard Young’s favorite moments. As a U.S. District Judge, Young gets to preside over the moment when immigrants are finally granted U.S. citizenship. He likes them because everybody leaves the courtroom happy.

Young, 61, the chief judge for the Southern District of Indiana, usually presides over far more contentious issues. That includes a recent landmark ruling that struck down Indiana’s ban on same-sex marriage. It’s now been stayed. While he’s aware over the uproar his rulings sometimes create, he says it’s simply part of the job of making decisions.

During his college years, being a practicing lawyer never really appealed to Young. Even when he graduated from the George Mason School of Law in Fairfax, Virginia, it was with the intention of using it to help him snag a job on Capitol Hill or with a governmental affairs group.

“Law didn’t catch my interest until I was living and working in Washington, D.C.,” says Young. “Most of my friends in Washington were either in law school or had law degrees. It just opened up so many doors, especially in Washington.  I had no thought of actually practicing law.”

But he ended up doing just that. When in D.C., he had worked briefly in the office of U.S. Rep. Phil Hayes, whose term expired in 1977. In 1980 — and after marrying Hayes’ former administrative assistant — he came to Evansville, his new bride’s hometown, to join his former boss’ law firm as a partner.

For 10 years, Young handled courtroom cases. In doing so, he often argued cases before Circuit Judge William Miller, who Young says was a “mentor, taskmaster, and a friend.” When Miller retired in 1990, Gov. Evan Bayh — Young’s longtime friend — appointed Young to finish the term. In 1998, he was appointed District Court Judge by President Bill Clinton, and has held the Chief Judge title since 2009.

While it’s the courtroom trials that attract public and media attention, Young says most of his time is spent elsewhere.

“Most cases are resolved on paper, through motion practice,” he says.  “When not in the courtroom, I spend a lot of time reading briefs.  I work with some brilliant young law clerks who assist me, and we do a lot of writing.”

For more about the U.S. District Court’s Southern District of Indiana, visit www.insd.uscourts.gov.