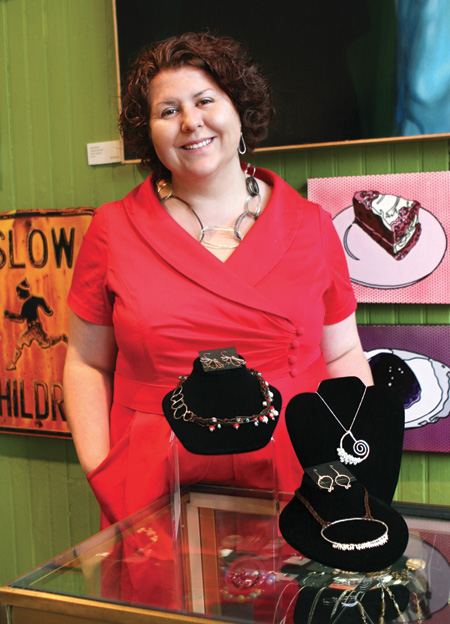 Sara K. Rhoades’ grandfather-in-law Albert had a labor-intensive factory job. In 1984, he retired early, bought a Winnebago with his wife Virginia, and toured the Southwest looking for rocks. The stones became jewelry, made by the couple who had a lifelong passion for fine crafts.

Inspired, they would later pay for Rhoades’ tuition at the Evansville Lapidary Society. Her grandparents “didn’t even ask me,” says Rhoades, who was pursuing an art degree at the University of Southern Indiana while working fulltime. “They wanted someone in the family to do that, and my sister-in-law and husband have no desire to do that kind of work.”

Their influence paid off. Rhoades is a budding fine craftswoman, earning national praise for her jewelry. On Dec. 27, 2011, she landed on the cover of Bead Star as the annual magazine’s Best in Show winner. The award came with a pink sash.

During my first year at Ball State University, I was really lonely. I’m more of a homebody, so I stayed in my dorm room and made weird things out of anything I could find. I took glass bottles and painted them with fingernail polish. My poor roommate.

My mother owns Sandy’s Cakes & Cooking Supplies. She was always drawing and making us clothes and hair bows as kids. The funny thing is that I always rejected that. Now she gives me hell about that.

I loved doing large-scale sculptures. I have six bronzes that were my favorite pieces, but in the real world, making bronze sculptures isn’t that lucrative.

What I do is more fine craft than fine art.

When New Harmony Gallery called me and asked for jewelry, I said, “Nobody’s going to buy it, but that’s fine.” But from there, it’s been nothing but great things.

My daughter watches a lot of Dora the Explorer, and I hate Dora. So, I play with raw materials during episodes. I take some less-expensive materials and see if it will work. If it does, then I recreate it with more expensive gemstones.

Even if a piece doesn’t work for me, I’ll take it to a show, and usually it is the first thing I sell. I don’t know if that means I have bad taste.

Learn more about Sara and her jewelry at www.skrhoadesdesign.com.