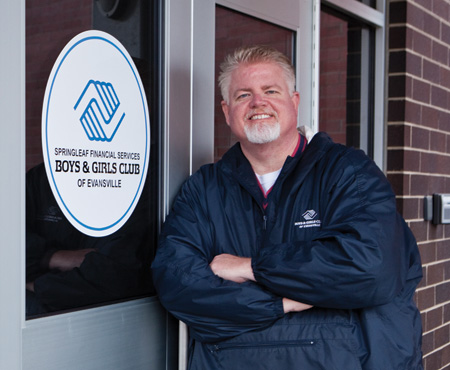 Later this year, Haynie’s Corner Art Festival — a mammoth show covering Evansville’s arts district with painters, sculptors, craftsmen, artisans, and musicians — will turn 10. Another spectacle, the Midwest Dragon Boat Racing Festival, will put teams in long dragon-headed canoes for muscle-draining races. The man behind both parties is Jamie Morris, the resource development director of the Boys & Girls Club of Evansville.

Ten years ago, Jamie Morris sat at a conference and listened to business leaders discuss brain drain in the Tri-State. Morris, a transplant, wanted a diverse city. One speaker, attorney and Evansville Otters owner Bill Bussing, struck a chord with Morris, a music major from the University of Texas. Bussing’s point: If you’re unhappy with the opportunities here, then your responsibility is to make opportunities happen.

Morris loved Evansville. He met his wife Maria, a native, here, and he asked himself, “How can I expect someone from Evansville to start doing something that a Houston native does?” It wouldn’t happen spontaneously, so in 2005, the casual volunteer of Haynie’s Corner Arts Festival became the leader of the September event. Soon, Morris launched the Midwest Dragon Boat Racing Festival — while raising funds for one of the most ambitious efforts for the Boys & Girls Club in its 50-year history: a multimillion-dollar, 33,000-square-foot facility.

Morris’ career in nonprofit work sprung by accident. In 1994, he was at the University of Louisville to earn a master’s degree in music when a friend roped him into writing a grant for a student-led community service project to prevent the accidental killings of children during drive-by shootings in a downtrodden neighborhood. “From the get-go, I had no idea what I was doing,” Morris says, but he won the grant. “I became very passionate about community outreach.” The project developed into a Morris-led service department. In 1996, a nonprofit opportunity lured Morris to Evansville.

From here, Morris has developed his opportunities, and he admits Evansville has helped him. “It was easy to work with the city,” he says. “Everyone was very accessible and helpful. It was a unique experience compared to my experiences in larger cities.”