I’ve been a sports mom for nearly every season (never soccer, though) as my sons have grown to be teenagers. This is the first year, though, I have been a Cub Football mom. My youngest son Jackson, who plays wide receiver and safety on Memorial High School’s 7Th grade cub football team, is the kid I never see.

The team practices six days a week, plays up to two games weekly, and is run alongside the high school football program. It’s the big time. He has the bumps and bruises to prove it. Earlier this week we played North at the beautiful, huge Bundrant Stadium with the turf field. (The turf saved a washing of the already grungy football pants.) We’ve also played Castle North at Castle South’s nice new stadium. Of course, we play at Memorial High School, too.

In the early 1970s, I was a cub football daughter. My father, who had taught for two years what then was termed special education at Lincoln High School, was hired in 1972 to teach special education at Harrison High School. Coaching cub football came along with the job. My father had coaching experience; in Iowa, before we returned to his hometown,

I was in third grade at Caze Elementary. My mother taught at Caze; she was hired there after teaching at Wheeler Elementary her first year in Evansville, before it was torn down in 1972. I was impressed that the boys in the upper grades, whose names I knew from my mother, played on Coach Reeder’s Harrison cub football team. Caze, along with other East Side schools, fed into Harrison, of course, comprising the Harrison cub team. I don’t recall attending many games, but I have great memories of the team photo. 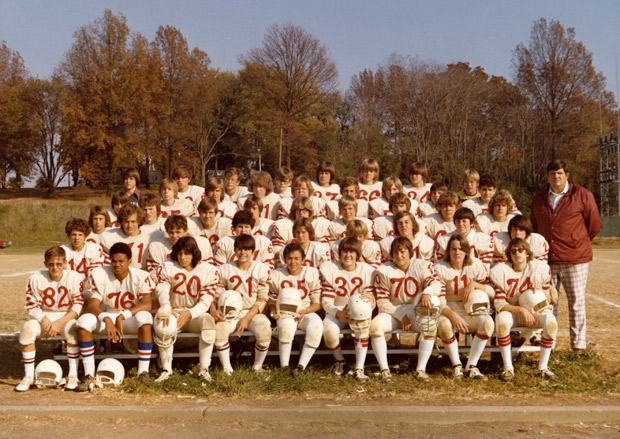 Sports daughter or mom, the sport I most enjoy is the one being played today.