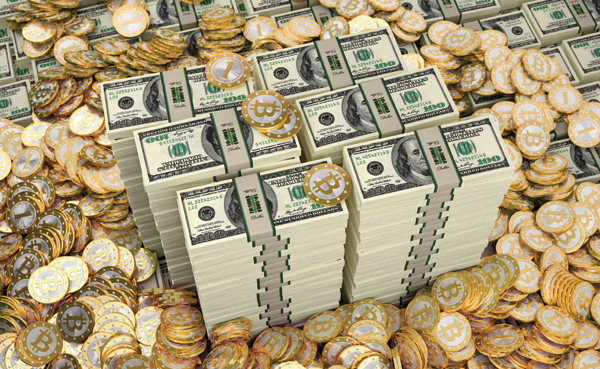 You can’t see them, fold them, drop them in a piggy bank, or even plunk them down on the store counter. Yet Bitcoins (at Bitcoin.com) are the real thing. They were created in 2009 as a way to eliminate credit card fees and bank fees, lower the risk of identity theft, make quicker transactions, and reduce the hassles of converting foreign currency when making international purchases. Users remain anonymous but still make person-to-person transactions over the Internet without the cost of a middleman.

Bitcoin is not the first virtual currency, but it has the most traction. The website GTSpirit reported in December 2013 that a car dealership in Newport Beach, Calif., sold the first 2014 Lamborghini Gallardo to someone in Missouri for 216.8 Bitcoins, worth $209,995 at the time. Overstock.com announced in December 2013 that it plans to start accepting Bitcoins as payment in June 2014, becoming the largest retailer to accept the currency.

Purchasing Bitcoins is like buying stock or gold because the marketplace sets the price. Much like buying shares of a mutual fund, you go to sites such as BitPay, Coinbase, or Mt. Gox to buy Bitcoins. At Coinbase.com, for example, there’s a three-step process to purchasing Bitcoins: (1) sign up for an account, giving you a secure place to store your Bitcoins; (2) connect to your bank account in order to both buy and sell; (3) purchase Bitcoins by allowing Coinbase to debit your bank account. You’ll see the current dollar price for Bitcoins before you buy. Once purchased, Bitcoins are stored in your digital wallet, similar to online banking, but there are no further accounts to set up, no email addresses, passwords, or usernames. Instead, Bitcoin owners must have “public keys” and “private keys.” The private key is used by the owner to complete a transaction, and is kept secret. Otherwise, someone could take your Bitcoins. The public key shows the entire Bitcoin world that a transaction has taken place, preventing anyone from using the same Bitcoins multiple times.

You can simply buy and sell existing Bitcoins, as the example at Coinbase.com shows. Or, as some computer experts have done, you can download an application called a Bitcoin Miner and attempt to generate Bitcoins yourself. The process involves a slow, complex mathematical calculation that tallies up and certifies all Bitcoin transactions around the world. If your computer solves the puzzle before anyone else, you earn about 25 Bitcoins as payment. But the payoff doesn’t occur often.  Bitcoins are “mined” at a limited rate so that the value won’t be lowered by swamping the market with too many of them.
Here is a brief explanation of how a Bitcoin transaction works: Jane wants to buy computers for her business, and Joe has a computer sales business that accepts Bitcoins. Jane asks for Joe’s public key information. Jane agrees on the purchase price and now is able to send a transaction message to Joe, who accepts it. Jane finalizes the deal with her private key, which transfers Bitcoins to Joe. Bitcoin software then uses Jane’s public key to broadcast a transaction for all in the Bitcoin network to see. While the public key provides transparency, it does not reveal the name of the owner.

According to Forbes, one Bitcoin was worth as little as $2 in 2011. Many changes have occurred since then. CNN reported that a Bitcoin was priced at more than $1,000 in November 2013. Also in November, the U.S. Justice Department declared Bitcoins as a “legal means of exchange.” By late December, their value had tumbled more than 20 percent after The People’s Bank of China said China would not accept virtual currency because of risks to buyers and sellers. In addition to using Bitcoins wherever other people or merchants accept them, you also can turn them into dollars, euros, and yen, but obviously not into Chinese yuan.

As futuristic as Bitcoins sound, they already have caught the attention of the U.S. Senate and Federal Reserve. Fed chairman Ben Bernanke wrote in a letter last fall to the Senate Committee on Homeland Security and Governmental Affairs that virtual currencies “… may hold long-term promise, particularly if the innovations promote a faster, more secure, and more efficient payment system.”

Let’s go back to that word “faster” for a minute. Faster transactions can be harder to track, and in Bitcoin’s case, there is no Securities and Exchange Commission or Federal Trade Commission to regulate users. That’s why Bitcoin looks like a money launderer’s dream, and that’s why the Senate held hearings last fall to learn more about virtual currencies so they can keep up with drug dealers, gunrunners, and potential terrorists. In October, federal prosecutors indicted Ross William Ulbricht in San Francisco. They say he is the founder of Silk Road, a website that allows users to buy and sell illegal drugs. The Silk Road website made its transactions using Bitcoins, which prosecutors say provided Silk Road’s suppliers and customers with a cover from detection.

Finding someone in the Evansville area who has dealt directly with Bitcoin is difficult, but that’s not surprising. After all, the currency is designed to be used directly between anonymous individuals, or individuals and merchants. A list of retailers at SpendBitcoins.com shows more than 100 businesses that accept bitcoins, from Stomp Romp Guitars in New Hampshire to ASAP Stuff in Australia. But you won’t find McDonald’s, Wal-Mart, Best Buy, or any other well-known business on the list. The two largest local banks, Old National and Fifth Third, say no one on their staff deals with virtual currencies. Professors of finance at the University of Evansville and University of Southern Indiana say they understand how virtual currency works but admit they haven’t seen it in action.

“I believe traditional merchant account services such as those provided by Fifth Third will not offer such services (for Bitcoin users) for the lack of legal guidelines, taxes, etc.,” says Khaled Elkhal, associate professor of finance at USI.

Like the currency itself, the identity of Bitcoin’s inventor remains both intriguing and shadowy. The creator of the original software is listed as Satoshi Nakamoto, whom no one has ever seen. Many believe “he” actually is a group of computer programmers who formed the enterprise and now own about $1.1 billion in Bitcoins. The question is whether their investment will hold up, and lead to cheaper, quicker ways to purchase goods and services, or fizzle into oblivion like the $2 bill. Bitcoins already have captured the attention of the Sacramento Kings, however. The California basketball team will become the first major professional sports franchise to accept Bitcoins for its products.