Yvette Walts is the kind of person who greets a new acquaintance with a hug instead of a handshake. So imagine the petite, peppy blonde’s surprise when she found herself depicted as the villain of “Abby’s Ultimate Dance Competition,” a Lifetime TV reality show featuring infamous “Dance Moms” star Abby Lee Miller.

“It was a big shock to my system,” says Walts, a teacher and choreographer with Evansville’s THR!VE Dance Company. Walts, a former dancer and elite-level gymnast, appeared on the show in 2012 with her daughter, Hadley, after a competition director recommended the duo to Lifetime producers who were casting a new show. Out of 2,000 mother-daughter pairs who applied, 12 — including the Waltses — were chosen to film in Los Angeles. In addition to Yvette and Hadley’s roles on “Abby’s Ultimate Dance Competition,” they also were featured in several episodes of “Dance Moms” in 2013 and 2014.

Although Walts gained national fame on TV, and former THR!VE dancers have gone on to performance careers with the likes of Cirque du Soleil, the Indianapolis Colts cheerleaders, and Odyssey Dance Theatre, her current focus is right here at home in Evansville. She’s currently busy developing the company’s new recreational program for dancers ages 2 to 18, increasing THR!VE’s community presence through outreach performances, and traveling with the competitive dance team. 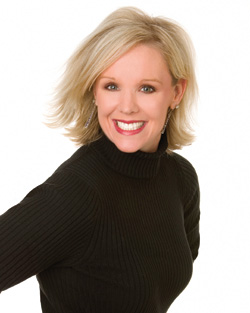 Walts lives on the North Side with her husband, Mark, a Toyota Motor Manufacturing Indiana employee in Princeton, Indiana, and their daughter Hadley, now 14, an accomplished dancer and golfer at North High School.

It’s hard to imagine you portrayed as a villain.
That’s the magic of Hollywood: They can take Positive Polly and make her look really bad, and market her so they can sell more commercials. … I was the only dance teacher who had a child in the competition. To some moms, especially really insecure moms, it was an unfair advantage. I was such an easy target for people to feel uneasy about. Everyone was there for their child to win $100,000, and we all knew there was only going to be one winner.
(During the audition in New York), Hadley and I both had to take a psych evaluation. I just thought they were doing it to see if we could withstand the pressure of the show. I didn’t realize they were analyzing our character. When we got to L.A., I saw some papers, and my name was on one of them. Beside my name, it said “professional, perfectionist.” On another mom’s, it said “emotional mom.” They’re so brilliant, these producers — they want characters who don’t match. They’ve got it down to a science.

What do you wish the casual viewer knew about reality TV?
There was not one time someone handed me a piece of paper and said, ‘Memorize this.’ It’s not scripted, but it’s set up. … They keep everyone separated off camera, and all electronics are confiscated upon arrival. They don’t want you to be able to call back home and let steam off. They’re brilliant through the whole process. What people don’t see is that as intense as it is, we as characters and cast members were treated really, really well. It was an experience we’ll never forget.

What do you wish those viewers knew about you?
I think how I came across on TV is completely opposite of what I live in real life, as someone who looks at the glass at half full. It looked like I was vindictive toward children when children are truly my life and livelihood. … My job is to help build them, not break them.

Both on television and to your dancers here in Evansville, you’re known for your motivational sayings such as “You gotta risk it to get the biscuit!” Where did those originate?
I love to read motivational things, and I love to inspire kids, so I always say fun stuff like, “You’re not stressed out, you’re blessed out!” Sometimes I’ll make them up myself, and other times I read them. You know, “Go the extra mile because it’s never crowded.” Most people today do just enough so they don’t get fired. So most employers pay you just enough so you won’t quit. Why is America like that? Nothing in life is free, so I think: Are you being all that you can be? Then all that goodness will come back to you.

You’re traveling extensively with THR!VE right now, and you stay busy teaching, choreographing, and even judging competitions. Where do you find calm and inspiration?
Now that is a class I’m looking to take. (laughs) That is the million-dollar question. I’m still looking! I do love to work out — Molly (Adams, my THR!VE business partner and fellow choreographer) and I meet at the gym at least four times a week. That’s where I find my zen. I just think I need to keep leading by example and keep in good physical shape. I don’t mean appearance-wise; I mean a healthy heart and being able to keep up with the kids in the studio.

What do you hope to instill in your dancers?
I’m not asking you to be the best dancer; I’m just asking you to be the best dancer you can be. I’m going to teach you how to set goals and strive for excellence in all you do.
I think dance is so valuable and important. There’s so much more than just performing. … That does not sell commercials, but I was born and raised here, and that’s how I can help the community.