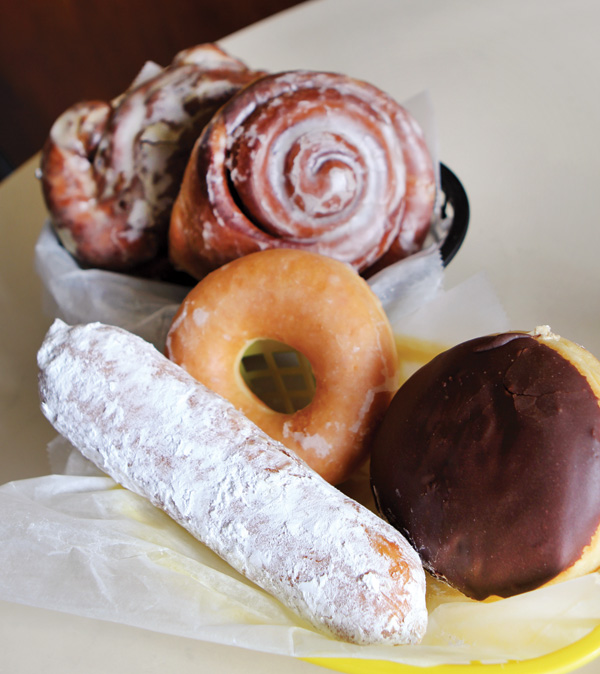 The unique name brings customers in and the donuts make them stay.

White Squirrel Donuts, located at 311 Main St. in Rockport, Indiana, was opened in May 2014 by owners Terry and Suzanne Carney. Its name was born from the donut shop’s time as a former bar, Two Whelan’s Bar & Grill, when a squirrel managed to find its way inside the apartment upstairs and the Rockport community became enthralled in its escape. Charlie Finnacy, the Lincoln Village Museum curator, named the squirrel Cletus and gave previous owners Guy and Dot Whelan a stuffed animal as a joke.

Today, the legend of Cletus lives on in the donut shop’s two signature donuts — the White Squirrel and The Cletus.

The White Squirrel is a Long John that’s nearly a foot-long, covered with powdered sugar, and filled with a homemade peanut butter cream. The Cletus is a Bismarck or Berliner donut, which is a filled pastry resembling a donut with no hole, has chocolate icing and a peanut butter cream filling. The peanut butter filling is inspired by Terry and Suzanne’s love for Reese’s Peanut Butter Cups. The cream, glaze, icing, and dough all are homemade.

Each morning, Terry, a trained chef who studied at Elizabethtown Community & Technical College and former U.S. Army firefighter, wakes up at midnight to begin making 25 pounds of dough and preparing ingredients for the day. The shop opens at 6 a.m. Tuesday through Saturday. Customers can watch through a viewing window into the kitchen as donuts are being made. They sell each morning until they run out. White Squirrel recently began offering salads in addition to soups, sandwiches, even those with special twists such as the grilled cheese donut, made with cheddar cheese melted on a grilled sliced glazed donut.

The bakery offers delivery within a 5-mile radius and curbside service, and encourages youth groups or churches to use the space for fellowship.