While artists travel the world wowing audiences with music, dance, and colorful costumes, Shen Yun cannot be performed in China. According to a Shen Yun press release, China’s Communist Party has taken aim at destroying traditional cultures. In 2006, a group of ethnic Chinese artists came together in New York City to revive genuine traditional culture, and from it, Shen Yun Performing Arts was born. The music and dance company received praise and eventually began performing to sold-out shows.

More than 10 years later, Shen Yun now has five troupes of nearly 100 performers — including dancers, vocalists, and orchestral members — who perform more than 400 shows per year in cities across the U.S., Europe, and Asia.

“China has many talented dancers, but the choreographers aren’t allowed to choreograph any traditional pieces for them to perform,” says principal dancer and choreographer Yungchia Chen.

Hao Feng is a Shen Yun presenter who travels throughout the Midwest to educate host communities about the art and stories behind the dance production.

“Shen Yun has put 10 years of effort to revive Chinese traditional culture which had been destroyed by the Communist Party,” says Feng, who says he has hopes Shen Yun soon will be allowed in his native country. “China is changing.”

Shen Yun means “the beauty of divine beings dancing.” Segments of the show are five to eight minutes long, each offering a glimpse into 20 subsections of Chinese history, legend, or culture. Digital screens behind performers change with each scene; costumes also change to reflect each story and dynasty portrayed.

Feng says the performances bring people together in an age when current events and turmoil in the world tend to cause divides.

“It touches people’s hearts. It moves them to tears,” says Feng, whose son Steven Wang is a principal dancer in one of the Shen Yun dance troupes. “It’s very pure. It is more of what the world needs.”

He says Shen Yun shows offer something for all ages, making it a family-friendly show.

“Kids like this. It’s very entertaining, very educational,” says Feng, who adds the vivid colors and impressive acrobatics are unique to Shen Yun. “It’s like opening a door to a new world. That’s why people like it.”

For more information about Shen Yun, visit shenyunperformingarts.org or oldnationaleventsplaza.com. 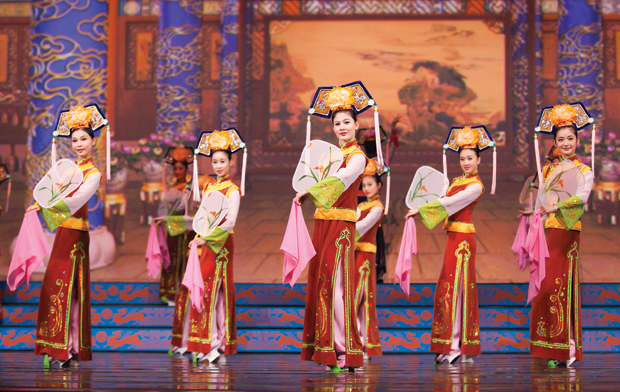 ▲ Performers portray the elegant imperial princesses and the daughters of the Manchurian aristocracy from the Qing dynasty (1644-1911).
Share
Facebook
Twitter
Previous article“Everybody’s so different, I haven’t changed”
Next articleHot and Heavy